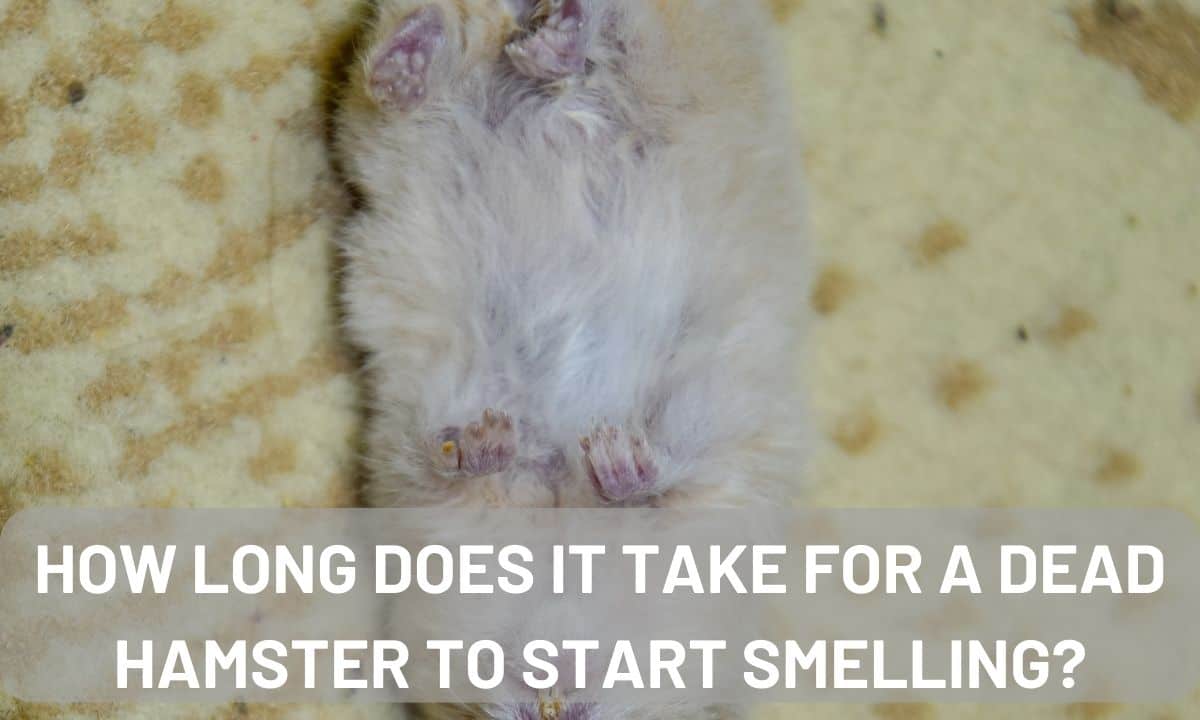 Developing an emotional bond with a pet hamster can be healing and wholesome. Although a hamster is not as socially interactive as a dog or cat, it can show attachment, love, and attraction nonetheless.

However, like all other pets, your hamster’s lifespan is also limited. The problem lies in the fact that hamsters are known to play dead when they’re stressed out or feel threatened.

What’s more, they can stay in this state for hours on end. So do you know whether your hamster is playing dead or has gone to meet its maker? 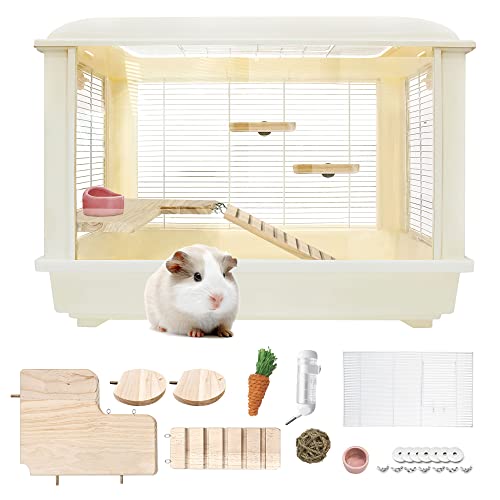 How Long Does It Take for a Dead Hamster to Start Smelling?

If you have a pet hamster living in a glass box or a cage in your room, you probably know its usual routine, natural instincts, and common habits.

Although most people do not spend as much time with a hamster as they would with a dog, they still enjoy and cherish the company of a furry little friend who can be quite expressive and loving.

However, unfortunately, most hamster breeds do not live too long. While your house cat may be healthy and thriving at ten, most hamsters in the USA are considered old when they cross the one-year mark.

Usually, once a hamster is around a year and a half old, the owner can easily notice some characteristic differences in its behavior, diet, physical activity, and interactions.

However, although most devoted pet owners know when their hamster is not doing too well, they are sometimes unable to tell when it has passed away.

Instead, they might believe that their little pet is habitually playing dead and will recover soon.

Eventually, after almost three days, when the unpleasant odor of a dead hamster begins to fill up the cage and expel into the owner’s living space, they notice that their pet is undoubtedly dead.

Continue reading to learn more about hamster deaths in captivity and why pet owners fail to notice a dead hamster on time.

Moreover, the article will elaborate on how long it will take for a dead hamster to start smelling and what you can do to ensure your hamster is actually dead and not just playing dead.

Finally, the article will shed light on how you can properly and respectfully dispose of a dead pet hamster that will give you some necessary closure while also ensuring your safety.

Reasons Leading to the Death of a Pet Hamster in Captivity

Being a pet parent to a hamster can be therapeutic at times. Most people enjoy carrying their little companions in their palms, pockets, and even inside their shirts.

If your pet hamster is sufficiently familiar with you, it will certainly enjoy the affection and closeness and will not shy from returning the love.

However, no matter how beautiful the relationship with a pet hamster is, it is important to remember that like all living beings, a pet hamster is bound to die eventually.

While most people usually accept their pet hamster’s death and try to move on, it is important to know what caused your hamster to die so you can perhaps try to prevent an unnatural or avoidable death of a future pet hamster.

Some of the common reasons for the death of a pet hamster are as follows: 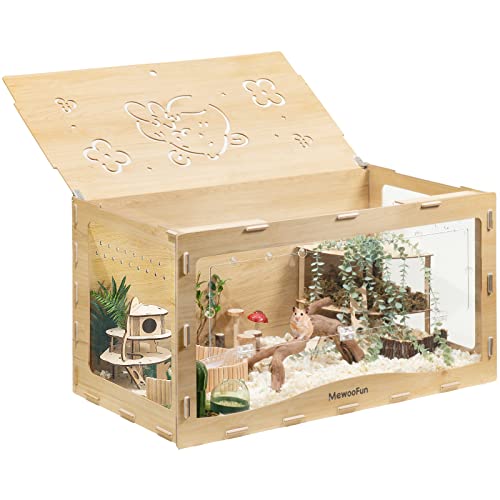 Read Difference Between a Mouse and a Hamster

Why Do Many Pet Owners Fail to Notice a Dead Hamster on Time?

The main reason most hamster owners cannot notice their fur baby’s death on time is because hamsters have an instinctual habit of playing dead.

Most pet owners caring for a hamster for the first time usually have no idea what causes their pets to play dead. According to them, their hamster is simply being playful and acting in a natural way.

However, they do not know that a healthy and happy pet hamster will not play dead for no reason. Instead, this unique action can be triggered due to certain stimuli such as fear, stress, or anxiety.

When a hamster cannot find a place to hide after experiencing fear or a threat, it will pretend to be dead to deal with the situation.

While some owners find it normal and even cute, the main problem here is that a hamster playing dead is just as still and frozen as a dead one. Usually, it will take anything between a few seconds to multiple hours for a hamster to wake up and act normal again.

Hence, at times, when the pet hamster has really died, the owner keeps assuming that their pet is simply playing dead.

As a result, they fail to notice their deceased pet on time and only pay attention once when the dead hamster’s odor invades their living space.

Read Why Is My Hamster Crying?

How Long Will It Take for a Dead Hamster to Start Smelling?

If you have ever visited a pet store, you probably have seen just how wonderful and well-designed a hamster’s cage is. It comes with a water stand, and proper bedding and can even be temperature regulated.

Hence, their adequate, clean, and sufficiently dry environments slow down the decomposition process when a pet hamster dies in the cage.

As a result, even though your pet hamster has been dead for a while, it will take almost three days for the body to decay enough to release a notable odor.

However, if the pet owner pays sufficient attention to their hamster, they can detect the smell of a decaying body when they examine the hamster within a day.

On the contrary, when a hamster dies in the wild, their bodies are usually not protected against decomposing bacteria, wetness, and insects.

Hence, their decaying process is much faster, and their bodies start to smell in just a few hours. 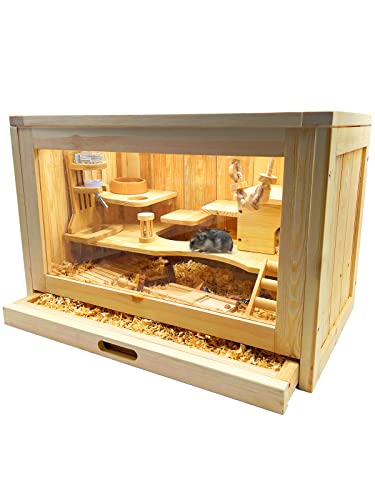 What Can a Pet Owner Do to Ensure Their Pet Hamster is Dead and Not Just Playing Dead?

As the pet hamster gets older, their owners get used to their reduced activity, isolated behavior, low diet, and lack of energy.

Hence, it does not seem weird or abnormal when their pet hamster sleeps for extended periods of time without moving much. As a result, it becomes very easy to miss a dead hamster until it begins to smell.

However, there have been instances when pet hamsters are assumed to be dead while they are playing dead. If the hamster does not snap out of that state on time, it could get mistakenly buried or thrown away.

Hence, you must check carefully whether your fur baby is playing dead, is sick, or is actually dead.

The best way to help a hamster come out of its frozen state as it plays dead is by warming it up. You do not need to expose the hamster to direct heat; instead, you can turn on an infrared lamp above it.

If the warmed-up hamster shows any signs of movement or life, you can take it to a nearby vet for a check-up.

However, if the hamster remains frozen and dead despite being in a warm environment, your hamster has effectively kicked the bucket.

Read How To Take Care of a Winter White Hamster?

Losing a pet that has been a companion or a friend in need is never easy. Hence, the owner must dispose of their hamster the right way to get some closure.

However, apart from the emotional aspect, proper disposal is also extremely important to eliminate the chances of the owner catching any dangerous infection or diseases from their decaying dead pet.

To do this, one should follow the tips below:

If the owner of a pet hamster has gotten used to its slow and low-energy behavior, they usually fail to notice when it is dead. Eventually, when the hamster decays for three or more days, the foul odor catches the owner’s attention.

At this point, the owner must dispose of their dead hamster in a respectable yet responsible way to eliminate the chances of catching an infection.