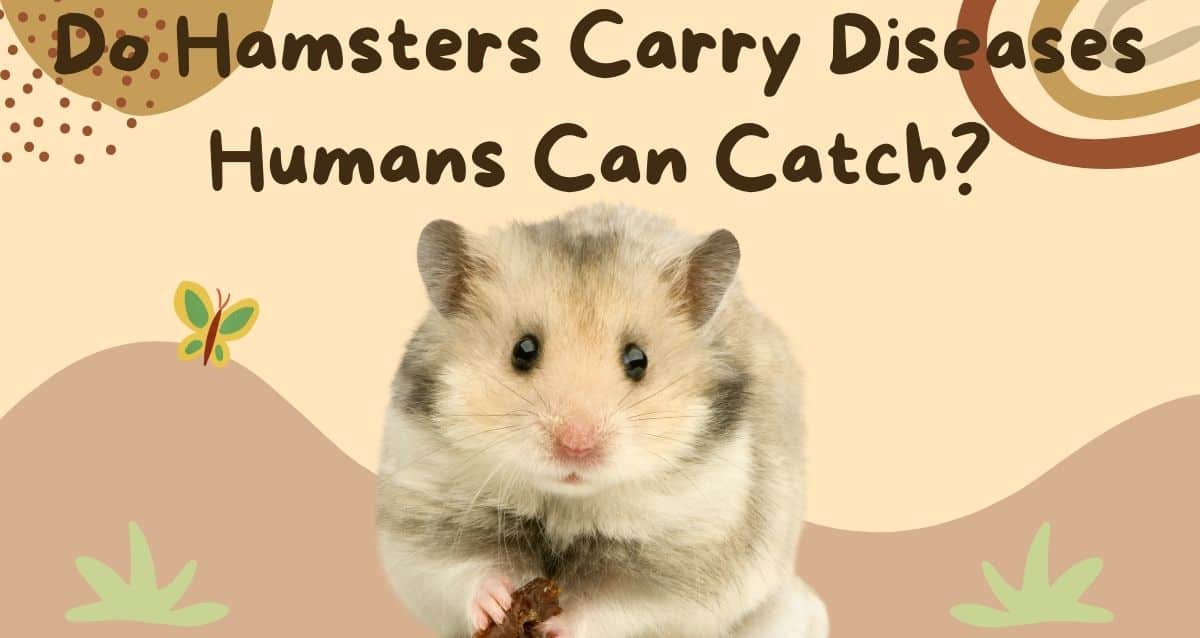 Hamsters can be hard to resist. They are among the most lovable animals around the globe. Despite their limited number, hamsters are among the top pet choices for many pet lovers across various states of the U.S., including California, Virginia, and Texas.

While there is no harm in keeping them as house pets, hamsters, when sick, can cause problems. Can hamsters transfer diseases to humans? We are here to answer this question with all the details you should know.

Hamsters are among those animals that can carry and transmit diseases to humans. The common conditions include Ringworm, Tapeworm, Tularemia, COVID-19, and more.

If you have pet hamsters or plan to keep a bunch soon, you may want to check their health status before deciding. Sick hamsters can transfer the disease upon human interaction.

Diseases Hamsters Can Transfer to Humans

Here, we have covered a list of all the hamster diseases that can transfer to humans if left untreated.

Ringworm is a fungal disease caused by Trichophyton mentagrophytes and Microsporum fungi species. The disease is often mistaken for a worm-based illness.

Since it is a fungal disease, animals have a greater chance of catching and transferring it to other animals. Hamsters often live in the wild, increasing the chances of their interaction with other disease-carrier animals.

When infected, ringworm-carrier hamsters may or may not show visible signs. Some types develop bald patches on the skin. These patches typically have red edges, making them flaky.

Leaving hamsters outdoors for extended hours can increase the chances of fungal attacks. Once infected, they can transmit the infection to their cage, other hamsters, and humans.

To avoid catching the disease from your pet hamsters, you may want to use sterilized gloves to interact with them and clean their cage. You may also replace the bedding more often to minimize the chances of disease transfer.

Once done with cleaning, you can remove the gloves and dispose of them to avoid the risk of transferring infection.

Tapeworm is an infection caused by parasitic worms in humans and animals. Like ringworm, tapeworms can transfer from one carrier to another upon close interactions.

Most animals living in the wild catch the infection naturally or from the fur or skin of other animals. In most cases, there are no apparent signs of the condition.

Tapeworms live in the intestines of animals or humans. Although they may not affect humans in most cases, hamsters can suffer from lymph node infection, intestine inflammation, and blockage.

Despite the rare chances of your pet hamsters getting infected, you may want to proceed with precaution while interacting with them.

Tapeworms can transfer by even the smallest skin interactions. You may directly avoid their interaction with hamsters if you have kids at home.

COVID-19 needs no introduction. The virus has taken the globe by infectious storm, causing the deaths of thousands of people across every country.

Since 2019, the deadly virus has infected all the major parts of the country. Despite the vaccination, the virus developed different forms that joined the ongoing storm, infecting more and more people.

However, not many may know that some animals can transfer the virus to humans upon interaction. Hamsters are among the unfortunate COVID carriers that can affect humans.

According to a recently published study, hamsters can spread the virus among other hamsters. Moreover, infected hamsters can transmit it to humans.

The study also concluded that hamsters were the primary sources of transmitting coronavirus to humans. The chances of spreading the virus increase in cold temperatures.

If you reside in North Dakota or South Dakota, you may want to be more careful with your pet hamsters. These regions are among the coldest areas of the U.S., making it more likely for hamsters to catch and transmit diseases.

Tularemia is a bacterial disease transmitted from animals like hamsters to humans. It is a rare infection that attacks the animal’s skin, lymph nodes, eyes, and lungs.

Hamsters generally catch the bacterium from mites by close interactions in the wild. Once infected, they can develop severe symptoms leading to rough hair coats on the skin.

Despite its rare presence, Tularemia can be fatal for humans and animals. Hamsters affected by the disease can die as early as 48 hours.

To avoid catching the contagious bacteria, you may regularly disinfect the house, hamster cages, bedding, and other places where hamsters can reach.

You may immediately consult your doctor to initiate the treatment if transmitted to any family members. Common symptoms include cough, chest pain, poor breathing, and weakness.

Pseudotuberculosis is a bacterial infection that can turn fatal if left untreated. Caused by Yersinia pseudotuberculosis, this hamster disease can transfer from one living creature to another.

Since hamsters like to play in the wild, they are more prone to catching infectious bacteria. Common symptoms include diarrhea, blood infection, weight loss, and general weakness in hamsters.

The disease can affect breathing and organ function in humans. It is crucial to avoid interactions with hamsters carrying the disease.

To avoid the spread of pseudotuberculosis, you may regularly clean and disinfect your house and hamster cages. If you have kids at home, isolating the hamsters in a restricted space can reduce the chances of spread.

Late detection of the disease can lead to fatal conditions. You may consult your pet’s vet to try the necessary remedies at home.

If your family members interact with an infected hamster, you may immediately reach out to your healthcare practitioner and start the treatment.

Salmonellosis is a bacterial digestive disorder that can infect animals in the wild. Caused by salmonella, this bacterial infection can be contagious if left unchecked.

The infectious disorder rarely infects hamsters. However, they can develop the symptoms if they consume food contaminated by the stool of infected insects.

Since the path of its transmission is less likely to occur in most cases, hamsters generally remain safe inside their designated cages.

However, they can transmit the bacteria to humans through contaminated water or food. It is worth noting that not all hamsters develop apparent disease symptoms.

If you reside in the suburbs like Florida, North Carolina, or Arizona and have pet hamsters, you may regularly disinfect their cages, bedding, and food containers to avoid bacterial interaction. Moreover, you may keep them in a rodent-free room.

The common salmonellosis symptoms in humans include abdominal pains, cramps, diarrhea, and fever. Typically, the symptoms start to show in the first three days.

Lymphocytic choriomeningitis is among the most fatal transferrable hamster diseases on the list. It is a viral infection that mostly affects wild mice.

Since hamsters often spend time in the wild, they are likelier to catch the virus from wild mice and develop the disease symptoms.

Once they get infected, hamsters may heal without developing any symptoms. However, worsened cases can lead to excessive weight loss, depressed behavior, and decreased reproduction cycles.

LCM can transfer from hamsters’ urine, saliva, cough, and sneeze droplets. Close human interactions can increase the chances of transmitting the virus.

The common LCM symptoms in humans include flu, spinal cord and brain inflammation, miscarriages, and general weakness. Late detection can lead the patient to death.

If you have LCM-infected hamsters at home, you may want to isolate them in a restricted space, disinfect their cage and bedding, use sterilized gloves, and maintain physical distance.

How to Check If My Hamsters Are Sick?

By interacting with unfavorable environments, hamsters can catch viruses, bacteria, and fungi. Since many like to keep them as house pets, the chances of transmitting diseases can increase.

If you want to get a pet hamster, you may always get it checked before bringing it home. Pet shops often cage pet animals found in the wild. It isn’t easy to analyze their health histories.

If you have a trusted vet in your area, you may take your hamster to the clinic for a general diagnosis and necessary vaccination.

Moreover, you may use disposable gloves to handle hamsters before thoroughly diagnosing them. You can also use disinfectant cloth pieces in your car to avoid spreading diseases.

Can hamsters transfer diseases to humans? The collective answer to this question is yes. We have mentioned some fatal diseases that hamsters can carry and transfer to humans.

If you reside in California, you can find some of the best pet shops to get healthy hamsters for your home. However, the suburban areas of the U.S. may require more precaution due to the increased chances of wild interaction.

If it’s your first time getting pet hamsters, you may want to check out all the details, including their feeding practices, health issues, atmosphere, prevention practices, and more, to make an informed decision.