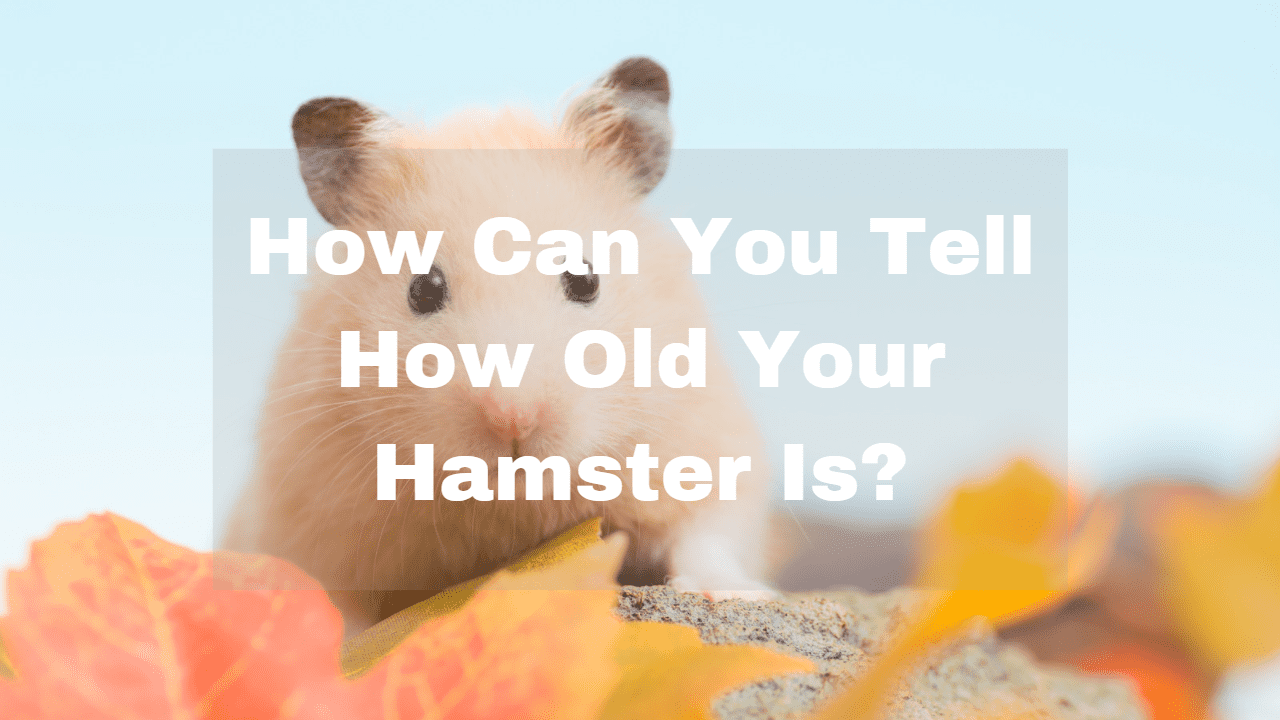 Have you ever wondered how old your hamster is? Unless you managed to get yours the day it was born, telling how old a hamster is can sometimes be more challenging than you’d think. Thankfully, there are some practical steps you can take to determine how old your pet is.

You can tell how old your hamster is by discovering its breed and looking at its eyes, ears, and coat. You can also observe its behavior to see if it’s still depending on its mother, fighting with other hamsters, mating, or experiencing changes in behavior such as lethargy and loss of appetite.

Hamsters are excellent family pets, and knowing their age can better equip you to give them the proper care they need. Although it can be challenging to discover a hamster’s exact age, keep reading to find ways to determine whether your hamster is in the beginning, middle, or end of its life cycle.

How To Tell Your Hamster’s Age

As I briefly mentioned, there are a few simple yet crucial steps you’ll want to take to accurately determine your hamster’s age (or at least age range). Here’s what you’ll need to do:

This knowledge can help you determine if changes in your hamster’s behavior or appearance are indicators that your hamster is aging or if they’re a sign of a more severe illness.

According to Petsmart, there are five types of domestic pet hamsters. Hamsters generally live up to 2 years, with some types of hamsters living up to 3½ years.

Check out the following list of hamster types and their general life expectancy:

2. Look at Your Hamster’s Eyes

Hamsters are born blind, so if your hamster’s eyes are closed, it’s most likely less than seven days old. Newborn hamsters’ eyes won’t open and close periodically; they typically remain shut. If you notice your hamster is starting to open and shut its eyes, then the hamster is around two weeks old.

3. Look at Your Hamster’s Ears

Hamsters are also born deaf. A newborn hamster’s ears will be closed, just like its eyes. Fully grown hamsters’ ears are open and perky. They generally point upward, and you can see them moving. If your hamster’s ears are folded inward toward its body, it’s likely less than two weeks old.

Read How To Tame a Hamster

4. Observe if Your Hamster Is Dependent on Its Mother

Young hamsters are dependent on their mothers for food and protection. If you notice this to be the case, your hamster is probably less than a month old. Newborn hamsters will remain in their mother’s care for about three to four weeks after birth.

Hamsters are born with teeth, and they can technically eat solid foods at about a week old. However, they’ll most likely continue to nurse until they’re about a month old. After about three to four weeks, the hamsters will be mature enough to be separated from their mother.

5. Observe if Your Hamster Fights With Other Hamsters

Newborn hamsters are typically too young to fight with other animals or hamsters. However, if your hamster is fighting with its peers inside the cage, then it’s safe to assume that your pet is at least a month old.

Hamsters will generally start fighting at four to six weeks old. After this age, some hamsters will need to be separated into different cages.

The separation period heavily depends on the hamster’s breed. Although most hamsters will need to be separated from other pets at six weeks, others can still live in groups of the same sex.

At this point, it’s time to move each Syrian hamster to its own cage; otherwise, they’ll fight with other animals in the cage and can even kill other hamsters.

Many pet stores in the United States sell hamster cages, where you can purchase individual enclosures for aggressive hamsters that live alone.

Read Why Is My Hamster Biting Me

It’s important to note that hamsters reach sexual maturity at around four to six weeks old, with female hamsters generally maturing at about six weeks. At this age, hamsters that are safe to live in groups should only be enclosed with groups of the same gender.

If you notice your hamster is attempting to mate, it’s most likely between four weeks and 15 months old. Female hamsters generally tend to become aggressive when breeding, so these behavior changes in your hamster can help you determine its age.

Your hamster’s fur can tell you a lot about its age. Your hamster’s coat can also tell you how healthy it is or if your pet is stressed or sick. A hamster’s fur changes dramatically at the beginning and end of its life. So be sure to observe it carefully to help you determine its age.

Hamsters are born naked and without fur. Their skin is typically pink, and they appear hairless at birth. Their fur won’t start to grow until they’re about five to seven days old.

If your hamster doesn’t have any hair, check out its ears and eyes as well. If the pet is hairless and its eyes and ears are still shut, it’s probably a newborn.

When your hamster starts to grow fur, it will be the same color as its adult coat. A hamster typically has most of its fur by about three to four weeks, when it turns into a fully grown adult hamster. After all the hair comes in, your hamster’s coat should be shiny and thick.

Hamster fur comes in a variety of colors and is dependent on your pet’s breed. Hamsters range from golden brown, gray, white, dark brown, or a mix. Regardless of the color, your hamster’s coat should be bright and healthy-looking.

Hamsters under one year old should continue to maintain their fur length and luster. If you notice that your hamster’s fur generally stays the same length, it’s likely under a year old.

A hamster is in its prime when they’re under one year old. Afterward, your pet is considered to be middle-aged. Your hamster’s coat might start to dull and thin at this age marker as it gets older.

A gradually dulling coat is normal as your hamster ages. Still, if your pet starts to experience noticeable discoloration in its fur, it could signify a serious illness. Be sure to consult your vet if you’re concerned about your hamster’s fur discoloration.

Thinning hair is another sign of a hamster over a year old. Your hamster’s fur will most likely continue to thin until it dies. A particularly thin or consistently thinning coat may indicate that your pet is near the end of its life cycle—between 2 to 3 1/2 years old, depending on the breed.

However, patches of missing or thinning fur can indicate sickness, stress, old age, or other health issues. If you’re concerned about your hamster losing its fur, take it to a vet to find out why this is happening.

Numerous vets across the US are qualified to treat hamsters. Those living in bigger cities like New York, Los Angeles, or Chicago, might be able to choose between a wider range of vets to find the one they feel is most qualified.

However, regardless of where you live, chances are you’ll always be able to contact a professional regarding your hamster-related concerns.

Read How To Tell if a Hamster Is Pregnant

Your hamster’s behavior can tell you a lot about its age. Newborn, adult, and senior hamsters all exhibit distinct behavioral qualities.

Newborn hamster pups won’t do a lot of moving. They’ll typically stay close to their mother and nurse.

At close to two weeks old, hamsters will start to move around in their environment, discovering their own muscles and surroundings. With open eyes and ears, they’re better equipped to explore the world around them.

Healthy adult hamsters are typically energetic and playful. They’re high-energy pets, and you can expect them to be very active.

As previously mentioned, one-year-old hamsters are considered middle-aged, so your pet will likely have the most energy when it’s between six weeks and one year old.

Hamsters are nocturnal creatures, so it’s natural for them to sleep during the day and be highly active at night. Hamsters under one year old will love to play and socialize, and they’lll enjoy exercising on their wheels or scurrying through the house in hamster balls.

After the one-year marker, hamsters’ energy levels may start to decline. You might notice that your hamster sleeps more and isn’t as interested in playing or similarly draining activities. Older hamsters may experience a change in their appetites and begin to lose weight.

It’s common for older hamsters to experience frequent ailments or illnesses. If you notice your hamster is getting sick, it could be due to age.

Hamsters might start to develop other diseases as they get older as well. Monitor your hamster closely and look for patches of hair loss, weight loss, crust around the eyes and nose, and other changes in your hamster’s appearance.

If your pet is experiencing any of these symptoms, it could signify disease or illness.

Hamsters nearing the end of their life may start to become slow and sluggish. At this point in a hamster’s life, it’s normal for them to become disinterested in activities they used to enjoy.

As a hamster nears death, it might experience frequent urination and even urinate or defecate in its nest bedding.

The best way to tell how old your hamster is is to carefully observe it and take notes regarding its appearance and behavior. Look at your hamster’s eyes, ears, and coat, while monitoring its activity level and mannerisms.

Newborn pups will have their eyes and ears closed and stick close to their mother as they nurse. Younger hamsters appear vibrant and full of energy, and most species typically reach their peak at around the 1-year-old mark. On the other hand, older pets may become lethargic and experience thinning or dull fur.