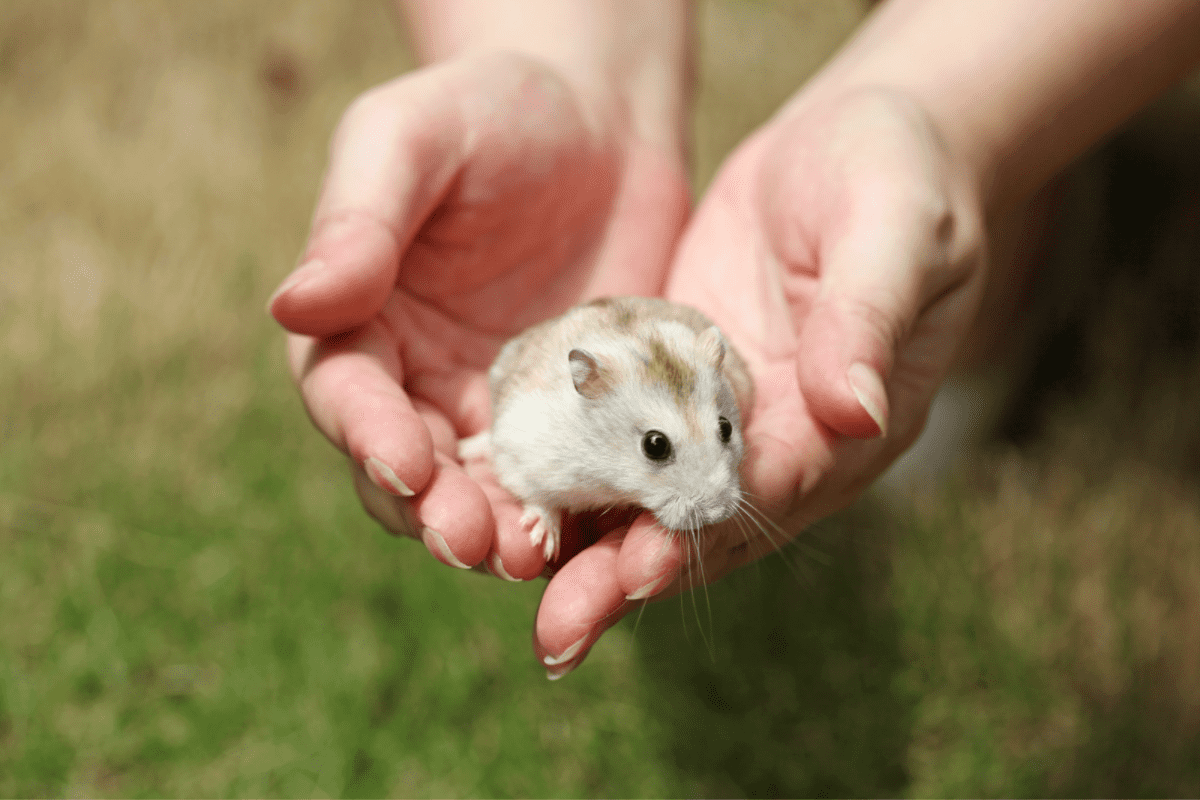 Hamsters are adorable, cuddly creatures that many – kids and adults alike – would want. It seems they can do no harm. However, would you ever think these little bundles of fur could be deadly?

You can die from a hamster bite, but it is incredibly unlikely that you would. Hamster bites are rarely fatal unless you are allergic or the pet carries a deadly disease that they can pass on to you. Proper treatment can prevent infection, which may be more harmful than the bite itself.

This article will discuss why it is rare for hamster bites to be fatal, what possible diseases hamsters can infect humans with through a bite or exposure, and what you can do if your pet rodent bites you.

Animal bites are scary. Not only can they be bloody and painful, but they can also be fatal, as with the cases of rabid dogs. However, not all animal bites kill, especially hamster bites.

Hamster bites can kill humans, but the chances of death are very slim. Their bites rarely break the skin, but an infection may occur when that happens. Thus, prompt treatment, like washing with soap, is necessary. The bite may also be fatal if the hamster is sick or you are allergic to them.

Based on Internet accounts of hamster owners and my own experience, an overwhelming majority of people bitten by a hamster have lived to tell the tale.

Hamster bites are rarely fatal or concerning. Most hamster owners have shared that they have been bitten by their pets a few times before and after prompt treatment, there have been no grave results.

Although there have been stories of people dying after a hamster bite, such as this case of a Singaporean mom and a young girl from Hong Kong, these experiences are infrequent. These people were most likely allergic to the hamster, and the allergens may have induced the extreme result.

For both cases, one cannot say that the hamster did cause their demise. In the case of the girl from Hong Kong, the doctors reported that they are open to the possibility that other health problems may have contributed to her death. The girl was also asthmatic, and people with these conditions are often sensitive to allergens.

As for the woman from Singapore, reports indicate that she never received an autopsy, so the cause of death is still uncertain.

Hamster bites are non-fatal and may also be treated at home often. Thus, there is no need for a hospital visit most of the time. However, if allergies occur, seek emergency help.

Read Where Do Hamsters Live in the Wild?

Can You Be Allergic to Hamster Bites?

As I mentioned in the previous section, there have been two cases of possible deaths due to allergy to the hamster or anaphylactic shock after the bite. Besides these two cases, there have been other accounts of people being allergic to hamsters and their bites, but they have all survived after treatment.

You can be allergic to hamster bites. If you have an allergy to hamsters, you may only suffer minor allergic symptoms. However, if you have a severe allergy, you may develop anaphylactic shock.

Often, people are not aware of what substances or organisms they are allergic to. Some may also develop allergies later in life, even when they were not allergic to these allergens before.

Anaphylactic shock is an extreme and life-threatening reaction to a trigger or allergen. This allergic reaction often happens fast and occurs closely after exposure. Common symptoms include swelling, hives, dizziness, fainting, and rapid heartbeat.

Individuals who have experienced anaphylactic shock recounted redness and swelling around their wounds. They also felt dizziness, hardness of breathing, and other symptoms.

Anaphylaxis can be fatal, especially without prompt treatment. People may have extreme difficulty breathing when their airways get affected. Blood pressure may be erratic, as what happened to the father bitten by a hamster. It may even trigger an asthma attack for asthmatic individuals.

Epinephrine is the treatment provided for these situations, and most people with severe allergies have these on hand. It is crucial to call an ambulance or emergency services if someone suffers from a severe allergic reaction.

Often, you would have minor allergies to triggers before you would experience anaphylaxis due to them. Thus, if you have had some irritation, itchiness, or some other reaction when handling hamsters, it may be a sign that you are allergic to them.

Can Hamsters Pass on Fatal Diseases to Humans?

Besides an allergic reaction, one of the things you may need to be concerned about with a hamster bite is the possible transmission of diseases.

Hamsters can pass on fatal diseases to humans through a bite. One case in Colorado, USA, associated a hamster bite with tularemia. Besides tularemia, these pets may also carry diseases like lymphocytic choriomeningitis.

One of the most concerning illnesses animals can pass on to humans is rabies. This disease is often associated with dog bites. However, most mammals can get rabies if exposed to a carrier.

Rabies is a viral illness often passed on through animal bites, like dogs or cats. In the United States, where most pets require rabies vaccines and rabies cases are at a minimum, it is rare for a pet to have the virus unless exposed to or bitten by an infected wild animal.

Hamsters do not carry rabies. The Centers for Disease Control and Prevention in the USA states that small rodents, like hamsters, are not known to contract and transmit rabies.

Hamsters likely don’t get rabies because it is hard for them to survive the attack of a rabid animal. Thus, it is rare to get rabies from a hamster bite.

Rabies is also not inherent or natural but transmitted from one carrier to another. Hence, if your hamster has had zero to minimal contact with other creatures and wildlife, it is rare to impossible for it to have rabies.

Read How Much Does It Cost To Take a Hamster to the Vet?

While rabies may seem impossible to get from a hamster, tularemia is more probable.

Tularemia or rabbit fever is a bacterial illness caused by Francisella tularensis. Animals can transmit it through an animal bite, inhalation, or consumption of contaminated food or water. Without antibiotic treatment, the disease could be fatal.

Hamsters can pass tularemia through a bite, as evidenced by a case in Colorado, USA. A three-year-old child fell sick after being bitten by a sick hamster. The child survived after antibiotic treatment.

Some of the symptoms exhibited by the boy were fever, malaise, and skin sloughing or shedding off at the wound site. Before this, the family had bought six hamsters, all of which became sick and died. Only one bit the boy and the hamster died shortly after.

Read Why Does My Hamster Smell Bad?

Other Diseases That Hamsters Can Pass On

Tularemia may not be the only disease you might want to watch out for from your hamster.

Most diseases are passed on through contamination. Thus, washing your hands after handling your hamster or their cage is essential. It would also be great if you kept their place clean.

Read How Do I Know if My Hamster Is Happy?

What Should You Do if a Hamster Bites You?

Even though we have talked about a couple of scary things you can get from a hamster bite, in general, most of them can be treated at home and do not result in anything more severe, especially with proper and abrupt treatment.

If a hamster bites you, you should clean the wound with soap and water. If it is not bleeding out, gently squeeze to remove any saliva. Wrap with a bandage to prevent infection. Large or bleeding wounds may need medical help.

If possible, use cold water and antibacterial soap when washing the wound. You may also use an antibiotic ointment to prevent infection.

Bites that did not break skin may only need home treatment and are not concerning. However, if the bite broke the skin and there was bleeding, you may need stitches.

Also, monitor the person for any signs of an allergic reaction. If you have any asthma attacks, swelling, or difficulty breathing, seek medical help immediately. Individuals with known allergies may carry an EpiPen, which you can administer if you know how.

Signs of Infected Wound or Bite

Any wound is susceptible to infection, no matter how small it is. Infections may do more damage, and some can even be fatal.

Take note of some signs of infection for better monitoring and recovery. Some of the most common symptoms include:

If you see any of the said signs, seek a doctor immediately to control the infection.

Why Do Hamsters Bite?

Hamsters can appear so cute and cuddly, and it may be puzzling why they would even bite you. However, there are reasons why they may do so.

Hamsters mostly bite out of stress or fear. They can be sensitive creatures, and changes around them may stress them, leading them to bite. They may also be sick or feel territorial.

Not all hamster bites are the same. Some can be superficial scratches, while others can be large. Some may bleed a lot as well.

How To Prevent Hamster Bites

Often, hamsters only bite when they feel threatened. Hence, you need to know what could trigger them.

Here are some ways you can prevent hamster bites:

Hamster bites are generally non-fatal and would rarely kill anyone at all. However, if you tend to have allergies or your hamster was sick before biting you, you may suffer from anaphylactic shock or from the disease they have passed on to you. In these cases, medical help may be inevitable.

Otherwise, you can treat hamster bites on your own at home. Make sure to clean the wound and dress it to avoid infections. After that, monitor yourself for possible infection. If there are symptoms, seek a doctor immediately.