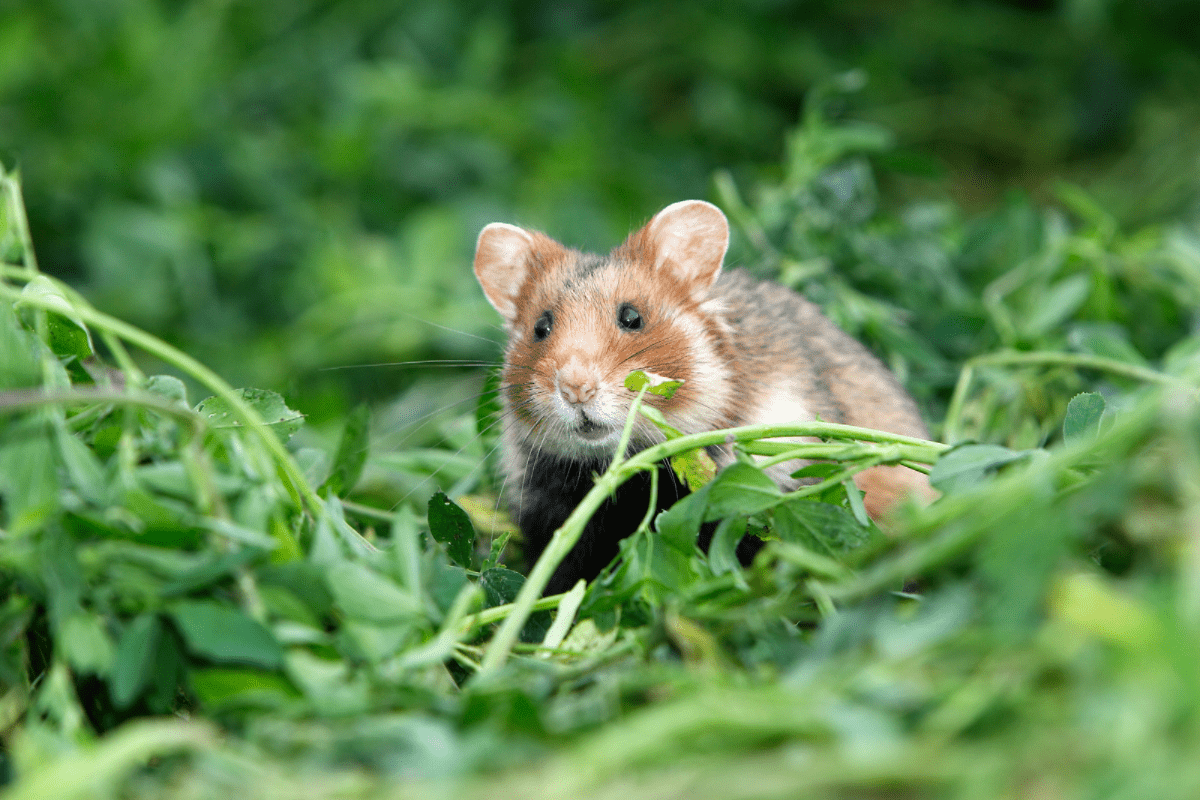 Hamsters are adorable fuzzy rodents that look like they were made to be pets, but they were wild animals long before humans domesticated them. However, here in the USA, we’ve never seen them running around with mice, rats, moles, and other tiny creatures, so where do they come from?

Wild hamsters live in the wild all over the Eurasian continent, mostly in arid regions. European species live across from Belgium to Russia and south to the Mediterranean. Other species live in the Middle East, Russia, China, and Central Asia countries.

In this article, I’ll tell you all about the different wild hamster species, where they live, and some distinctions between wild and domesticated hamsters. So, let’s get into it!

What Regions Do Hamsters Live In in the Wild?

The earliest known wild hamsters come from several regions in the world.

The regions hamsters live in in the wild are the Middle East, western Europe, southeastern Europe, and northern China. However, most American pet hamsters came from northern Syria and southern Turkey.

The earliest known records of wild hamsters, it was written by Scottish physician Patrick Russell in a book called the Natural History of Aleppo, published in 1794.

In 1930, Israel Aharoni captured a female hamster as a scientific pet and learned to breed them in captivity.

However, the word “hamster” itself comes from the German “hamstern,” meaning “to hoard.” This choice of a name reflects the animal’s tendency to hoard food in its mouth and home.

These rodents have 26 species that developed in the wild worldwide. Five have had some of their population caught and domesticated over the centuries. The three most common are the Syrian, the Roborovski dwarf, and the Campbell dwarf.

Hamster Varieties and Where They Live in the Wild

There are many hamster species from Asia, Europe, and Russia. Here are some of the most common varieties and where they live in the wild:

Check out, How Do I Know if My Hamster Is Happy?

Habitats That Wild Hamsters Live in and Their Behaviors

They are also active from dusk to dawn, making them crepuscular creatures. Crepuscular refers to activeness during dawn and dusk. Nocturnal is for nighttime activity, but sometimes people use this term to include any time that’s not broad daylight or diurnal.

Like the pet versions, wild hamsters are gentle but may bite when distressed. They have poor eyesight but a great sense of smell. You may be surprised to hear that their scent glands are on their backs.

They dig extensive tunnels up to ten meters down in their natural habitat. Hamsters use the tunnels for protection, shelter, food storage, and temperature moderation.

Even moderate depths provide coolness in contrast to the surface heat of desert living. It also stays warmer than the surface during winter. So hamsters can remain comfortable while they hibernate.

Some hamsters like the dwarfs are social, while others like Syrians are solitary. However, most hamsters prefer to live alone.

What Do Wild Hamsters Eat?

Wild hamsters eat grass, plants, fruit, seeds, vegetables, insects, and animal remains. They are omnivorous scavengers, and they eat whatever can fit into their large-pouched mouths. If they can’t eat their entire meal at a given moment, they will transport the food to their home for later snacking.

Hamsters have flexible diets. They will forage on the same grasses and broad-leaved herbaceous plants that livestock will eat. They also like seeds, fruits, and vegetables like a domestic hamster.

Yet wild hamsters take having a flexible diet one step further. They will eat frogs, snakes, lizards, and insects.

Even though you would feed your domestic hamster vegetables and fruits, wild hamsters eat those and more. They are opportunists that will eat protein-rich animal remains and bugs. If it can comfortably fit into the hamster’s mouth, the hamster will try to eat it.

Read How To Get Rid of Hamster Mites?

While wild hamsters have a lot in common with domestic hamsters, that does not mean a pet would survive in the wild.

They would need to grow up in the natural world to know how to coordinate themselves with a complicated environment, and many places people live do not offer good conditions for a hamster.

Syrians are solitary, although you may notice that domestic Syrians tolerate companions while they are young. However, as adults, they are territorial and have a hotter temper than other species.

Unlike other hamsters, Campbell dwarfs don’t dig their burrows but move into abandoned ones other animals had dug.

European hamsters are more different from other hamster varieties. They live in agricultural and residential areas, particularly in gardens and hedges.

Because of their habitat preferences, they can be an annoyance to anyone trying to grow food.

Check How To Get Rid of a Hamster

Domestic hamsters have a small, safe world. They live in a cage in developed countries like the USA, Australia, and Britain with ample food, water, toys, and a consistent temperature.

Since you take care of your pet hamster and give them all they need, they have minimal experience with “survival skills.”

On the other hand, wild hamsters need to scour for their food and water. They need the fitness to do so and the knowledge of their habitat. They also have to create underground burrows and even find or build a community of other hamsters.

To a lesser degree, they may also have different diets.

Wild hamsters live in arid habitats on the Eurasian continent. European species range from Belgium to Russia and south to the Mediterranean. Many species live in the Middle East, Russia, China, and Central Asian countries.

So, if you ever wanted to imagine what life in the wild would be for a hamster, now you have a better idea. All hamsters forage at night, and most sleep in a sandy burrow during the daytime. Most hamsters live alone, but they usually live a short distance from other hamsters for safety and breeding purposes.