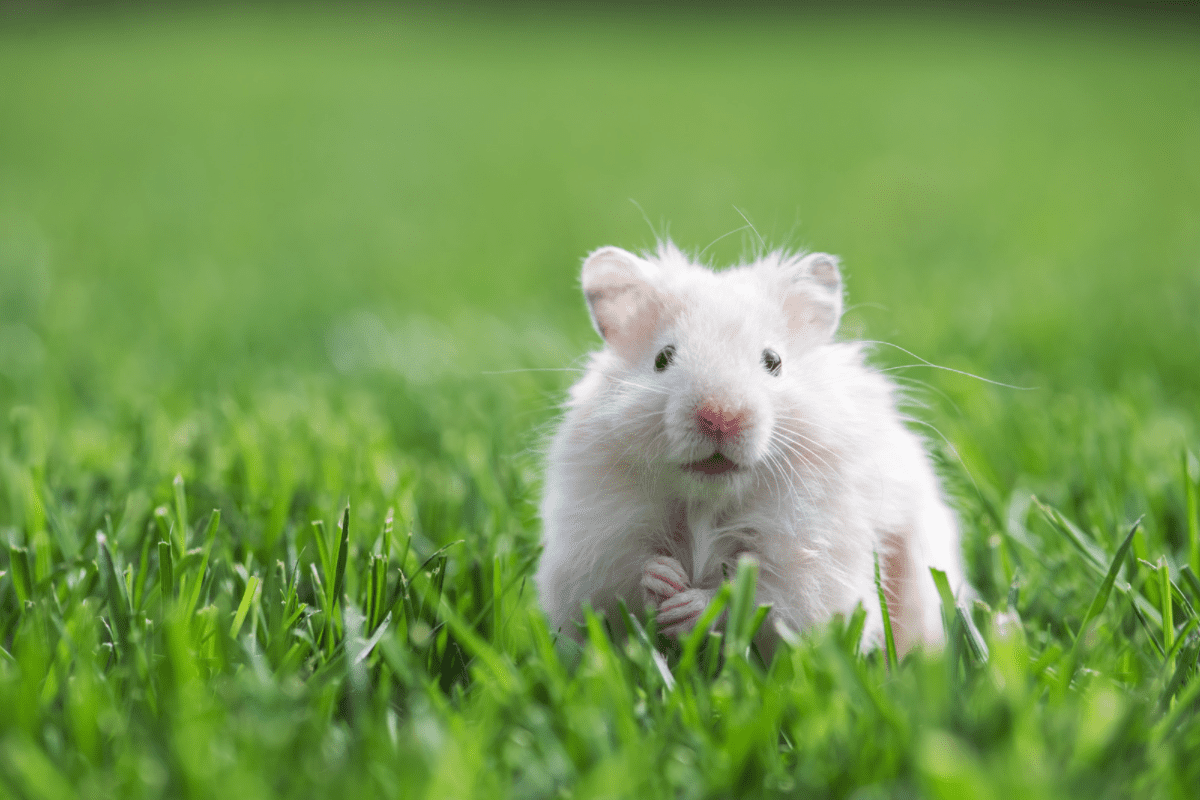 You may be thinking about getting a hamster but need to know what size they are. So, how big is your typical hamster?

Now, let’s look at each of these in a bit more detail.

The Syrian hamster, or golden hamster, is the most popular pet hamster in various cities in the United States like Las Vegas, Oakland, Minneapolis, California, etc. They are also the largest, growing up to 7 inches (177.8 mm). This makes them the easiest type of hamster to hold, making them great for kids.

Before Syrians reach adulthood, any markings they have will become clear, and the fur of some of them will turn dark. The male’s hind parts will become bigger, and the females will go into heat regularly, which is every four days. As adults, they are typically golden in color, which is why they are also called golden hamsters.

Syrian hamsters are fully grown at three months of age, but they can reproduce at around four weeks. Once Syrian hamsters reach maturity, they must be separated from all other hamsters and put into their own individual cages.

After maturity, their territorial instincts kick in, and they will fight any other hamster around them for territory. Syrian hamsters are incredibly solitary. If placed into a cage with another hamster, they may fight each other to death unless stopped.

Roborovski (Robo) hamsters are the smallest of all hamster species. As newborns, they only weigh around 1 gram (0.04 oz) – the weight of one paperclip! However, they grow extremely fast, given their short lifespan. They become covered in hair and grow whiskers in less than a week. At two to three months of age, they are fully grown.

Robo hamsters can be kept in pairs or small groups of the same gender into adulthood, unlike Syrians. However, they are harder to come by than Syrian hamsters, making them less common as pets.

While they are incredibly tiny, they have long legs for their small bodies, allowing them to be especially agile. They are known for being very quick, active, and hard to catch.

Roborovski are not recommended for small children or anyone who prefers a more cuddly, easy to hold hamster. However, their quickness and energy can endear them to an experienced owner who likes a tiny hamster with a lot of movement.

In captivity, the Roborovski lives around three to four years. In the wild, they rarely make it past two years of age.

Read Why Is My Hamster Biting the Cage

Chinese hamsters have a much longer tail than other hamster breeds. Their tails can grow up to an inch or 2-3 cm long. They also have a more slender or long figure. Because of these traits, combined with their brown fur, they are often said to resemble a mouse.

These hamsters have a dark brown or black stripe running down their back and a light belly. They also have especially large cheek pouches despite their minute size.

Adult Chinese hamsters are generally calm and docile. Endearingly, they sometimes cling to people’s fingers with all four legs. They can also be quite energetic and quick, making them hard to handle at times.

Chinese hamsters are territorial, and it’s a good idea to keep them separate from each other as adults. However, it may be okay to keep them with other hamsters of the same sex.

Chinese hamsters are fully grown at three months and live around two to three years in captivity.

Read How To Tell if a Hamster Is Pregnant

Like the Roborovski, Campbell hamsters are also quite small and hard to handle. They are energetic and very fast, making them difficult to hold and cuddle. Because of that, they’re not the best choice for small children. Their small size also makes them prone to injuries or being dropped.

Furthermore, they can be grumpy from time to time and will nip to show just how much they dislike something. Because of this, they are much better suited to experienced hamster owners rather than newbies.

Despite this, Campbell hamsters are more social with fellow hamsters than other breeds. They can be kept in small groups or pairs of the same gender, though their behavior should still be monitored. However, if they are introduced at a young age – younger than eight weeks- they can peacefully coexist with others.

These hamsters have a characteristic dark brown or black dorsal stripe on their back. When viewed from above, the Campbell hamster’s body looks like the shape of the number ‘8’.

Campbell hamsters are fully grown at three months. They live to about two and half to three years in captivity.

Winter white (or Siberian) hamsters are typically about half the size of Syrian hamsters. Unlike Syrians, however, they are very social. They can be kept with other same-sex hamsters, especially if introduced at a young age. However, it is still a bad idea to introduce them when they are older and likely to become territorial.

Physically, they have a rounder body shape than other hamster types. Their tail is very short and can almost appear not to be there when they’re hunched down or sitting.

A unique characteristic of the Syberian is their color-changing fur. Their fur is a greyish brown through most of the year, but during winter, their coat turns white to blend in with the snow. However, this may not occur when the hamster is kept inside as a pet.

They are a friendly breed to new hamster owners as they are tolerant of being handled and are easier to hold than smaller breeds. Since they are slower than Robo hamsters, they won’t cause undue difficulty while holding them. Still, they may be too small for children.

Read Why Do Hamsters Eat Their Babies

The table below lists recommended cage sizes for the five most common pet hamster breeds:

These recommendations are minimum requirements for hamster cages. Anything below these numbers will be too small for your hamster and should be upsized.

Hamsters need a decent-sized living space to be at their healthiest and happiest. Hamsters with adequate space to live and burrow in have been shown to be much healthier than those without it. They even live longer.

Those without decently sized cages have been found to experience stress and anxiety. Though hamsters are small, they need room to play, burrow and run.

The European hamster is native to an extensive range of Eurasia. In captivity, they live around eight years. However, they are not domesticated and cannot be kept as pets.

Hamsters are usually quite small, especially dwarf and Chinese breeds. But their smallness is often what endears them to their owners. If you’re looking for a tiny pet that is nonetheless full of personality, a hamster can be a great choice.