Hamsters can be fun little pets to have around, especially when they have babies! However, the unfortunate truth is that some hamsters will eat their babies. While this is shocking and sad to many people, it’s normal for hamsters—but why do they do it?

Hamsters eat their babies when they’re stressed or fearful. Like mothers of other species, hamster mothers are very protective of their young. In the case of hamsters, stress can cause mothers to eat their babies. Hamsters will also eat their dead babies to keep the nest clean.

The rest of this article will discuss what’s causing hamsters to eat their young or what’s preventing them from eating their babies. I’ll also discuss various tips on caring for hamster parents and new babies, so read on until the end.

However, other factors, including fear, lack of proper nutrition, death of the baby, and being territorial, are also the reasons.

Your Hamster Is Stressed Out

A female hamster feeling extremely stressed is a probable reason for it eating her babies. Humans can’t always control when their hamster is stressed, and you may not even know your hamster ate one of its babies if you didn’t count them.

A hamster’s stress can be due to many reasons, most of which have to do with its environment and nutrition. Its cage being too small, dirty, and lacking adequate food and water are all reasons for stress.

Too much of any stress could cause the hamster to eat its young, so it’s essential to keep your hamster as stress-free as possible.

Lack of adequate exercise can also cause hamsters stress. If you don’t already have one, I recommend getting a hamster wheel, such as the Niteangel Super-Silent Hamster Exercise Wheel from Amazon.com in the United States. This hamster wheel is quiet and comes in various colors. It will keep your hamster busy and, hopefully, stress-free.

Your Hamster Is Scared

Like stress, fear is a big reason why hamsters eat their young. Many species have the protective instinct to protect their young, and usually, this instinct translates into being aggressive toward others near their babies.

While hamsters still have these instincts, fear can make them react differently, such as eating their babies instead.

However, hamsters eating their babies due to fear isn’t the most common reason.

The Mother Hamster Is Hungry or Lacking Nutrients

Not providing your mother hamster with adequate food and water and the proper nutrients can result in many issues, including her eating her babies.

A study published in 2017 found that hamsters with nutritional deficiencies, specifically a vitamin B3 deficiency, caused abnormal maternal behaviors in hamsters. This study put hamsters on a maize-only diet, causing many dietary deficiencies.

Ensuring your mother hamster gets the proper nutrition and has plenty of food in their cage will hopefully deter her from eating her babies.

Another reason why hamsters eat their young is to clean up the cage. If a hamster’s baby dies and it’s still in the nest, the hamster will eat the baby to “clean the cage.” While this might seem a little brutal and very shocking, it’s a normal occurrence among hamsters.

In fact, if you have multiple hamsters in the cage and another mother hamster smells a baby that’s not hers, she’ll eat it. While hamsters typically won’t eat babies alive, it’s still possible.

Should I Remove a Dead Baby Hamster?

Even if the mother hamster is sleeping, you still need to be extra careful if you decide to remove the baby hamster from the cage. You don’t want to touch the hamster’s healthy babies accidentally.

By right, you shouldn’t touch the babies for several weeks—not until they’ve grown some fur. If your scent sticks on one of the babies, the mother hamster may kill it.

Your Hamster Is Feeling Territorial

Lastly, hamsters may eat their young because they’re feeling territorial. Such behavior is most common among father hamsters. In general, hamsters are very territorial animals.

While mother hamsters have the maternal instinct to take care of their young, hamsters won’t get attached to their children as humans do.

Therefore, she won’t protect her babies from other hamsters as much as you’d expect.

If one of your hamsters had babies, it’s important not to let any hamsters in the cage, especially not the father.

Not only can the father be territorial, which could mean the potential of him eating the babies, but the mother could become stressed with the father’s presence.

Check How Long Does a Hamster Live

How To Prevent Hamsters From Eating Their Babies

Pay attention to your hamster once it has given birth. You should take various actions immediately to protect the babies to the best of your ability, including removing other hamsters and providing adequate food.

However, there are also things you should know not to do, including touching the babies or mother.

It’s important to remove other hamsters from the cage when a pregnant hamster gives birth. Having other hamsters in or around the mother’s nest will cause territorial issues and added stress to the mother.

Therefore, giving the mother and her babies their own area is best for them. Moving the other hamsters to another hamster cage or blocking off the area is recommended.

Read What Hamster Lives the Longest?

Provide Enough Food for the Mother

Hamster mothers need lots of food and water to nourish their babies properly. Lack of nutrition can cause mothers to eat their babies. So, ensuring you feed your hamster quality food will be the best way to prevent your hamster from eating its babies.

I recommend feeding your hamster the Wild Harvest Nutrition Diet from Amazon.com. This hamster food is packed with ingredients essential to the health of hamsters. You won’t have to worry about your mother hamster having nutritional deficiencies that might lead her to eat her babies with this food. 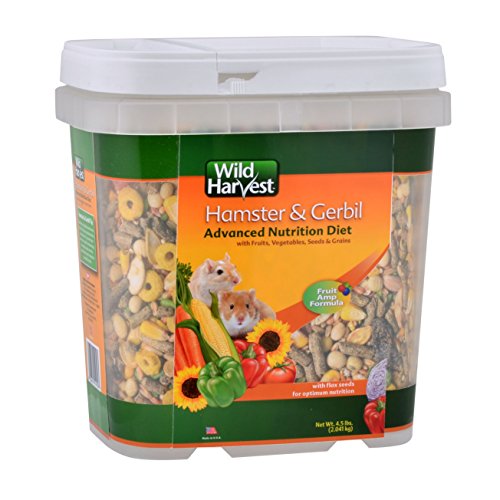 When a mother hamster gives birth, you should never touch the babies. While they’re tiny and adorable, touching the babies (whether it’s picking them up or petting them) can cause the mother a lot of stress and confusion due to your scent on the baby.

Your scent on the baby hamsters can cause the mother to reject them or confuse them as not hers, leading to her killing the babies.

As important as it is not to touch the babies, it’s also crucial that you leave the mother while she cares for the babies. It would help if you didn’t touch or mess with the mother for at least a couple of weeks after she’s given birth.

Touching the mother will transfer your scent onto her and cause her distress. Your scent can also confuse the babies. Therefore, it’s best to play with other hamsters while the mother hamster takes care of her babies.

Hamsters eat their babies for many reasons, but it mostly comes down to a hamster’s instincts. Typically, a hamster will only eat a baby hamster if it has already died in order to “clean” the cage. However, a hamster being fearful, stressed, or even confused can cause it to eat its babies.

So it’s essential to give the mother hamster ample food and space after giving birth, remember not to touch the babies, and remove other hamsters from the same cage to ensure the baby hamsters aren’t harmed.