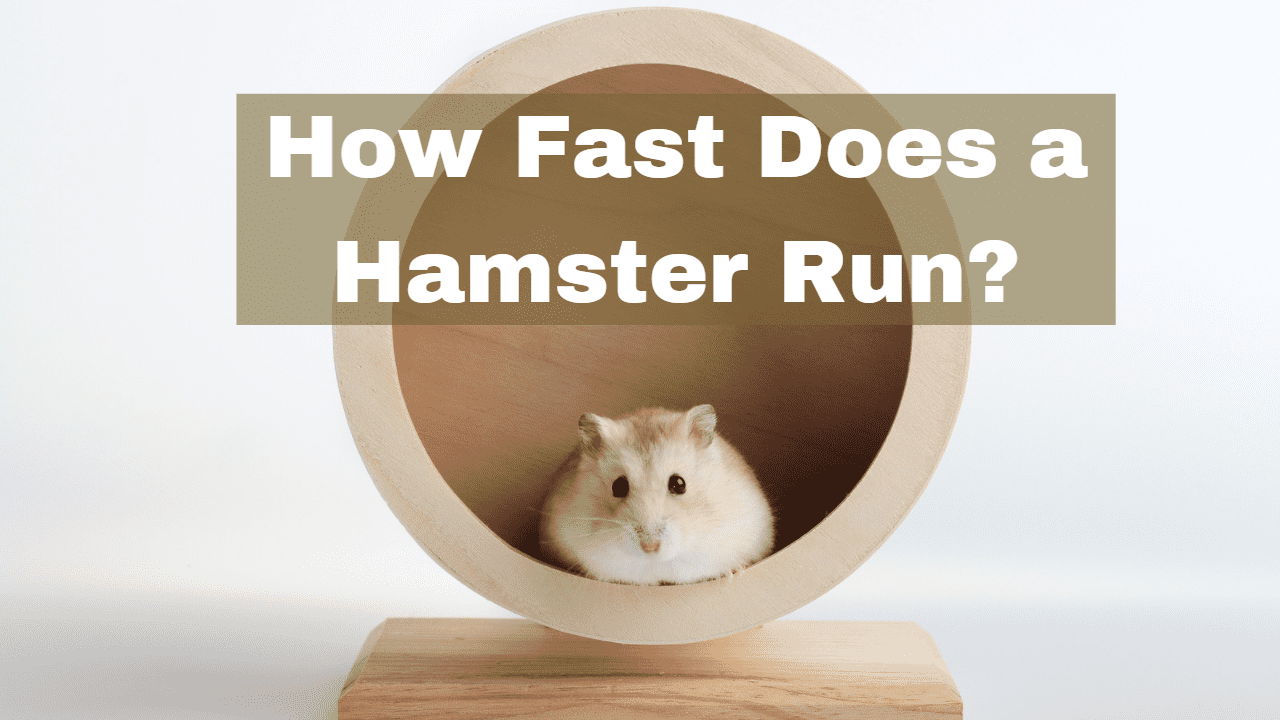 Hamsters are a common first-time pet for many children. They’re small, energetic pets who constantly run on their hamster wheels so quickly that you can barely see their paws moving.

So, let’s talk more about how fast and far hamsters can run, why hamsters run, and whether hamster balls or hamster wheels are better. I’ll also answer whether or not hamsters can become addicted to running and help you keep your pet hamster fit and healthy.

The Speed and Distance a Hamster Can Run

Hamsters are the most popular pet in many states on the east coast of the United States, from Delaware to New York to North Carolina. Depending on their breed, pet hamsters run between 3 and 6 miles per hour (4.8 to 9.7 kilometers per hour). They usually run up to 9 miles (14.5 kilometers) every night. That’s a lot more than most of us humans can say!

The most common pet hamster breeds are golden or Syrian hamsters and the three Dwarf breeds.

Syrian hamsters are faster due to their long limbs and ability to travel long distances. Dwarf hamsters are more agile, but they must take more breaks while running. They also have shorter legs, so they are slower than Syrians.

Hamsters are more crepuscular than nocturnal, which means they’re most active during twilight or sunset. Because of this, you’ll often find your hamsters sprinting on their hamster wheels in the evening into the night or right at sunset.

Read Why Is My Hamster Fur Sticking Up?

Why Do Hamsters Run?

Hamsters run because they’re naturally energetic and they’re prey animals. Hamsters have survived since they can run away from predators so quickly. Even out of captivity, hamsters are known to be active. They are constantly moving to avoid their predators by running, burrowing, and hiding.

Let’s go into more depth about why hamsters run.

As I’ve stated before, it isn’t unusual for pet hamsters to run around 9 miles (14.5 kilometers) overnight. They run such long distances due to their natural energetic dispositions and instincts.

If your hamsters don’t get enough exercise, they’re likely bored. This boredom may cause your hamster to become lethargic, irritable, and destructive. So, it’s critical to ensure that your pet gets plenty of toys and opportunities to run.

Beyond running, hamsters may also expend energy by scurrying around the bottom of their cage or by burrowing. However, hamster wheels or balls are the best way to ensure your hamster gets enough exercise from running.

Read Why Does My Hamster Lick Me

Hamsters Are Prey in the Wild

Hamsters are small rodents and therefore prey in the wild. Due to their status as prey, they need to be quick and agile to avoid cats, dogs, foxes, birds, or even snakes.

Hiding from predators is instinctual to all hamsters, so running is instinctual. They can run quickly, but they must often take breaks to listen for any possible danger. They use these breaks to identify ways to run if predators are nearby in the wild.

Pet hamsters still have a prey mentality, and when you reach into their cage to bring them out, they may consider you a predator and avoid your hands. So, it’s critical to provide your hamster with everything it needs to stay happy, entertained, well-exercised, and healthy if you want to develop a good relationship.

The most common way pet hamsters run is by running on hamster wheels or in hamster balls. Hamster wheels are generally located in their cages, ready to be used whenever your hamster wants.

Hamsters can only use a hamster ball when you put them in the ball yourself, and it allows your hamster to run around the house in a protective bubble. Since the ball encloses them, they won’t chew on electrical wires, get lost, or get snatched up by another pet like a cat or dog.

Read How To Humanely Kill a Hamster?

Hamster wheels and hamster balls are the most common ways owners exercise their hamsters. They each have pros and cons, so it’s essential to consider which one might be best for your pet and your lifestyle. Usually, it’s best to have both on hand.

Let’s go into more depth about what hamster wheels and hamster balls are.

Hamster wheels are generally attached to a hamster cage. A wheel rotates when a hamster runs inside it, acting similarly to a treadmill.

Most hamster wheels have runged or ridged edges on a stand with a single or pair of axles. They come in many materials, such as wood, metal, and plastic.

There are some things you must take into consideration when choosing a hamster wheel for your hamster:

Unfortunately, there aren’t many studies on the safety of hamster balls. To decide whether or not you want your hamster to exercise in a hamster ball, you need to consider how the ball will aid and detract from your hamster’s wellbeing.

Some benefits of using a hamster ball are:

Now, here are some things to take into account that can harm your hamster if you use a hamster ball:

Read How To Tell If Your Hamster Is Sick?

Can a Hamster Become Addicted to Running?

Hamsters are naturally very active, and it can be scary if your hamster runs on its wheel and it seems like they never stop. If this happens, you may worry that your hamster is addicted to running. However, is that possible?

A hamster can become addicted to running. For the most part, hamsters know their bodies and know when they need to stop running. However, you should be concerned if your hamster constantly runs without eating or drinking as much as it should.

While hamsters are naturally active and need plenty of exercise, they may still develop a running addiction. Most often, when your hamster becomes addicted, they’re addicted to running on the hamster wheel inside its cage.

Here are some reasons why hamsters become addicted to running:

Read What Foods Can Kill a Hamster?

How an Addiction to Running Affects Hamsters

It’s scary when you realize that your hamster is addicted to running. There are a plethora of side effects that accompany the addiction, including:

Read How To Clean Hamster Poop

How To Prevent Your Hamster From Becoming Addicted to Running

I’ve established that hamsters can become addicted to running and that some fatal side effects occur if a hamster becomes addicted. However, what can you do to prevent your hamster from becoming addicted?

There are various tactics you can implement to prevent your hamsters from becoming addicted to running, including:

Can Hamsters Run Themselves to Death?

Hamsters can run themselves to death, but it’s improbable. Most hamsters know when they’re tired and need to stop running. The only time you ever need to be worried is if your hamster isn’t eating or drinking enough and is malnourished and dehydrated.

If you’re worried about your hamster dying from too much exercise, I suggest taking the hamster wheel out of its cage for most of the day. Only have it in during times you’ve decided they’ll exercise. Also, ensure that your hamster is eating and drinking as it should be.

A popular first-time pet, hamsters are active rodents often found running on their hamster wheels. Despite their small size, they can run up to 3-6 miles (4.8-9.7 kilometers) per hour and 9 miles (14.5 kilometers) in one night.

Hamsters most often run in a hamster wheel, like a treadmill in a wheel shape, or a hamster ball, which is a ball that you put your hamster inside.

Be careful of how much your hamster runs and its health because your hamster can run too often and become addicted.