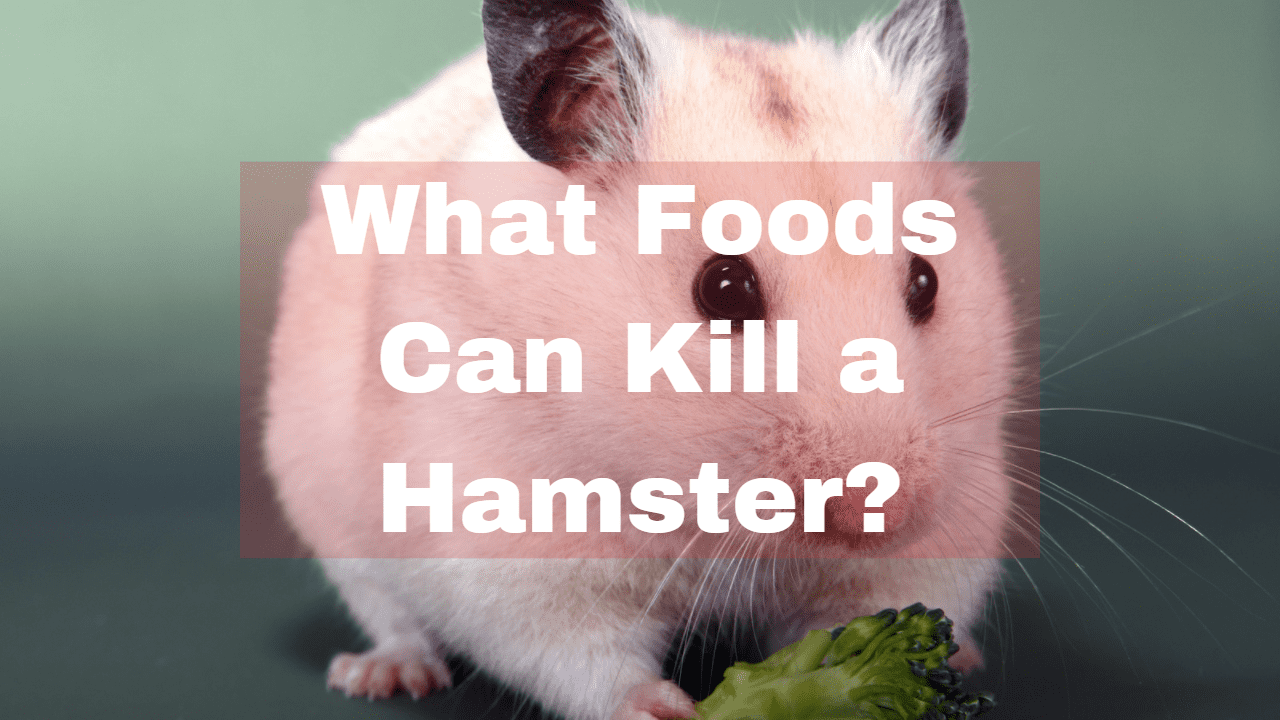 With their sweet and docile personalities, hamsters make fantastic pets. If you have just acquired a hamster, you’re probably wondering if there’s anything they can’t eat. More importantly, what foods can kill a hamster?

Many foods like celery, onions, and dairy can kill a hamster. Unripe, unwashed, and moldy produce can also be dangerous for hamster consumption. Finally, various beans and foods rich in oxalic acid are often fatal for hamsters.

In this article, I’ll discuss the specific foods that can kill a hamster and explain why they may be dangerous for your hamster to eat.

Foods That Are Fatal for Hamsters

Hamsters are omnivores and eat a wide range of foods. However, there are certain foods that they should never eat, as these could be fatal for them.

These foods are fatal for hamsters:

I’ll discuss in more detail below why these foods can be fatal for hamsters.

Hamsters love snacking on healthy vegetables, but you should avoid feeding them celery. Celery is nutritious for hamsters, but its stringy consistency can make it a serious choking hazard.

If your hamster loves eating celery, you could overcome the choking hazard by chopping the celery up into tiny pieces.

Unfortunately, onions are incredibly nutritious but can kill your hamster if they eat them in large enough quantities.

Onions contain thiosulfate, a compound that can cause hemolytic anemia in hamsters. This fatal condition causes hamsters to lose their red blood cells and can quickly become life-threatening.

Red blood cells transport oxygen and iron throughout the body. Without them, your hamster’s tissues can break down and release toxins.

Onions can also give hamsters diarrhea, which can kill a hamster depending on its severity.

You should avoid giving your hamster onions and any other vegetable in the onion family, including the following:

Most hamsters love eating chocolate and can’t resist its rich sweetness. However, when in large quantities, it can be fatal.

Chocolate contains theobromine, an alkaline chemical that hamsters metabolize extremely slowly. Eating even a moderate amount of chocolate can make the hamster’s blood too alkaline, which can cause organ failure.

Caffeine is another dangerous chemical to hamsters, and the caffeine in chocolate and coffee beans can make your hamster’s heartbeat too quickly.

A paper released by the National Library of Medicine describes how caffeine can raise a Syrian hamster’s cholesterol levels. If you have a Syrian hamster, this is another reason to avoid feeding him chocolate and coffee beans.

Giving your hamster small quantities of fresh fruit and vegetables as a snack is typically acceptable and nutritious. However, you should scrutinize the produce before feeding it to your hamster.

Unripe fruit and vegetables can cause severe diarrhea in hamsters. In turn, the hamster can quickly become dehydrated, lose electrolytes in its cells, and, in extreme cases, die. If you notice that your hamster has diarrhea, it’s essential to take it to the vet as soon as possible.

Unwashed fruit and vegetables may contain traces of pesticides, including permethrin, organo-phosphates, and lead. These chemicals can fatally poison a hamster, depending on how much they consume.

Avocados Are Toxic to Hamsters

Avocados are incredibly nutritious, but they contain persin, a dangerous toxin for hamsters. This poison can also be found in avocado skins.

If ingested, person can affect your hamster in the following ways:

In extreme cases, persin poisoning can be fatal. It’s vital to take your hamster to the vet as soon as possible if they’ve eaten avocado.

Read What Hamster Lives the Longest?

Apples provide many health benefits for hamsters, but apple seeds can be fatal to them.

According to a study published by North Dakota State University, apple seeds contain cyanide. With this in mind, animals rapidly metabolize cyanide. Since hamsters are so tiny, it doesn’t take long for signs of poisoning to emerge.

Signs of cyanide poisoning in hamsters include:

When feeding your hamster apples, always chop the apples up into tiny pieces and check carefully for seeds.

Bitter Almonds Are a Source of Cyanide

It’s not dangerous to feed your hamster small quantities of almonds occasionally, but you need to be careful as packaged almonds often contain a tiny amount of bitter almonds, which can be lethal for hamsters.

Bitter almonds contain a cyanide compound, and your hamster would only need to eat a few to become life-threateningly ill.

The US Department of Agriculture allows packaged almonds to contain up to one percent of bitter almonds, so it’s safer to avoid giving your hamster almonds altogether.

Cooked beans are healthy for hamsters. However, the Providence Animal Hospital in Charlotte, North Carolina states that you should never feed hamsters uncooked beans.

Uncooked beans (kidney or black beans) contain lectin, a glycoprotein compound, which is toxic and sometimes fatal to hamsters. They also contain phytohaemagglutinin, a toxin that can give hamsters intestinal problems and cause severe diarrhea.

When eaten, oxalic acid binds to minerals in the intestine or kidneys to create new compounds such as iron oxalate and calcium oxalate. These compounds can cause kidney failure in hamsters, which is often fatal.

It’s OK to feed your hamster tomatoes, but you must ensure that you remove any vines, leaves, or stems from the fruit beforehand.

Tomato vines, leaves, and stems are toxic to hamsters because they contain solanine, an alkaloid chemical.

A study conducted by ACS Publications in Washington, DC, revealed that acute solanine toxicity in hamsters (especially the Syrian hamster) can be fatal. Solanine poisoning can cause the following symptoms in hamsters:

Seeds Are a Choking Hazard for Hamsters

Most hamsters love nibbling on a handful of seeds. Although no component of seeds is toxic to hamsters, they can be a choking hazard to them.

If your hamster doesn’t chew the seed thoroughly, it can easily get lodged in the throat and prevent your pet from breathing.

A solution could be to chop up your hamster’s seeds finely, but seeds have high-fat content and can make your hamster gain weight, so it’s best to avoid them in general.

Read Why Is My Hamster Bleeding From Its Bottom?

Some Plants and Leaves Are Toxic to Hamsters

As omnivores, hamsters like chewing on plants and leaves. If you enjoy giving your hamster a few plants or leaves occasionally as a snack, you should be aware that some can be toxic to hamsters. The following plants are fatally toxic to hamsters:

These plants contain toxins that can poison your hamster and potentially kill him. The following plants, however, are safe for hamster consumption:

Dairy Products Are Indigestible for Hamsters

Hamsters are lactose intolerant and shouldn’t eat anything containing dairy, such as cheese or milk.

If a hamster eats dairy products, he can become ill quickly and vomit or develop diarrhea. Since the reaction can be quite severe, your hamster could become dehydrated rapidly. Dehydration is often fatal in such tiny animals.

Read How To Train Your Hamster To Cuddle

Non-Toxic Foods That Should Be Avoided for Hamsters

Now that I’ve explained which foods can be fatal for hamsters, you might wonder if there are foods that aren’t toxic but that you should avoid feeding them. So, are there other foods that hamsters shouldn’t eat?

According to VCA Animal Hospitals in Los Angeles, California, hamsters are prone to weight gain, which can cause a wide range of health problems, including mobility issues, diabetes, and heart disease.

Some hamster owners enjoy giving their pets tiny morsels of junk food or fatty meat they’re eating. Hamsters are tiny animals, so they can only handle small amounts of fatty foods each day.

Overweight and obese hamsters can develop multiple health problems. However, fatty foods on their own can also cause intestinal problems, cramping, and diarrhea in hamsters.

According to Carolina Veterinary Specialists in Huntersville, North Carolina you should never feed your hamster candy, chocolate, or sugar-rich foods. These foods can cause a rapid spike in blood sugar levels.

In addition to palpitations and diabetes, regular consumption of processed sugars can cause tooth decay and malnutrition in hamsters.

Food for Other Pets or Animals Lack Vital Nutrients

It’s dangerous to assume that food for other animals or pets is suitable for hamsters. These foods cater to an animal’s specific nutritional needs and may not provide your hamster with the essential minerals and vitamins it needs.

Cat food, for example, is high in taurine, a vital nutrient for cats. However, if your hamster eats cat food, he may vomit or develop diarrhea because hamsters are sensitive to taurine.

Many hamster-specific foods are widely available at pet stores, grocery stores, or online. If you aren’t sure about the quality of the food you’re feeding your hamster, ask your vet for a recommendation.

Too Many Vegetables and Fruit Contain Excess Fiber

Feeding your hamster fresh vegetables and fruit is a good idea, given that they contain plenty of nutrients. However, you should only feed your hamster a small amount of fresh produce every day because the high fiber content can cause diarrhea.

Feeding your hamster pale green lettuce varieties is not harmful, as long as you don’t feed it too much.

If you want to feed your hamster lettuce, consider feeding him dark green lettuce, such as:

You might think that your hamster loves certain spicy, seasoned or salty foods. However, it’s not advisable to feed these foods to hamsters.

Even a tiny quantity of salty food can dehydrate your hamster, while spicy or heavily-seasoned foods can cause intestinal upset.

Citrus fruit is not toxic to hamsters. In fact, if you give citrus fruit to a hamster, they will likely enjoy eating it.

Unfortunately, citrus fruit is too acidic for hamsters and can cause the following problems:

A 1960 study by the International Review of Neurobiology revealed that hamsters could tolerate alcohol much better than a lab rat. When hamsters consume alcohol, it bypasses the liver and travels directly into the bloodstream.

Even though hamsters have a high tolerance to alcohol, you should never feed it to them because it contains no essential nutrients. Additionally, long-term alcohol consumption in hamsters can cause organ damage.

Hamsters enjoy eating a varied diet, but you should avoid giving them certain foods as they can be fatal to them. Be aware of your hamster’s nutritional needs, and ensure that you are providing your pet with a healthy diet.

It’s best to give your hamster vet-recommended food, plenty of fresh water, and the occasional healthy snack.