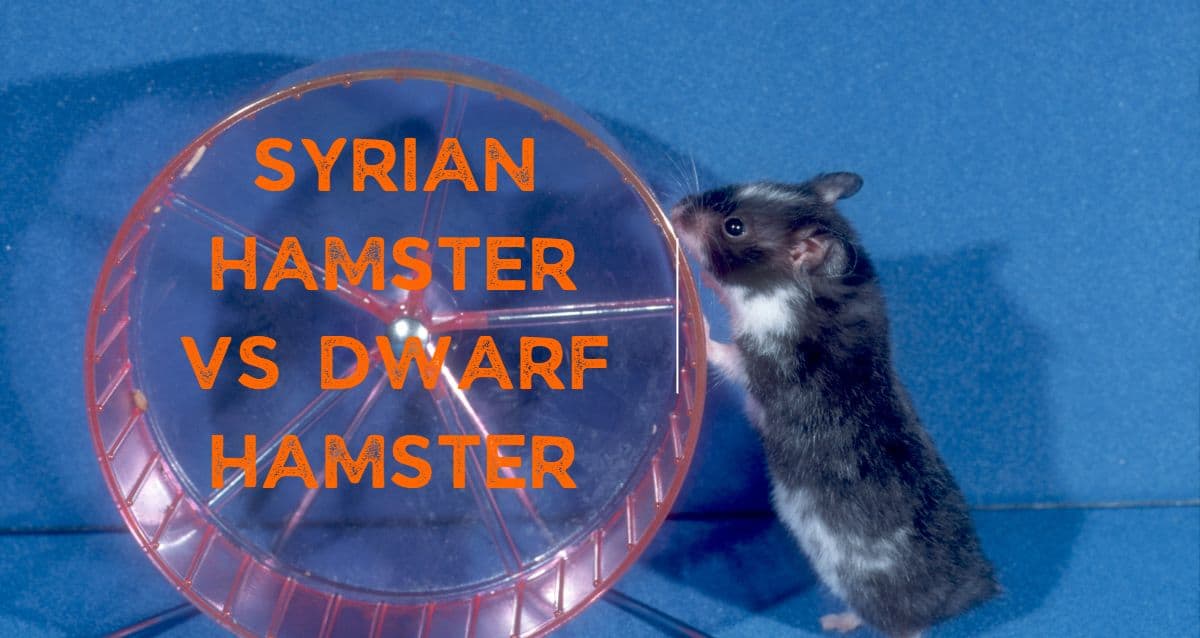 The reason hamsters are such a popular choice among pet owners is that they are cute, independent, pleasant to hold, and don’t require much attention.

They keep themselves busy exercising on their running wheel and are a cuddly friend to children.

Syrian and Dwarf hamsters are the two common species kept as pets. The Syrian hamster’s original home in Syria, while the Dwarf hamster originates from countries including China, Siberia, and Mongolia.

The country of origin is not the only difference between the two species. Syrian hamster vs. Dwarf hamster is a long debate, and we’ll get straight into it.

If you’re trying to choose between a Syrian and a Dwarf hamster for your home in the USA, you need to understand that both these species have different behaviors, temperaments, physical attributes, and care requirements.

You must know exactly what you want before walking into a pet store. Let’s start by discussing Syrian hamsters in detail.

When someone thinks of hamsters, they usually mean the Syrian hamster. This variety of hamsters is also called golden or Teddy Bear hamsters due to their fluffy look, golden-brown fur, and white belly.

These are easy to train and low-maintenance. They are also bigger in size and have a sweet personalities. They thrive on their owner’s attention and love and usually reciprocate it, making them fun animals to be around.

They’re naturally curious and enjoy interacting with people, and their lively nature makes them easy to handle.

A Syrian hamster usually lives for 2 to 3 years.

These hamsters can grow as long as 8 inches in length. Their large size often tricks people into thinking that Syrian hamsters are not as fast as the other species, but that’s far from true. They can move very fast.

The large size of Syrian hamsters automatically translates into heavier weight. They can weigh anywhere between 5 to 7 ounces.

The big and heavy Syrian hamsters can inflict big, deep, and painful bites but only do so when scared and threatened. They’re usually very calm and thus easily tamable.

It is better to train the good-natured and peaceful Syrian hamsters as soon as you get them.

Their ears and jaw bones are often dark brown. They have small bead-like eyes, stubby tails, and spacious cheek pouches to hoard food.

Syrian Hamsters are a highly territorial species. They should always be kept alone. Even though they like bonding with their owner, they don’t share the same custody towards their own family.

Small aquariums and cages are another reason for hamster distress. To make your hamster truly happy with its housing arrangement, you must provide a bigger enclosure, preferably between 1,500 x 2 inches and 2000 x 2 inches.

Additionally, you have to fill the larger enclosure with more equipment to keep your hamster busy, active, and happy.

However, this equipment is expensive, and not every hamster owner in the USA can afford it.

If a Syrian hamster is unhappy with its enclosure, it will relentlessly attempt to escape by clawing, chewing, and scratching the walls.

This experience can be equally stressful for the human and the hamster. A stressful hamster stops interacting with the environment and spends every moment looking for escape routes.

The ideal room temperature for a Syrian hamster is between 69 – 72° Fahrenheit.

Even though Syrian hamsters are naturally nocturnal and usually sleep through the day, they can be trained according to their owner’s schedule and adopt new sleeping habits.

These active and curious animals continuously roam about their cage while awake. To feed their curiosity, they require ample exercise throughout the day.

Your Syrian hamster does not need to stay outside its habitat, but spending some time outside will surely allow it to ‘stretch its muscles. Provide plenty of toys and textures to help them stay in shape.

Syrian hamsters enjoy problem-free health during their short life span. But in case of any digestive issues, they should be taken to a vet for a quick recovery.

As long as they get to live in solitary confinement, they will continue to lead happy lives. Housing with any other animal can lead to fatal results.

Be sure to add plenty of hiding spots, entertainment, and exercise options in their cage to promote a healthy lifestyle.

A Syrian hamster’s pregnancy lasts for 16 to 18 days. At the end of delivery time, pregnant hamsters become agitated and restless.

A healthy pregnancy can result in the birth of 5 to 15 babies. Hamster babies are known as pups.

A Syrian hamster enjoys a hamster pallet, fresh fruits and vegetables, herbs, nuts, and occasional mealworms. They only consume about 1 to 2 tablespoons of food and 6 tablespoons of water within 24 hours.

As suggested by the name, Dwarf hamsters are tiny, and even the longest type of Dwarf will grow up to 4 inches in length.

Their faster speed and agility also make them different from the Syrian hamsters. You can adopt four kinds of Dwarf hamsters and keep them as pets in the USA:

The average lifespan of a Dwarf hamster is between 2 to 4 years.

The Campbell, Winter White, and Roborovski Dwarfs cannot grow beyond 2 inches, while the Chinese dwarf can grow as long as 4 inches.

Weight differs between all types of dwarf hamsters, with the average weight being 1 to 2 ounces.

Out of all dwarf hamsters, the Campbell Dwarf is the most active and outgoing. It prefers to play with its hamster ball or run on its wheel for long hours.

Its super agility and constant need to run makes it a problematic pet choice for young kids who might want to hold and pet it with their little hands.

Dwarves are more social and can live in sharing with other dwarves of the same species. Householding them separately is still preferable, but housing two together will not end in a definite blood bath as with the Syrian hamsters.

If you plan on keeping two dwarves together in a cage, start by keeping the pups together. It makes it easier for them to create a bond and share a living space.

If you already have two dwarves living together, do not introduce a new one in the same cage.

The Chinese dwarves are similar to Syrian dwarves in that they value their privacy and do not like sharing their space with other hamsters.

Winter White dwarf hamsters are a sweet species and easy to handle and tame. If they bite (after being startled or scared), their bite won’t be as severe as the Syrian’s.

Campbells and Winter White dwarfs are gray-brown with white inner ears and bellies. Another distinct feature is that they have a lone stripe across their spine.

The Campbell Hamsters have furry feet.

Roborovski hamsters have a white face, white eyebrows, and white internal ears. They don’t have a dorsal stripe on their backs, and most have the same face and body color.

Like their Syrian counterparts, dwarves are also nocturnal animals, yet their sleep schedules can be changed according to their owners’ discretion with careful training. If left as they are, dwarves become most active after 6 PM.

Syrian hamsters have a better attitude towards training than dwarves. Dwarves prefer living on their own and providing entertainment from the safety of their cages.

Their small size and fast speed make it hard to hold and train them, yet people manage to tame them with a lot of care, time, and patience.

Roborvski and Chinese hamsters prefer to be left to their own devices while in the cage, and people who don’t want to hold or touch their hamsters prefer getting these species.

The Campbells dwarf hamster demands a more spacious housing than Winter White and tends to wreak havoc if forced to live in enclosures smaller than 1000 x 2 inches.

Winter White dwarves can live in much smaller cages and are a preferred choice of pets for people or kids who are just beginning to adopt a hamster.

The dwarves require almost the same housing ‘facilities’ as the Syrians. Be ready to equip the cages with plenty of exercise materials and toys.

The ideal room temperature for dwarves is between 20 to 22 degrees Celsius.

The gestation time of Campbell, Chinese, and Russian dwarf hamsters is around 18 to 21 days, while a Roborovski stays pregnant for 30 days.

Campbell dwarf hamsters can consume a tablespoon of hamster food and 6 tablespoons of water daily. Even though they are smaller than the Syrian hamsters, their higher metabolism rate and active lifestyle require almost the same food consumption as Syrians.

The table below can present the significant differences between Syrian hamsters and Dwarf hamsters:

The kind of hamster you choose to keep as a pet depends on your preferences and how much effort you’re willing to put into training it. Regardless of your choice, you’ll have a good time.