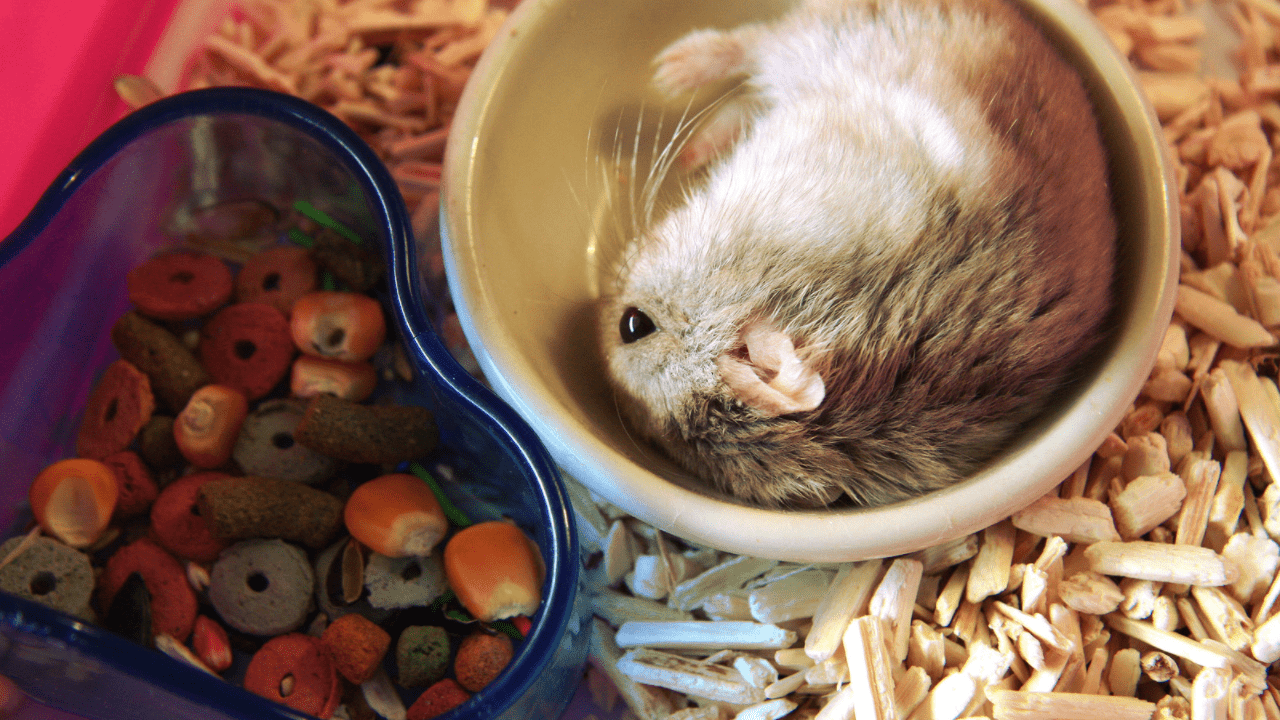 Hamsters lie flat when feeling hot. Lying flat lets them cool off from too much heat and prevents dehydration. Lying flat could also mean that hamsters played and exercised too much in their cages, leaving them hot and quite exhausted.

Cooling and exhaustion aren’t the only reasons why hamsters lie flat. Here’s a detailed explanation of why these cute little pets lie flat. 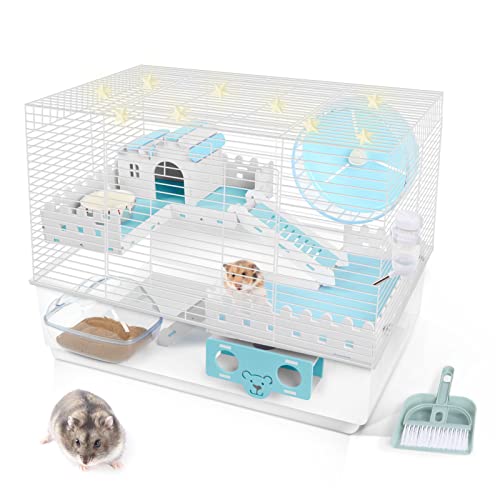 Other Reasons a Hamster Lies Flat

As discussed above, the main reason a hamster lies flat is to cool off when they get overheated. Hamsters often run and exercise at night, leaving them exhausted because of accumulated excess heat. To get rid of excess heat, you’ll find your hamster lying flat, as if sick.

Hamsters are nocturnal animals, meaning that they sleep during the day but remain active at night. Naturally, they will be tired and lying flat on the floor to rest during the day.

In addition to feeling too hot, a hamster may also be lying flat on the floor of its cage due to the following reasons:

Here are these reasons discussed in detail:

A Hamster Lying Flat Because of Heat

Although there are other reasons why a hamster may be lying flat on the floor, the main one is to cool off.

Unlike most humans who work during the day and rest at night, these pets do the opposite. That is why they’re always exhausted during the day.

Lying flat is their only means of cooling off and getting rid of the excess heat accumulated while exercising at night.

Not even an air conditioner or a cold bath can cool a hamster’s excess heat. It’s better not to interrupt them when seen in the flat-lying position. Once they’re cool enough, they’ll get up.

However, there are ways to help them cool off faster since lying flat on a bare floor may take time. Consider doing the following to help your little furry friend get rid of too much heat quickly, especially if you live in hot regions like Florida.

Hamsters don’t usually need a bath to stay clean. So, don’t be tempted to give them one even when you feel it will help bring down the heat.

Generally, these cute creatures are fastidious groomers, meaning they know how to clean themselves without needing a water bath.

Besides cooling off, a hamster can also lie flat in its cage to sleep.

This style could only be a habit that the hamster finds very comfortable. It goes down to personal preference, so allow these lovely creatures to do what they love.

After a long day working, a person usually needs a place quiet and comfortable enough to rest. The same applies to hamsters who find it comfortable lying flat on the floor.

In the beginning, one may get concerned that perhaps something is wrong. You get used to it and even enjoy watching your friend resting as time goes by.

The Hamster Could Be Hiding From a Predator

After ruling out sleeping and cooling off, look around to see if there’s something that could be scaring the hamster.

When they feel scared, hamsters lie flat anywhere in the cage or at a specific corner to hide from a predator.

It could be that a predator is around, and the hamster wants to protect itself. The predator assumes the hamster is dead if it sees it lying flat on the floor.

Hamsters don’t have to spot predators to be scared. They’ve exceptional noses and will detect any animal in your home.

Hamsters will choose to hide if they deem another animal’s scent to be that of a predator.

Maybe you’ve just brought the hamster home from the adoption center. It could be that the hamster is scared of its new environment and must first assess the surroundings carefully.

Occasionally, you’ll see it standing on its back, looking around, and then going back to the flat-lying position. But soon, after it gets used to its new home, it will outgrow that position and start to roam freely in its cage.

A Hamster Lying Flat Due to Dehydration

A hamster lying flat could also mean something more serious. It could be that the hamster is ill or dehydrated.

When dehydrated, hamsters become so weak that they cannot move, so lying flat becomes their only option. They need consistent and reliable access to water to avoid dehydration.

Putting a water bottle and daily refilling it will surely help them remain hydrated.

Understanding how much dehydration may affect the health and even kill the hamster will help you know the importance of giving water to these pets.

A hamster may not survive a day without drinking water, which shows how vulnerable they are to dehydration.

If you own one, ensure there‘s a constant water supply in its cage, and it should be easily accessible.

One of the signs to show that a hamster is dehydrated is seeing them lying flat, mainly when they can’t cool off.

Other dehydration symptoms include:

If these symptoms don’t fade away after giving water, it could be a much more serious illness, or the hamster got too dehydrated. Take the hamster to a vet for further diagnosis and treatment before it’s too late.

How Do You Rehydrate a Hamster Lying Flat?

The best way to rehydrate a hamster lying flat is to give it drinking water. Even though they don’t take too much water, it’s always a good idea to ensure their bottles don’t run empty. Also, don’t place a hamster’s cage directly in the sunlight.

The first thing to do when you suspect your hamster is dehydrated is to offer water. Let the hamster drink as much as it can.

Also, placing a hamster’s cage in direct sunlight could cause much discomfort and heat, especially during summertime.

The summer season in the United States brings too much heat that even humans find unbearable.

With such heat, when the hamster’s cage is placed directly in the sunlight, they can quickly get dehydrated. It’s advisable to place the cage somewhere cool, away from the sun, to rehydrate a hamster.

Consider taking your hamster to a qualified vet for treatment if these don’t work. The vet may administer fluids and other medications to nurse your hamster back to health.

Why Do Hamsters Lie on Their Wheels?

Hamsters lie flat on their wheels to sleep. This behavior is quite common in younger hamsters after exhausting themselves too much at night when it’s warm. They find the wheel comfortable and suitable for a good night’s sleep.

These little pets don’t only lie flat on the floor of their cage. Some of them love lying flat on their wheels.

One may wonder why their hamster is so addicted to the wheels when there are other comfortable spots in the cage where they can sleep. This section explains some of the reasons.

Although hamsters would rather sleep on an enclosed surface, they would be happier in a giant cage.

In their natural habitat, hamsters dig burrows where they spend most of their time. In these tunnels, they make different sections, some for sleeping and others to store food.

These holes are usually too big to allow them to run around freely, and when they get tired and need to rest, they go to the sleeping section. The holes also protect them from the extreme heat and keep them away from predators.

That’s why hamsters live happily in larger cages, like in dedicated boxes where they can make sections like those in the burrows.

If they can’t get to such a place, they find it comfortable lying flat on their wheels sleeping.

Besides sleeping on its wheel, the hamster will also store food and keep its bedding on the same wheel. So, ensure it gets cleaned regularly.

It’s not always about sleeping. Hamsters sometimes lie on their wheels to cool off from the extreme heat. Mostly, it happens when you live in scorching environments in the US like Arizona or parts of Nevada.

Dwarf hamsters may prefer lying on their wheels when they can’t reach their hideouts in the cage.

Lastly, check on the hamster’s health to rule out any sickness. If it’s a newly found behavior, you should be more concerned. If your hamster never liked lying flat on the wheel before and is now suddenly doing so, it could be sick.

Why Does a Hamster Lie in a Corner of Its Cage?

There are three possibilities as to why a hamster could be lying flat in the corner of its cage. First, it could be that the hamster is scared or feels uncomfortable in its cage. The second is that the corner is its favorite hiding spot. Lastly, this little pet could be sick.

Some hamsters are addicted to lying flat at a specific corner of their cage. Doing this is not always normal because hamsters are very energetic and active.

The best thing is to find out why your hamster lies in the corner of its cage.

Inspect their cages and determine if there’s something they’re getting away from. It could be that other parts of the enclosure are dirty.

Naturally, hamsters don’t like dirt, so they get away from it. To make it comfortable for them, ensure that their cage is cleaned and the water bottle refilled even when they didn’t drink up the previous day.

You may have adopted a naturally fearful hamster that any slight movement or loud noise will cause it to hide in the corner of its cage. With this type, the only thing it requires is enough time to adjust to the environment. Soon the fear will fade away, and your hamster will become very comfortable.

Could it also be that the hamster is sick? Illness takes the energy away from a hamster, leaving it weak and inactive. Hamsters would rather be lying in a particular corner than suffer more roaming around in the cage.

If you suspect that the hamster could be sick and that’s why it’s lying flat in a corner, take them to a vet for further checkup.

Why Is My Hamster Lying Cold on the Floor But Still Breathing?

Your hamster could be lying cold but still breathing because it has gone into a hibernation state or become so sick and weak that it may die soon. Lying flat on the floor, cold and not moving, is one of the signs that the hamster is soon dying.

A hibernating hamster will come around on its own after some time. Going into hibernation is very normal for most rodents.

But you should get worried if the hamster is taking too long to wake up. You can try reversing the situation by transferring the hamster to a much warmer room. It may take a while, but the hamster will undoubtedly wake up.

A hamster lying flat is normal. Hamsters assume this position when cooling off after a whole night of exercising or when sleeping. However, prolonged lying flat can sometimes indicate something is wrong and should be checked.