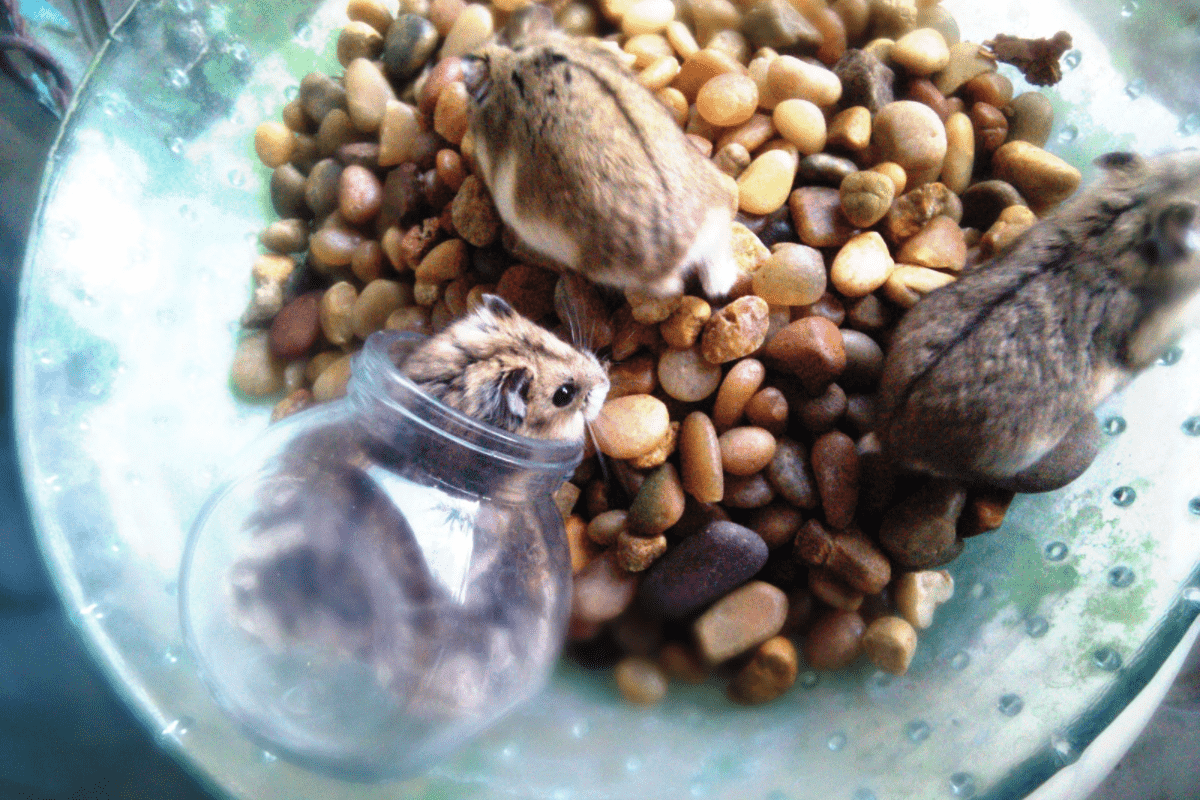 A hamster that isn’t eating can be worrisome; hamsters can’t speak, so they can’t tell their owners what the problem is. The owner is left in the dark, trying to figure out if the hamster is sick or if it’s just stashing the food somewhere. For new hamster owners, the situation can be frightening and frustrating.

Luckily, it isn’t usually all that difficult to figure out which one of these things is going on with your hamster. Read on to discover which situation applies to your hamster and how to save them if necessary.

Your Hamster Could Be Storing Its Food

The first thing you’ll want to do is check all your hamster’s nests. Hamsters in captivity tend to hoard food in their cheek pouches and then store it in one of their nests, away from the central nest where they sleep.

So to check for food caches, you’re going to want to search through their enclosure for every nest.

Because hamsters are nocturnal, you’ll want to avoid searching the nest that the hamster is sleeping inside. Hamsters are grumpy creatures and don’t like being disturbed during the day.

Instead, wait until the evening or some time around dusk when the hamster has woken up, is active, and isn’t in the nest. Check the nest, then.

Also, don’t take any food you may find from any of the food caches. The reason for this is that it’ll stress out the hamster. Hamsters like knowing they have a safe place to hide their food.

Even though they’re in captivity, hamsters still have a biological drive to hide their food away from “predators.” Knowing that they have no safe place to do this can cause them stress. You don’t want a stressed hamster.

You want a happy, active, energetic hamster! So leave the food where you found it and allow your hamster to believe they can safely hide their food.

That said, if you have to clean the area, you’re going to want to remove the food but be sure to replace it with fresh food.

Again, hamsters get stressed very quickly, and you don’t want that to happen! A stressed hamster is likely to stop eating, which is what we’re trying to avoid in the first place.

If you’ve found food caches in your hamster’s nests, then you have your answer: your hamster is eating! It’s just storing food for later consumption, as most hamsters tend to do. If you haven’t found any food caches, read on.

Your Hamster Could Be Too Stressed to Eat

As they say in California, “Maybe your hamster just needs to chill, dude.” As mentioned before, hamsters get stressed very, very quickly, leading to a loss of appetite. Several things can stress a hamster out and lead them to stop eating.

Loss of appetite due solely to stress isn’t too severe and will only last a few days, but here are some stressors to consider:

Read Why Is My Hamster Drinking So Much Water?

If you’ve gone down the checklist and checked off a few stressors, and if there are no food caches in the hamster’s cage, then your hamster is probably stressed out and, as a result, isn’t eating. Thankfully, there are a few things you can do to change that!

If your hamster isn’t eating due to stress, one of the easiest ways to get it eating again is to bribe it with treats! Hamsters love sunflower seeds and yogurt.

Or you can feed them Wild Harvest products. This Utah-based company produces fun and delectable treats for adult hamsters, gerbils, rabbits, and guinea pigs.

Treats are safe, delicious, and nutritious and come in a fun variety of flavors such as Wild Harvest Glazed Doughnuts, which also promotes natural chewing instinct, or the crunchy and tasty Wild Harvest Pretzels, which are inexpensive and come in several fun colors. Both products are available from Amazon.com.

Read How To Bond With Your Hamster

Your Hamster Could Be Sick or Old

Unfortunately, stress isn’t the only reason your hamster may have stopped eating. A few physical ailments can cause hamsters to stop eating and even die if left untreated.

Sometimes hamsters develop abscesses in their cheeks, which will cause them to stop eating due to the pain and the inability to store food. The abscesses can happen if the hamster is injured, causing scrapes or cuts inside its mouth that can become infected.

Hamsters housed in groups often develop abscesses as a result of bites and cuts from fighting with other hamsters for resources. For this reason, most hamsters are housed alone, and if they must share a living space, then the cage must be large enough to deter fighting.

An abscess is a large, painful bump filled with pus. Abscesses can appear inside a hamster’s cheeks, giving the appearance of food stored within. You’ll know the hamster has abscesses when it seems as if it’s always carrying food in its cheeks.

If left untreated, abscesses can cause stomach issues for your hamster. They can also be cancerous! An abscess can’t be treated at home, so taking your hamster to a veterinarian is the only option.

Sadly, Wet tail is a very common bacterial infection in hamsters. As its name implies, the first sign of the illness is that your hamster’s tail area is dark with moisture. Wet tail is typically caused by stress, diet change, or too many hamsters housed in one cage.

Diarrhea is the cause of the wetness around the hamster’s tail, leading to the name. Signs of wet tail include loss of appetite and a lack of energy.

Wet tail is a contagious disease. Suppose you’re housing your hamster with other hamsters. In that case, you’ll want to isolate the sick hamster and take it to the vet immediately to prevent the risk of spreading the disease.

And last but not least, sometimes hamsters stop eating because they’re old. Hamsters only live two to three years on average. Around two years of age, they become slower and less active. A loss of appetite is natural and expected as they near the end of their life span.

In conclusion, there are several reasons why a hamster may stop eating. Stress, old age, and physical ailments can all factor into your hamster’s appetite, sometimes overlapping and compounding the hamster’s health.

Because hamsters are so delicate physically and emotionally, it’s always best to have a good veterinarian ready on hand. Open a savings account for your little guy because the next two to three years may cost you!