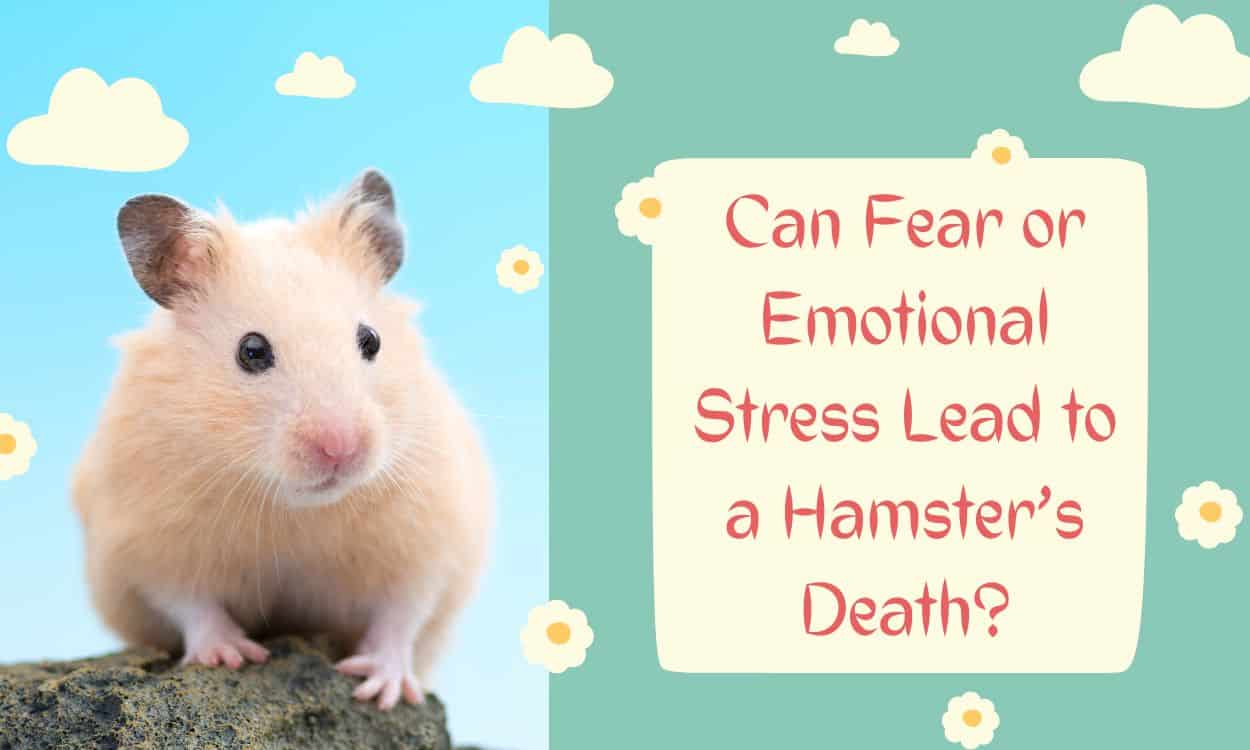 People in the USA who usually do not have the space, finances, or time to care for a dog or a cat prefer to keep hamsters as their pets.

Not only are these small rodents highly manageable, but they are also an extremely emotional and affectionate species.

However, unlike a cat or a dog, your pet hamster is far more sensitive to external stimuli. This means that while it can take in all your love, it will also easily get extremely scared when presented with a threatening situation.

While some hamsters go still and start playing dead when in fear, others can experience a more permanent and dangerous outcome. 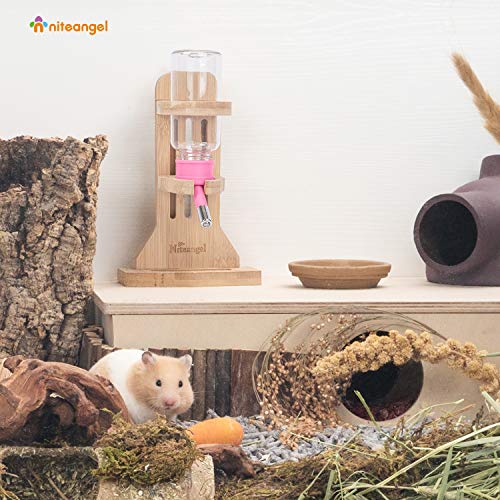 Can a Hamster Die from Being Scared?

If you have ever had the opportunity to care for a pet hamster, you probably know just how shy, affectionate, and loving they are.

Although a hamster is not one of the most common pets worldwide, many people still prefer them for their gentle nature and beautiful companionship.

However, although caring for a hamster is usually easier and far less expensive than caring for a dog or cat, one needs to pay extra attention to ensure that their fur baby feels safe and stress-free.

Hamsters are not aggressive animals and usually will not choose an attacking or aggressive stance during an unpleasant confrontation.

Instead, they are extremely emotionally sensitive animals and do not have the heart to face fears, threats, or any unusual and alarming external stimuli.

When a hamster is exposed to such a frightening or uncomfortable situation, it could react in multiple ways, like going completely still or playing dead.

However, in some more extreme circumstances, your pet hamster could also just kick the bucket for real.

Continue reading the article to learn more about the different scenarios, objects, or external stimuli that can easily and very severely frighten a pet hamster.

We’ll also discuss some of the common ways a pet hamster will react to a threatening stimulus.

What Are the Common Scenarios or Situations that Can Scare a Pet Hamster?

Unlike hamsters born and bred in the wild, pet hamsters have only been exposed to a life of captivity, quietness, and comfort.

Since pet hamsters spend the majority of their lives in either a pet store or at a person’s home, they are usually not equipped with the coping mechanisms needed to fight fear or external threats.

Hence, you can easily incapacitate a pet hamster when you scare it. On the other hand, a hamster living in the wild may be able to flee and hide from the threatening situation.

While most people assume their pet hamster will only get scared of a predatory animal, they are quite wrong. Any unfamiliar or intense movement or stimulus can trigger your pet hamster.

Here are just a few things that can scare your hamster and cause it to go into shock, or worse, die. 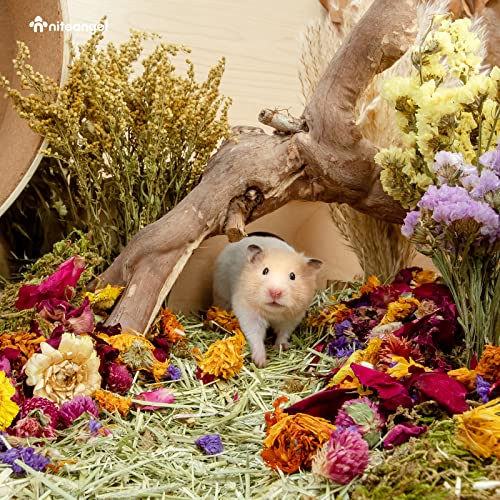 It is common for many people to complain that their pet hamsters act scared of them. This can affect the emotional bond they form with the hamster, which often leads to them not caring for it.

While people assume that their pet hamster simply does not like them, in reality, it is rapid or sudden movements that really frighten them.

For instance, if your hamster does not see you coming and you surprise it by picking it up, this rapid and sudden interaction will scare your hamster, and that fear will probably last well after the encounter.

Similarly, even if your pet hamster is resting on your palm or chest, any rapid movement of your arm, head, or body will register as a threat or danger in the hamster’s mind.

Apart from the owner, other rapid and unexpected movements can also scare the little rodent. For instance, if a cup falls off the table, the sudden crash will frighten your hamster.

Hamsters are extremely sensitive and reactive to their external surroundings. Hence, a sudden bright light can frighten them, triggering their stress-response mechanism.

For instance, if you suddenly shine a strong flashlight at your hamster resting in the dark, the sudden change in stimulus can scare them.

While the morning chirps of the birds will be alright for your furry little friend, loud music, a dog’s bark, or the sound of a crashing object will certainly raise its heart rate.

This is also one of the reasons a hamster can suddenly act scared of its owner when the owner changes the pitch of their sound or speaks louder than usual.

As mentioned above, hamsters are defensive and non-aggressive animals. In the wild, a hamster will dig a hole in the ground and hide itself as soon as it spots a larger predatory animal.

However, when your little rodent is in its cage or a hamster ball, there’s not much room for it to dig a hole and hide itself when your pet dog or cat approaches it.

This whole situation will be really stressful for your pet hamster, and if it’s severe enough, it can even cause the little guy to have a heart attack, leading to its premature death.

If you change your pet hamster’s cage or take it out in your car to visit the vet, you might scare it enough to trigger a response.

Pet hamsters don’t like change, and when you change their environment, this stresses them out, causing them to go into defensive mode.

If your friends, guests, or even family members suddenly enter your room, and your hamster isn’t used to having them around, they might see these new people as potential threats. 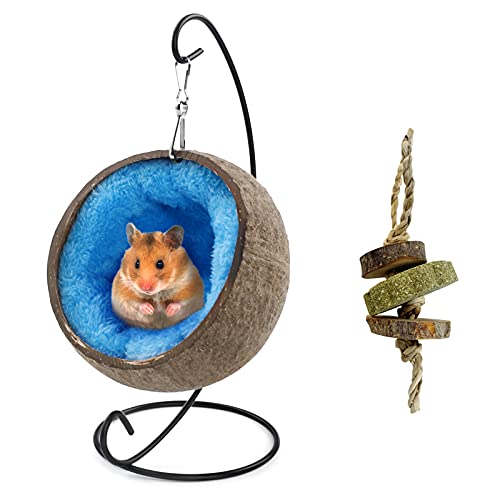 How Do Hamsters React to Threats?

As mentioned above, wild hamsters react to a threatening stimulus by hiding themselves in a hole or by acting dead. However, a pet hamster may react differently in such situations.

Here are a few ways a pet hamster will react to a threatening external stimulus:

Just like rabbits, a hamster, by nature, likes to dig. In the wild, hamsters are constantly found living and hiding in the holes they dig in the ground.

On the other hand, since your hamster is living in a cage, it’s very likely that you’ve never seen them try to dig up their surroundings.

However, when your pet hamster is exposed to a threatening external stimulus, its natural survival instincts kick in.

As a result, your frightened hamster may start digging up its bedding or mattress frantically to dig a safety hole.

Click on this link: Can Teddy Bear Hamsters Live Together?

In the wild, a frightened hamster has the opportunity to run away and hide until the threat has passed. However, a hamster living in a cage is as restricted as a goldfish in a bowl.

So when your pet hamster starts feeling threatened, its natural response might be to scurry around in circles across its cage in an attempt to run to safety.

Licking or Scratching itself Aggressively

The sudden or unexpected fear or frenzy can also trigger your pet hamster to aggressively lick or scratch itself in confusion and stress.

At times, a hamster’s distressed scratching can get aggressive enough to physically harm its body.

Perhaps, one of the most unique reactions to fear or an external threat that is displayed by both wild and captive hamsters is the act of playing dead.

Just as a lizard willingly detaches its tail to fool its predators, a hamster will fall to the ground, freeze up, and play dead.

The duration a hamster plays dead can be anything from a few seconds to even multiple hours. At times, the fear the hamster experiences makes it difficult for the hamster to snap out of this frozen state.

When this happens, the owner is advised to gently warm up the hamster using a solar bulb or a blanket to help calm its nerves. This will reduce its chances of having a heart attack.

Dying Due to a Sudden Heart Attack

If the external threatening stimulus is intense enough, it can cause your hamster to experience a heart attack. When this happens, your hamster might not be strong enough to survive it. 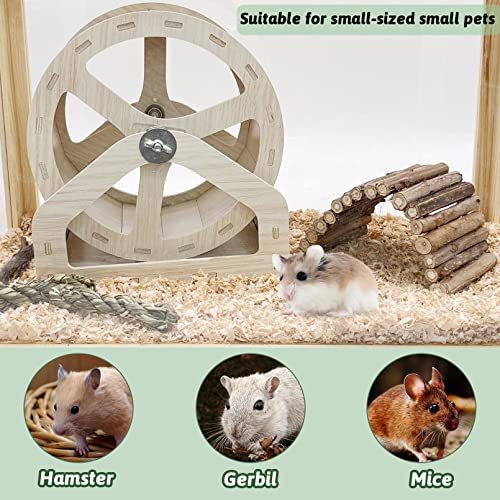 Being able to share small experiences and happy moments with a furry little pet hamster can be joyful and wholesome.

The direct interaction can help reduce your anxiety or stress levels and help replace those unwanted emotions with happiness and calmness.

However, keeping a pet hamster alive can be challenging if you fail to protect it from simple jump scares, loud sounds, predators, etc.

Hence, if you wish to enjoy the company of your small fur baby for a long time in the USA, you must place its cage away from loud sounds, other animals, unfamiliar people, and bright lights. Making this added effort will ensure that your pet hamster lives a long and happy life and continues to provide you with the companionship you want.

Have a look on more hamster articles: