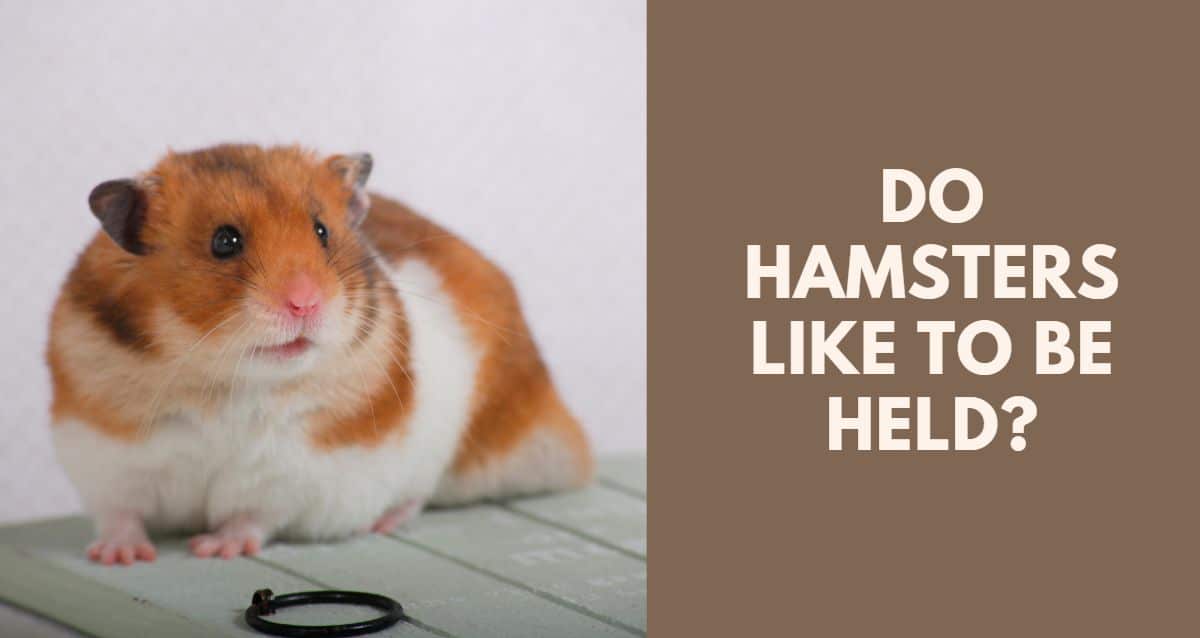 The behavior of hamsters varies across different species. Some can be timid, while others are a delight to be with right away. Some display repulsion towards physical contact, while others yearn to be closer to their owner.

So, do hamsters like to be held? There isn’t one answer to the question. Each hamster differs from the others in terms of personality traits. Hence, it’s essential to lay a good foundation and bond well with your hamster before picking it up.

How Do Hamsters React to Being Held?

Again, different hamsters react differently. Most are habitual of looking out for predators from a very young age. From their sleeping schedule to eating habits, everything revolves around protecting themselves from possible predators.

Hence, don’t be surprised if they don’t respond well to your attempts to bond with them. The chances are they will panic and even try to hide.

Some hamsters may not react at all. They might melt right into your embrace if they have grown into the new environment and are generally happy to be around you.

Others might like it at first but may begin resisting it shortly after. There is no single way to describe how each hamster reacts to being held.

It isn’t natural for them to be grabbed by a giant hand now and then. Unfamiliarity can play a role here. Hence, you want to focus on creating a healthy bond with your furry friend before attempting to tame it.

The Right Way to Hold Your Hamster

Yes, you read that right. There are wrong and right ways to hold your hamster. Do it wrong, and you’ll be screaming from that nasty bite.

Even though thousands of people in the United States own hamsters as pets every year, most people have it all wrong about holding them correctly. Unlike other animals, you can’t just grab them straightforwardly. Not only is it uncalled for, but it also frightens them immensely.

The best way to break the ice is by using the cupping technique. Slowly cup your hands underneath your hamster, wait a while and watch how it reacts. If there is no significant reaction, slowly lift it, and voila, you’re done.

The cupping technique helps them feel safe and protects them from falling off abruptly. Bring your hamster closer to your chest to take the same technique up a notch.

Some hamsters have the tendency to jump from your hands in the blink of an eye. This is why you must stay close to the ground when picking it up.

How Long Should You Wait Before Picking Them Up?

If you’ve just brought your tiny buddy home, wait a few weeks before attempting to pick it up. The deal is to build rapport with your hamster in small ways.

From feeding it to letting it sniff you, there are many ways to win its trust. Learn its schedule and accommodate it well.

Your hamster observes every move of yours. Over time, it will eventually become accustomed to the environment and begin responding positively.

Sometimes, it is only a matter of trial and error when it comes to winning your hamster’s trust. Time plays a crucial role here because almost every hamster will seem hesitant to be close to you at first.

The deal is to remain patient and keep trying. Once you’ve handled it enough, your hamster will begin responding more often.

Allow your hamster to settle in the new environment, and do not force any changes on it. Take the taming process slowly.

Start by gently whispering near its cage bars. You will notice how well it gets used to your presence over time. Most hamsters love food, so they quickly give in when you associate anything with their favorite treats.

Rest assured, it is one of the best ways to gain its trust. Offer treats to your hamster every once in a while, and it will soon view you positively. Hamsters are susceptible to sounds and smells. You can always use this knowledge to your advantage.

Make them accustomed to your smell and speak gently to them. Keep them away from any source of discomfort, and soon you’ll notice them approaching you themselves.

However, don’t expect your hamster to give in immediately. Let it investigate your hand as you move it through the cage bars. The process of gaining their trust is slow, but once you’ve made progress, you will see your furry friend cooperating in no time.

Most hamsters are indeed inherently shy. However, can they change and enjoy affection later on? Of course.

The key here is to learn how hamsters choose to express themselves. They won’t lick or cling to you as cats and dogs do.

They will be a lot more comfortable being themselves around you. They will also not reject your advances to hold them unless they’re excessive and unnecessary.

They won’t bite you and might even come close to the cage bars whenever they see you approaching. Sometimes, a hamster also expresses its affection to its owner by taking a nap right in the palm of its hands.

These are some classic signs that your hamster doesn’t mind your affection and has grown to enjoy it.

Do Hamsters Hate Being Held?

In a nutshell, no. Hamsters don’t naturally hate being held. However, they often resist the idea if there isn’t an adequate emotional connection with the owner.

What are some do’s and don’ts you can observe to ensure that they don’t hate the idea entirely? Fortunately, there are some steps you can take to make your hamster more comfortable in a short period. It all starts with you paying attention to the apparent dos and don’ts.

Winning a hamster’s trust is almost like winning a lottery. You may have to wait for weeks or even months before luck finally stands by your side.

As with every other animal, hamsters also have different emotional states. They also experience different feelings in their capacity. However, they won’t always be transparent about them.

In fact, in most cases, hamsters do not even display signs of discomfort or distress. They keep them concealed until it’s too late. This is because they have always been on the lookout for predators. Expressing their emotions and feelings can put them at risk of being found.

While they aren’t capable of tearing up, hamsters often squeak or scream when they’re upset or in distress. At this time, it’s imperative that you try to calm it down gradually.

Similarly, a happy hamster will show excitement by not resisting you and allowing you to pick it up. It won’t be violent towards you, and it will also somewhat enjoy being caressed and patted. However, achieving this state in a hamster is almost like a milestone.

Do hamsters like to be held? Yes, but only once they’ve spent enough time around you and have grown to enjoy your company. Nonetheless, it’s a long and complicated process, and there’s no guarantee that your furry friend will reach this point.

This is why learning to handle and tame hamsters is extremely important before you decide to take them in. They aren’t your regular pets and won’t enjoy the same activities as other animals. Their diet widely differs from other animals, and they aren’t inherently comfortable around humans.

Again, each hamster comes with its temperament. They have their personalities, rules, and boundaries. They’re super sensitive to changes and will not always respond the way you want them to.

The key is to grow into their lives as owners and respect their schedules. Over time, they will have no reservations about your advances toward them.