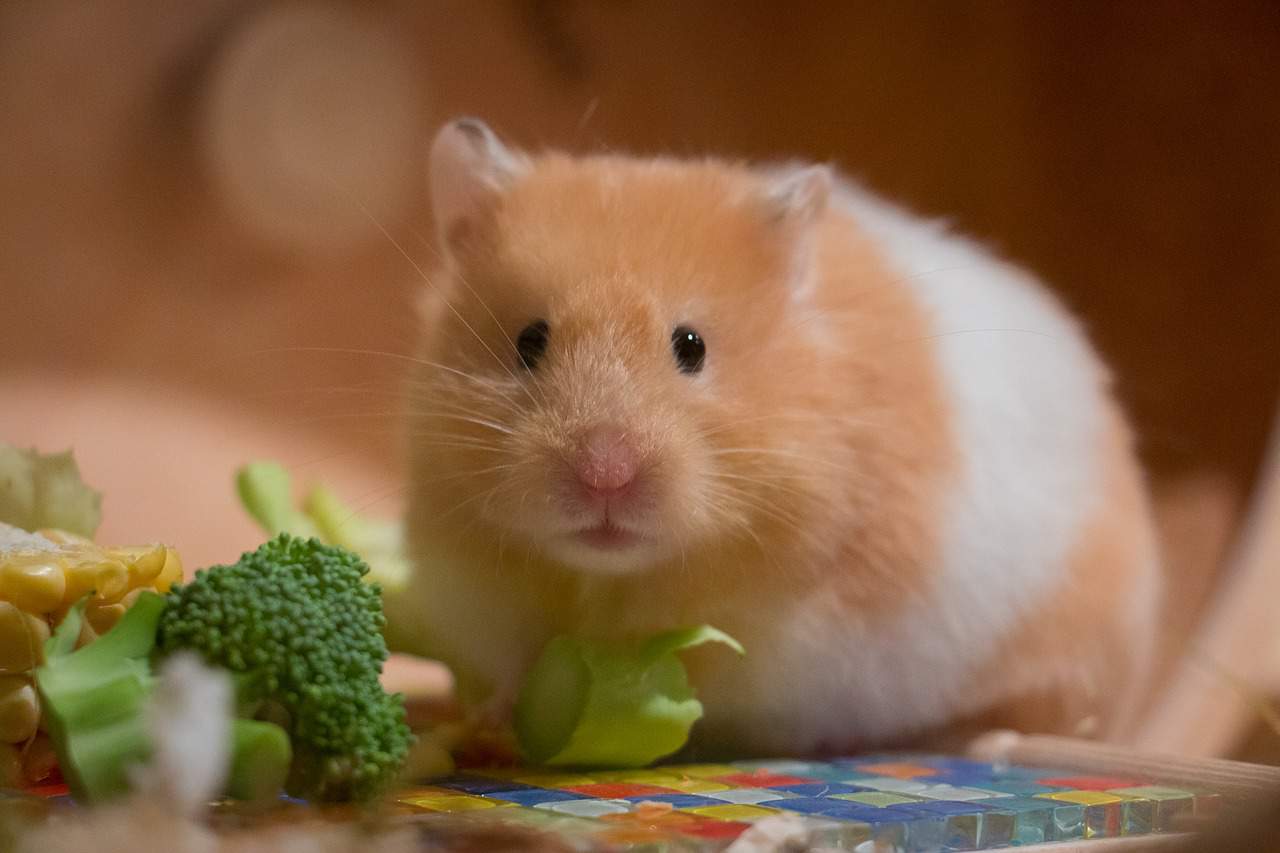 Hamsters exist worldwide. Whether you’re in Louisiana or Colorado, people everywhere love their adorable pet hamsters, with some opting to breed and extend the hamster family tree. But how many times can a hamster get pregnant?

Hamsters can get pregnant three to four times throughout their life. It is possible for a hamster to have more than four pregnancies, but that may impact their overall health and shorten their lifespan.

Continue reading to learn more about the pregnancy process for a hamster, and how it may impact their overall health.

Contents show
1. The Pregnancy of a Hamster
2. How Long Is a Hamster Pregnant For?
3. What To Expect From a Pregnant Hamster
4. How Many Offspring Do Hamsters Produce?
5. How To Know if My Pet Hamster Is Pregnant
6. How To Prepare for the Birth of My Hamster’s Offspring
7. Handling Your Hamster’s Offspring
8. How Do I Help My Hamster Recover From Birth?
9. In Conclusion

The Pregnancy of a Hamster

Hamsters are friendly animals with a high pregnancy rate, despite their relatively short lifespan. It is very common for hamsters to get pregnant, especially during their youth.

Hamsters should only be pregnant four times throughout their life to preserve their overall health. As a result, most health professionals recommend that hamsters get pregnant during their first year.

Unfortunately, some hamsters only live for twelve months. After twelve months, a hamster’s health begins to deteriorate, especially if not well fed or properly groomed.

A hamster’s body is fragile and rather sensitive, and having more than four pregnancies can impact their ability to live a long and healthy life.

It is also crucial that hamsters have plenty of resting time between every pregnancy. If not, major health issues can arise, such as stress, strain on the body, and disease.

If you have a pet hamster and are interested in getting her pregnant, then it’s best to plan for the pregnancy after they are ten weeks old and before they reach fifteen months.

For best outcomes, it is advisable to leave the breeding process to experienced breeders as female hamsters are known to become aggressive during mating.

An experienced breeder will advise you on the do’s and don’ts of handling a pregnant hamster, which is vital if you want a successful breeding process.

Read What Can You Feed a Dwarf Hamster?

How Long Is a Hamster Pregnant For?

Hamsters are pregnant for 16-30 days, and professionals monitor their overall health throughout the entire process. This time frame can vary in some pregnancy cases but is standard for most hamsters.

The pregnancy process always begins with mating, which includes pairing up a female in the heat with a male hamster in the same space. Sometimes, breeders will pair one male with multiple females to find a match.

During the mating process, females can become somewhat territorial and aggressive. As previously mentioned, it is recommended that professionals are available to help with the breeding process.

It is also essential to pair the right hamsters together as some combinations can lead to genetic defects. Therefore, if the mating process is not well done,  issues can arise with the overall health of the hamster’s liter.

Once a hamster is pregnant, the process moves fairly fast since hamsters are only pregnant for two to four weeks at a time.

What To Expect From a Pregnant Hamster

Pregnant hamsters go through the same process, although the pregnancy might be shorter (or at times longer) in colder states like the Dakotas, Maine, and Alaska. Most female hamsters exhibit relatively similar pregnancy symptoms and require the same care and attention.

As previously noted, hamsters are only pregnant for a few weeks. Pregnancy symptoms and timelines in hamsters tend to vary depending on breed. As a result, it is best to research more about your hamster’s breed to learn how to handle pregnancy.

Hamsters tend to be very restless during pregnancy and can be irritable if not extremely aggressive. However, the most noticeable pregnancy symptom for female hamsters is their bellies, which get worryingly large right before giving birth.

Other symptoms may include stress and unusual behavior.

Before birth, you can make life easier for your female hamster by placing nesting materials inside the cage. On most occasions, female hamsters adjust to motherhood and take good care of their pups.

Unfortunately, develop negative attitudes towards their offspring after giving birth, and can even eat their pups or abandon them altogether.

Read How Long Can a Hamster Go Without a Wheel?

How Many Offspring Do Hamsters Produce?

All hamsters have the capability of producing many offspring. Even if some pups do not survive after birth, it is common for hamsters to have many pregnancies with many offspring.

Hamsters produce four to six pups in one liter on average. Hamsters rarely have more than eight in a liter, but it is possible. A hamster can have as many as twelve pups in one liter if her body is in excellent shape.

Hamsters give birth to offspring prematurely most times, meaning their pups are likely to be born hairless and with their eyes closed. The one attribute they have when they are born is their front teeth.

For the first seven days, new hamsters are usually in an adjustment phase and as such, should be left alone. After seven days, then you can start handling the tiny pups, but of course, with a lot of caution as they’re highly fragile.

Hamster pups remain in the growth phase for a bit and can wean off around three to four weeks after birth.

Impressively, hamster pups can start eating solid food after ten days. However, the food must be mixed with water for ease of consumption and proper digestion. For best outcomes, it’s advisable to start baby hamsters with healthy diets such as millets and wheat germ cereal.

The relationship a mother has with her pups plays a massive role in their development. Unfortunately, some mother hamsters fail to recognize their pups as offspring, instead of viewing them as territorial threats.

The lack of recognition and competition for resources can result in death if you don’t intervene.

Read Why Is My Hamster Drinking So Much Water?

How To Know if My Pet Hamster Is Pregnant

The good thing about hamster pregnancies is they’re easily detectable as a female hamster’s belly will grow larger in a matter of days.

You will know your pet hamster is pregnant if her stomach grows larger than usual. It is crucial to check for signs because, sometimes, you might be dealing with underlying medical conditions instead of pregnancy.

Medical issues like tumors and bladder stones can lead to weight gain in female hamsters, which can be easily mistaken for pregnancy. This explains why you should always consult with your local vet if you suspect your hamster is pregnant.

When purchasing a hamster, it is important to buy from a reputable breeder with a medical background of the hamster.

Your hamster is probably pregnant if three or more of the following points are true:

Read How To Keep a Hamster Cage From Smelling

How To Prepare for the Birth of My Hamster’s Offspring

Having a pregnant hamster is an experience of a lifetime that requires effort and preparation for everyone involved. Consulting with an expert or researching online could be of assistance if you want to be directly involved in your hamster’s pregnancy and birth process.

A hamster’s pregnancy term is relatively short, and can even go unnoticed if you don’t pay close attention to your hamster several days after mating. Therefore, you should dedicate some time to play and inspect your female hamster after mating. By the tenth day, her tummy should have enlarged slightly, which should act as proof of pregnancy.

When preparing for the birth of your hamster’s offspring, you should work towards making your hamster extra comfortable to smoothen the process.

And since birth might be a new experience for you and your hamster, it is crucial to observe the following steps:

After your hamster gives birth, it will also be best to give your hamster space and time with her offspring. Pet parents should not hold hamster offspring for the first seven days, so it is best to leave their space alone.

Nevertheless, do make sure your hamster and her pups have food, water, and any necessary supplies.

It can be frightening to handle young hamsters, especially ones that have yet to develop sight and hearing. At such a young age, hamsters are sensitive creatures that need lots of rest and hydration.

Do your best to avoid handing your hamster’s offspring during their first week of life. Once they reach one to two weeks after birth, then you can start the bonding process. Limiting interaction as much as possible ensures the baby hamsters grow as expected.

For the first month of your hamster pup’s life, they will be in the process of development and they won’t wean off of their mother until after three to four weeks.

Most times, the process of growth for offspring is simple. The biggest concern is around safety and providing them the time to mature. It may also be of assistance to have a checkup with your veterinarian specialist once your hamster gives birth to ensure everything runs smoothly.

Practice patience and caution, and only hold the offspring when needed, especially during their first week or two of life. Once they wean, hamsters are much more stable and ready to enter their permanent home.

Hamsters should be sold or adopted after three weeks. Individuals should not purchase hamsters before then as doing so might interfere with their growth and development. Ideally, the best time to buy or adopt a hamster is before the seven-week mark.

How Do I Help My Hamster Recover From Birth?

Hamsters are resilient animals despite having a short lifespan. They can be pregnant a few times during their first year of life and still keep their overall health intact.

You can help your hamster recover from birth by giving them lots of rest, hydration, and the proper diet. Hamsters should be given a lengthy resting period before becoming pregnant a second, third, or fourth time.

During your hamster’s pregnancy, they should have a healthy diet that supports the growth of their offspring and their own body. That diet should continue for one month or longer after they give birth.

Here are a few tips for helping your hamster recover after giving birth:

Hamsters are well-known all over the world and loved by many. Bringing home a pet hamster can be a rewarding experience, especially if you want to breed and have several pups either for sale or as additional pets.

The trick when dealing with pregnant hamsters is to keep their cages as neat and comfortable as possible. You should also give your pregnant hamster enough time to rest.

While hamsters can be pregnant three or four times throughout their lifetime, they don’t have to be pregnant either. All that matters is that your hamster is healthy, happy, and free.