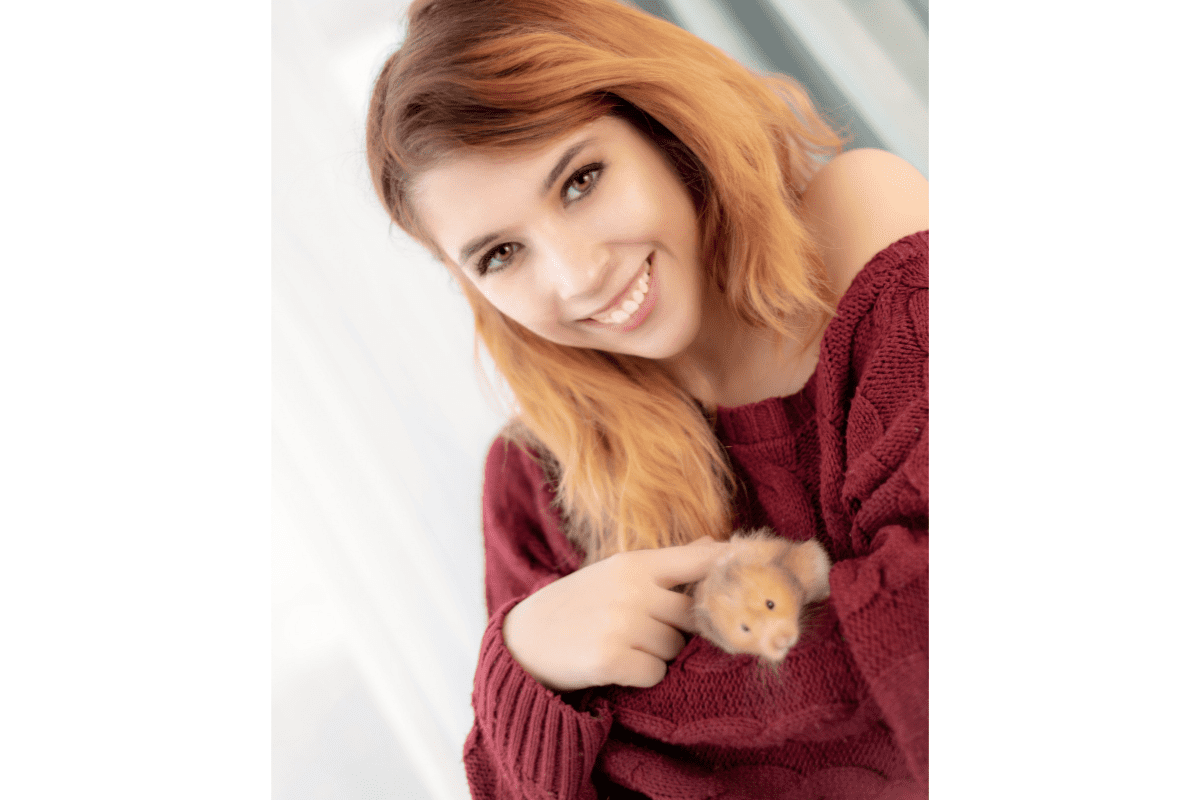 So, you’ve brought your first pet hamster home, plopped it into its cage, and left it alone for a few hours. Then, you reach your hand in, but instead of running over and starting to sniff you, your hamster stays in the corner of its cage, shaking in terror. How do you get from that to the cuddly hamsters you’ve seen your friends have?

Here are 8 tips for training your hamster to cuddle with you:

How To Train Your Hamster To Cuddle

By reading this whole article, you’ll learn several tips and tricks that’ll help encourage your hamster to cuddle with you and make them feel safe while doing so.

The single best thing you can do to get your hamster to cuddle with you is picking the right hamster. Hamsters, like all rodents, are most easily impressionable when they’re young.

They haven’t solidified their habits yet, so it’s going to be far easier to get a young hamster to cuddle with you than an adult hamster that has never had human interaction in its life.

Alternatively, if you don’t want a baby hamster or you can’t find any in your area, you should be able to find previously owned hamsters to adopt at local animal rescues, and pet stores will sometimes have them as well.

You won’t have been able to train these hamsters from the time they were babies, but it’s possible that someone else may have put the work in for you because they were previously owned.

If you choose to take the adoption route, then make sure that you’re able to meet the hamster and interact with it before you take it home. That way, if there are any behavior issues, you can find out about them then instead of discovering them once the adoption process is already complete.

Read How To Make Your Hamster Happy

When you first bring your hamster home, you’ll want to leave it alone in its cage for at least a couple of days. It can be hard to resist taking it out. After all, you got a hamster because you wanted to play with it, but it’s an important part of the training process.

This is your hamster’s first impression of you, and you don’t want to rush things to the point where you scare them. If you scare them, it can set the training process back by several days.

Remember that your hamster is a prey animal, and it’s skittish by nature, so you’re going to need to spend lots of time working with it to overcome this.

Predator pets, such as cats and dogs, don’t have the same skittish tendencies, and it can still take them several weeks to settle in. So keep this in mind when you start the training process with your hamster. It’s going to take a while.

Read Difference Between a Hamster and a Gerbil

Hamsters, like most pets, tend to be extremely food motivated. Your hamster isn’t going to have a natural positive association with you, so you’re going to need to work to create one. The best way to do this is with food.

One good option is to take one of your hamster’s meals for the day and feed it to them by hand. That way, if they want their food, they’ll need to come to you.

Quick disclaimer with this one: This doesn’t mean depriving your hamster of food. Hamsters are so small that they need far more constant access to food than we do, and taking away their food for any period of time could have disastrous health effects.

Instead, you’ll simply want to try and offer the food by hand for the first 15 minutes or so. Then, if they still aren’t coming, put the food in their bowl and try again another day.

Some good treats for your hamster are fresh fruits and vegetables, more vegetables than fruit, as hamsters don’t do well with too much sugar.

They also typically like any sort of grain-based treat. You can try offering them cooked grains of rice or a sugar-free grain-based cereal as a treat as well. These are usually well-received and of higher value than simply offering them their own food as they’re not exposed to it all the time.

When you give “high-value” treats, especially at first, make sure you’re only giving them to your hamster out of your hand. That way, they have their regular food, so they always have a food source, but if they want something with more variety or that they like more, they’ll need to come to you.

4. Allow Your Hamster Outside of Its Cage

One of the best things you can do to help your hamster build confidence, which will, in turn, make it more likely to cuddle with you, is to allow them to roam around outside of their cage.

In the wild, hamsters are roamers and have very large territories. By confining them in a cage all the time, you’re minimizing that territory which will make your hamster less confident.

Also, think about the way you remove your hamster from its cage. For the most part, you’re going to have to reach into the cage and grab it, something that hamsters are notoriously afraid of.

If your hamster is roaming outside of its cage and you’re in the room, they’ll have the opportunity to approach you in their own time. This will help to minimize any nervousness because you’re not creating a forced proximity situation.

Before you allow your hamster outside of its cage, you’ll want to make sure that the whole room has been hamster-proofed.

Make sure any small holes are covered up, and any wires or other dangerous objects have been removed from their reach. You don’t want to let your hamster out just to have them escape and disappear into the walls for months.

Hamsters aren’t climbing rodents. They’d naturally spend the majority of their lives with all four feet planted firmly on the ground. With that being said, they’re used to feeling fully supported, and if they feel that they aren’t secure while you’re holding them, they’re likely to try and run away.

When you pick up your hamster, make sure that you support their whole body with both hands. That way, they never feel one of their feet slipping off you, which will make them very nervous.

6. Stay Low to the Ground

Another tip that specifically applies to when you’re cuddling with your hamster is to stay low to the ground. As I previously stated, hamsters tend not to be big fans of heights, and holding them several feet off the ground will make them nervous.

If you’d like your hamster to stay with you and be comfortable with the cuddling that’s going on, it’s best to stay as close to the ground as possible.

You can do this by either sitting on the floor or sitting on another surface such as a couch or bed so your hamster doesn’t have far to fall if it does decide to try and jump away.

That’s another big reason to stay close to the ground. Hamsters have very limited depth perception, so it’s pretty common for them to jump from great heights thinking they’re closer to the ground than they are. This can result in serious injury or even death.

Read How Much Does a Dwarf Hamster Cost?

Hamsters are desert animals, so they shouldn’t get wet, but you can groom them in other ways. You can use a soft toothbrush to brush their fur, something that many hamsters love. When you’re petting them, you can also gently tug on their fur as you do so.

This will mimic the sensation of another hamster grooming them. This is especially helpful when you’re trying to cuddle your hamster, as it’ll encourage them to remain in one place while cuddling.

Read How To Care for a Dwarf Hamster

8. Pay Attention to Their Body Language

When you’re trying to cuddle your hamster, remember that they can’t talk, so you’ll need to pay attention to their body language to tell how they’re feeling about everything that’s going on.

If your hamster seems relaxed, their eyes are relaxed, and they’re not trying to get away, then you’re in the clear, and your hamster is likely enjoying the cuddling.

If they begin to chatter their teeth, growl, or their body language seems tense, and their eyes are wide, then that’s a sign that they’re nervous and could bite.

In this case, the best thing to do is return your hamster to their cage or a different space where they feel safe so they can calm down, and you can try again later.

Hamsters can make great pets as long as you’re willing to put in the work to train them. After all, they’re prey animals that are naturally scared of humans. If you’d like to get your hamster to the point where they enjoy cuddling with you, here are a few good tips that’ll help you to do that:

All of these tips will help your hamster to feel as safe as possible, which will, in turn, help them to enjoy cuddling with you.