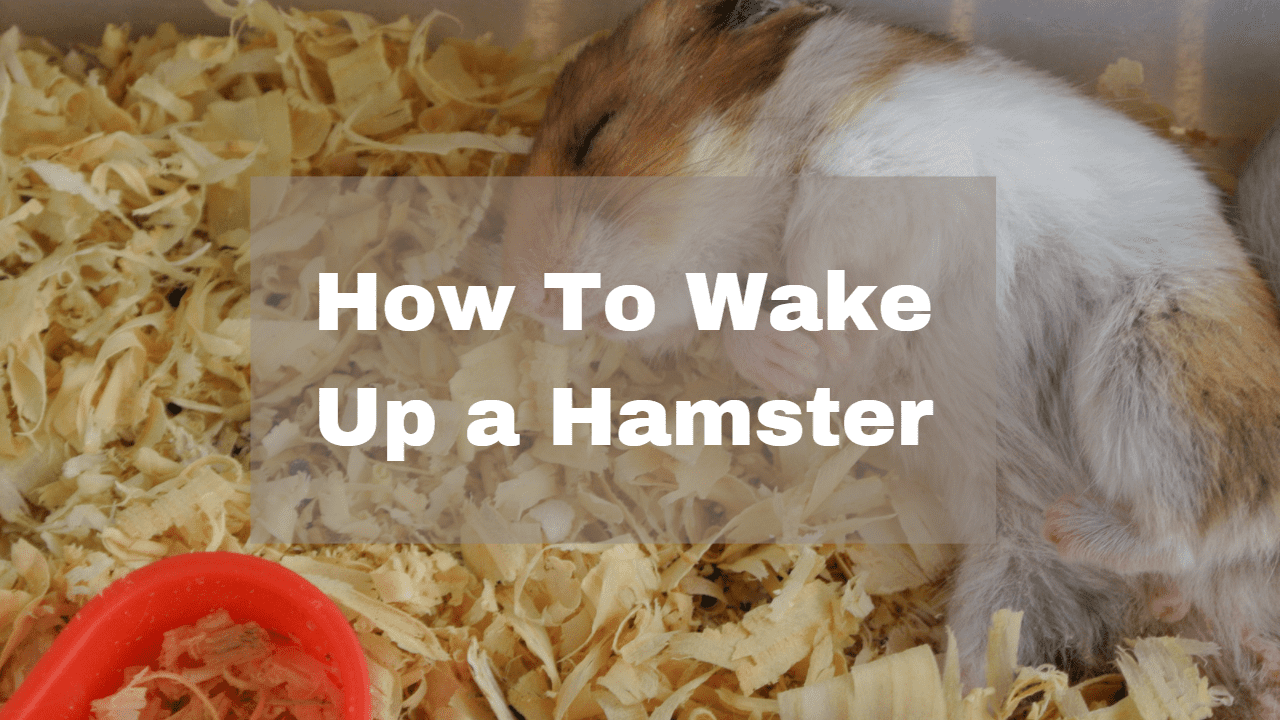 As you may or may not know, hamsters are prey animals, so they’re sensitive to their surroundings and stimuli as it’s their instinct to be on high alert. That said, it’s crucial to know how to wake them up in ways that won’t startle them!

Here are a few practical ways you can wake up a hamster:

I’ll elaborate on the points mentioned above and discuss various topics, including what not to do when waking up your hamster, what to know about hamsters in hibernation, and what to do if you suspect your hamster is sleeping too much. Keep reading to learn more.

1. Gently Blow Air on Your Hamster’s Face or Body

Gently blowing air on your hamster’s face or body is one of the most effective ways of waking them up, granted you don’t wake them with a huge gust of air.

Slowly and gently blow the air out, then gradually increase the intensity till your hamster wakes up. This strategy is helpful with many animals and is how most pet owners with deaf animals wake their pets up or get their attention.

2. Change the Lighting in the Room Your Hamster Is Sleeping

Making the room your hamster is sleeping in darker has a good chance of waking them up. Since hamsters tend to be most active around dawn and dusk, darkening their environment may trigger them to wake up since they’ll pick up on the change in lighting and assume that it’s time to wake.

3. Lightly Tap on the Bars of Your Hamster’s Enclosure

Hamsters can hear far better than humans, and they can pick up on frequencies that we can’t. Knowing this, lightly tapping on your hamster’s enclosure bars will grab their attention. Start light at first, and slowly increase the intensity if your hamster doesn’t budge the first few times.

4. Softly Speak to Your Hamster

5. Offer Your Hamster a Treat

Putting your hamster’s favorite treat under their nose may be able to awaken them. Hamsters also have a powerful sense of smell (this makes up for what they lack in eyesight), and they can recognize their owners by their scent, so your hamster will more than likely be awoken by the smell of their favorite snack!

If you don’t have store-bought hamster treats on hand, you can offer your hamster a piece of fruit or vegetable (fresh and organically grown is best).

Changing the temperature of your hamster’s enclosure is another way to wake them without frightening them. You can turn up the heat of the whole room or shine a lamp above your hamster’s environment to signal them to wake up.

Heating your hamster’s environment is helpful because hamsters tend to sleep more in colder conditions, so warming their enclosure is a great way to signal them to wake up.

What Not To Do When Waking Up a Hamster

As much as it’s essential to know what to do to wake up a hamster, it’s also necessary to know what not to do. You have to be cautious not to startle your hamster when you wake them up, as this could cause them to feel unsafe in their enclosure.

Below is a list of what not to do when waking up a hamster:

All of the bullets mentioned above are crucial to remember. Doing any of the mentioned points will cause your hamster to become defensive and scared, as they’ll start thinking you are a threat to them and their safety.

Unfortunately, hamsters are hyper-vigilant no matter their surroundings, so it’s essential to keep this in mind when interacting with them.

What To Know About Hamsters in Hibernation

While hamsters aren’t true hibernators, they experience a similar process known as torpor. Torpor is a state of involuntary, reduced physiological activity in response to decreased body temperature.

Torpor generally lasts for a few hours to a few days. In contrast, hibernation can last for a few weeks or months and is a voluntary process (the terms are interchangeable since the processes are similar). There are a few things you should know about hamster torpor.

Hamsters Are More Likely To Be Torpid in Cold Conditions

A steady temperature between 65-70 °F (18-21 °C) is ideal for your hamster. Anything less than that increases the likelihood of a hamster entering torpor, so if you live somewhere cold like New Hampshire or North Dakota, your hamster will likely be in a state of inactivity quite often.

To prevent your hamster from frequently being in torpor, ensure you place their enclosure in a warm room or keep the heat at 65-70 °F (18-21 °C).

Torpor can be frustrating to owners who want to play and spend time with their hamsters but can’t since torpor takes place most of the day, so keeping your hamster’s environment warm is the best way to prevent excessive hibernation.

Not all hamsters experience the same kind of hibernation. For example, female hamsters hibernate for a lesser time than male hamsters.

Hibernation behavior depends on the kind of hamster you have, so it’s important to do your research before adopting any hamster to ensure you’re aware of any processes they may go through.

Many people are unaware that hamsters experience something very similar to hibernation, so the more you know, the better.

Signs Your Hamster Will Start Hibernating and Is in Hibernation

Hamster owners unaware that hamsters experience a phenomenon similar to hibernation are often scared when they first notice them in that state since they tend to appear lethargic and sometimes lifeless. So it’s important to be aware of the signs of a hamster about to enter torpor and a hamster in torpor.

When temperatures drop to below 65 °F (18.33 °C), you can expect your hamster to hibernate. Hamsters will only hibernate when it starts getting cold, so once winter starts approaching, don’t be alarmed if your hamster is inactive.

If you have a thermostat, you can prevent hibernation or bring your hamster out of torpor by keeping its environment warm.

Your Hamster Has Been Binge-Eating

Binge-eating is a hamster’s way of storing food for the winter since they won’t be able to eat during hibernation. Binge-eating is a common sign of hibernation in any animal, so if you notice your hamster eating a lot more than usual, it may be preparing to enter torpor.

Your hamster won’t eat or drink anything during their hibernation, so if their food and water bowl is untouched, there’s a good chance they’re in torpor.

Your Hamster’s Breathing Is Shallow

If your hamster is taking short, slow breaths, they’re likely in torpor. A hamster’s breathing and heart rate will slow down because the rate of respiration decreases during hibernation to conserve energy.

Your hamster’s body may be so cold and stiff, to the point where it frightens you. Many hamster owners have reported thinking their hamster has died since its body was so rigid during hibernation, but worry not.

A hamster won’t feel warm during hibernation since no physiological activity occurs, and stiffness is normal during torpor.

It’s critical to note that you should not let your hamster hibernate for extended periods, as the longer they hibernate, the more their lives are at risk. Hamsters quickly become dehydrated when they’re in torpor, and since hamsters are so tiny, it’s unlikely that they’ll survive long while dehydrated.

As mentioned above, hamsters aren’t true hibernators, so they’re not meant to experience hibernation to its full extent. If you notice your hamster in torpor, the best thing you could do is draw them out of that state as soon as possible.

Reasons Why Your Hamster Is Sleeping Often and What To Do

Since hamsters are crepuscular (active primarily during dawn and dusk), you can expect them to be asleep for most of the day. However, you know your hamster, so if you suspect it’s sleeping far more often than usual, here are potential reasons and what you should do.

Your Hamster May Still Be Adjusting to Their New Environment

If your hamster is still new to your home, it may still feel uneasy and nervous and require time to get used to its new surroundings.

Hamsters aren’t the biggest fans of change, so when you first bring them home, they’ll likely be unwilling to interact with you and spend most of their time marking their enclosure by leaving their scent everywhere and sleeping.

You May Not Be Noticing When Your Hamster Is Awake

Since a hamster’s sleep cycle is far different than humans, there’s a good chance you could be missing when they’re awake. It’s normal for hamsters to sleep a lot throughout the day since they’re crepuscular/nocturnal, so it’s important not to rule out the possibility that they’re up all night while you’re asleep!

However, their sleep is generally in segments throughout the day, so seeing them awake during daylight isn’t out of the ordinary.

Your Hamster Could Be Unwell

If you notice your hamster isn’t keeping up with its routine (dinnertime at six and free-roam at seven) and is sleeping instead, there’s a possibility that your hamster may be sick. However, frequent slumber doesn’t always indicate illness.

If your hamster exhibits additional symptoms alongside sleeping all the time, such as a loss of appetite and wet tail (a term used to describe diarrhea in hamsters), take it to a vet as soon as you can.

Allow Your Hamster To Adjust to Their New Environment

If you just brought your hamster home, it’s critical to give it space and time to adjust. It will take time and patience before your hamster starts getting comfortable, but it will be more likely to trust you and feel safe around you if you’re patient with them.

It may be frustrating since you’ll want to interact and play with your hamster, but giving them time to get comfortable around you and their new surroundings is critical, even if it means letting them sleep a lot.

When your hamster is sleeping, it’s best not to wake them up. Nobody likes being woken up when they’re asleep, and the same goes for animals. Hamsters usually sleep in two to three-hour segments throughout the day, so rather wait till you find them awake to interact with them.

Contact the vet if you’re worried your hamster is sleeping way too much. Excessive sleeping isn’t always a sign of illness, but it can be alarming. It’s always better to be on the safe side, especially when it comes to your pets, so if you notice anything out of character for your animal, contacting a professional is always the best option!

While adopting a hamster is exciting, it can be annoying when you realize they sleep often. As frustrating as it may be, it’s essential to allow your hamster to rest as much as they need since waking them up isn’t a good idea unless it’s an emergency.

Waking up a hamster for no good reason can cause them to be moody and even dislike you, so it’s best to let them sleep and enjoy your interactions when your hamster is awake and ready to be in your company.