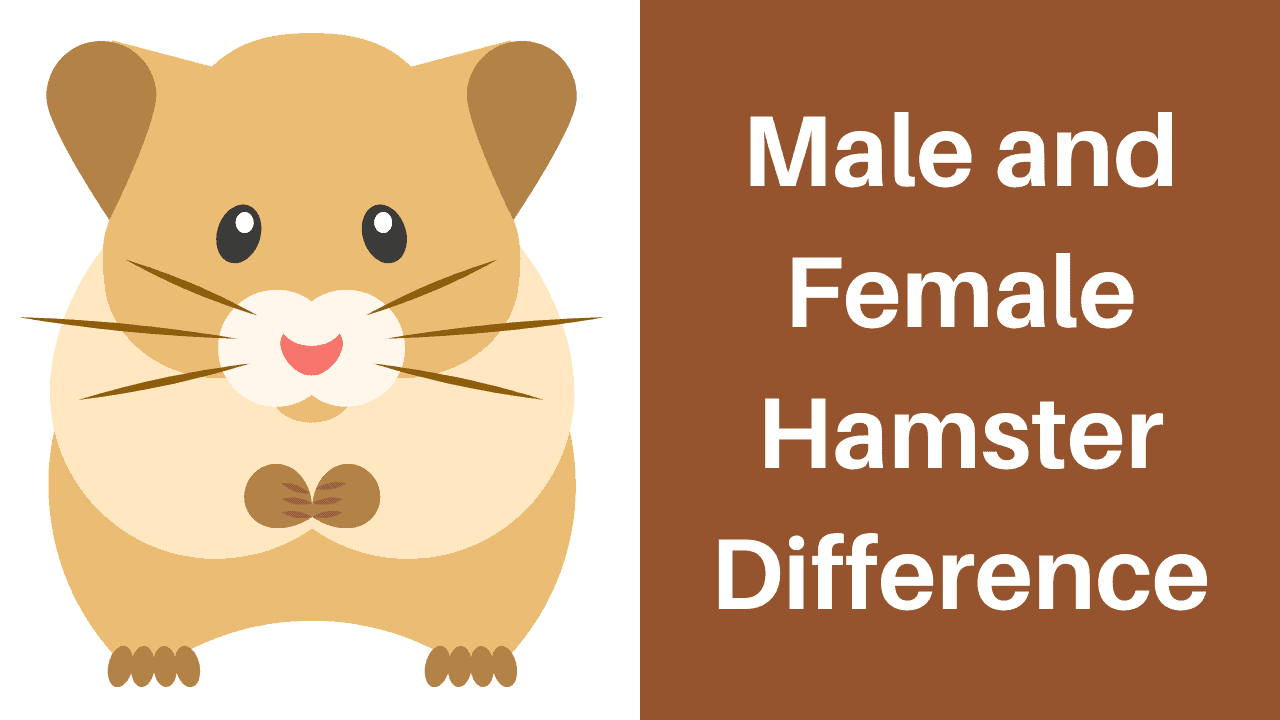 Hamsters are tiny, loveable creatures, and they have different characteristics depending on their breed. Like any animal, hamsters also have differences according to their gender: male or female. When choosing a pet, it’s essential to know how the different genders behave and if they need special attention.

The Difference in the Hamsters’ Sizes

The Difference in the Hamsters’ Anatomy

Underneath all the fur, female and male hamsters have different anatomy to help you identify them.

Hamster’s genitalia will also be one of the critical identifiers between male and female hamsters. You can determine a hamster’s gender by looking at the space between its genitalia and anus.

Male hamsters will have a larger space between their penile opening and excretion hole. The size of this space will help you determine if your hamster is male or female. The distance between these two organs will be much more prominent in males.

Male hamsters also have testicles that stick out from their body instead of the female vagina, which is an opening. However, some adult males can retract their testicles, making them hard to see. Focus on the space between the hamster’s anus and genitals to determine your hamster’s gender accurately.

Read Why Is My Hamster Wobbling and Falling Over?

The Difference in the Hamster’s Behavior

A hamster’s behavior will tell you a lot about the breed of the animal, but it can also reveal insights into the hamster’s gender. Male and female hamsters behave differently and have various aggression levels.

Both male and female hamsters tend to be aggressive, mainly depending on the breed. Syrian hamsters are often very aggressive and cannot be housed together in the same cage. Other hamster breeds, like dwarf hamsters, are more docile, and you can keep them together as long as they are the same gender.

Both genders of hamsters can be territorial and exhibit aggressive behaviors. However, male hamsters are more mellow and laid back. It would be best if you didn’t put adult male and female hamsters in a cage together because they will fight each other. Most hamsters will fight until one dies, so it’s best to keep them separate to avoid an accident.

Female hamsters, regardless of breed, have more aggressive temperaments and are more territorial than males. It’s more complicated for owners to handle female hamsters, and if you have a family with young children, you might want to consider adopting a male hamster for this reason.

They aren’t as territorial about their space, meaning that you will be more likely to enter their cage and play with them without worrying about being bitten. Because of this, male hamsters also take less time to adjust to being handled by a human, making them great pets for people who don’t have the time or patience to train a new animal.

Read Why Is My Hamster Acting Weird?

The Difference in the Hamster’s Activity

Like hamsters have different behavioral tendencies according to their gender, they also like various activities based on their gender.

Because female hamsters tend to be more aggressive, they are generally more active than males, and they love exercise and activity. Female hamsters will most likely busy themselves by:

Female hamsters enjoy playing, and they love engaging in play that involves activity. They will enjoy it when their owners play with them and engage them in games or toys.

Male hamsters, on the other hand, prefer slower-paced and leisurely activities. While female hamsters enjoy rigorous play and exercise, male hamsters will enjoy cuddling with their owners. You likely won’t find a male hamster busying himself with unnecessary movement.

Male hamsters naturally make great cuddle partners, and the more you handle your hamster, the more it will get used to your scent and being in your hands. When hamsters are comfortable with you, they will be more relaxed when you handle them and more prone to want to stay in your hands or lap.

Even though male hamsters love to cuddle, it doesn’t mean they don’t like to exercise. In fact, hamsters owners should be careful with the amount of time they spend cuddling with their hamster so that it doesn’t become obese.

Be sure to give your hamster enough exercise so that it stays healthy. If your hamster doesn’t like using a wheel, you can put it in a hamster ball so that it can safely explore your home while getting its exercise.

Hamster wheels are sold online and in pet stores all across the USA. Petsmart and Petco are popular pet supply stores with locations in various states from California to New York. Visit your local pet supply store to find the perfect hamster wheel for you and your pet.

Read How To Travel With a Hamster

The Difference in the Hamster’s Odor

While the female hamsters are in heat, they release an odor that lets the male hamsters know they are ready to mate. This odor is intense and often smells musty to humans.

You can differentiate between a male and a female hamster by the scents they emit. If you notice a persistent body odor or musk smell, you’re probably dealing with a female hamster.

The Difference in the Hamster’s Fur

You can identify a male or female hamster by its fur. Male hamsters generally have much more hair than females, so their coats are fuller and thicker. Hamsters typically require relatively little maintenance on their fur, but some male hamsters’ coats can grow long and unruly and require a small amount of grooming.

Hamster’s coats often thin out over time as they reach the senior stage in their life. This thinning is more significant in male hamsters, and their hair loss is more prominent.

Read How Often Do You Change Hamster Bedding?

General Overview of the Difference Between Male and Female Hamsters

Let’s sum up the key differences between male and female hamsters one last time in this convenient, easy-to-read chart.

Read How To Make a Hamster Wheel Silent

Like most animals, male and female hamsters differ in their anatomy, and it’s one of the easiest ways to tell them apart. You need to handle your hamster with care when determining its gender.

Follow these proper steps to ensure you manage your hamster correctly so that it stays calm and comfortable and you can determine its gender.

You never want to observe your hamster’s anatomy while it’s sleeping or nervous. Wait until your hamster is calm to look at its genitalia. If you don’t, you could scare your hamster or get bitten while it tries to defend itself.

2. Talk to Your Hamster With a Smooth, Calming Voice

Just like humans, animals can detect fear or concern in your voice, so try to remain calm throughout the entire process. Hopefully, your voice is familiar to your pet, and it will help soothe any nerves your hamster might be experiencing.

If you’re bringing home a new hamster, talking to it frequently will help it get acquainted with the sound of your voice.

You’ll also be able to determine the gender more accurately by holding the hamster upright. Male hamsters can retract their testicles, so keeping them upright will aid in having a male hamster’s testicles come out rather than retract.

Hamsters tend to squirm when laid on their back because it is a vulnerable position. Hamsters bite to protect themselves or when they are nervous or feel threatened. To avoid being bitten, keep your hamster up straight and keep talking to it in a calm voice while you examine it.

4. Keep an Eye on Your Hamster’s Behavior

Keep an eye on your hamster’s behavior while you observe it. Continue to speak calmly so that your hamster doesn’t bite you or try to escape. You may want to offer your hamster treats during this process to relax or temporarily distract it.