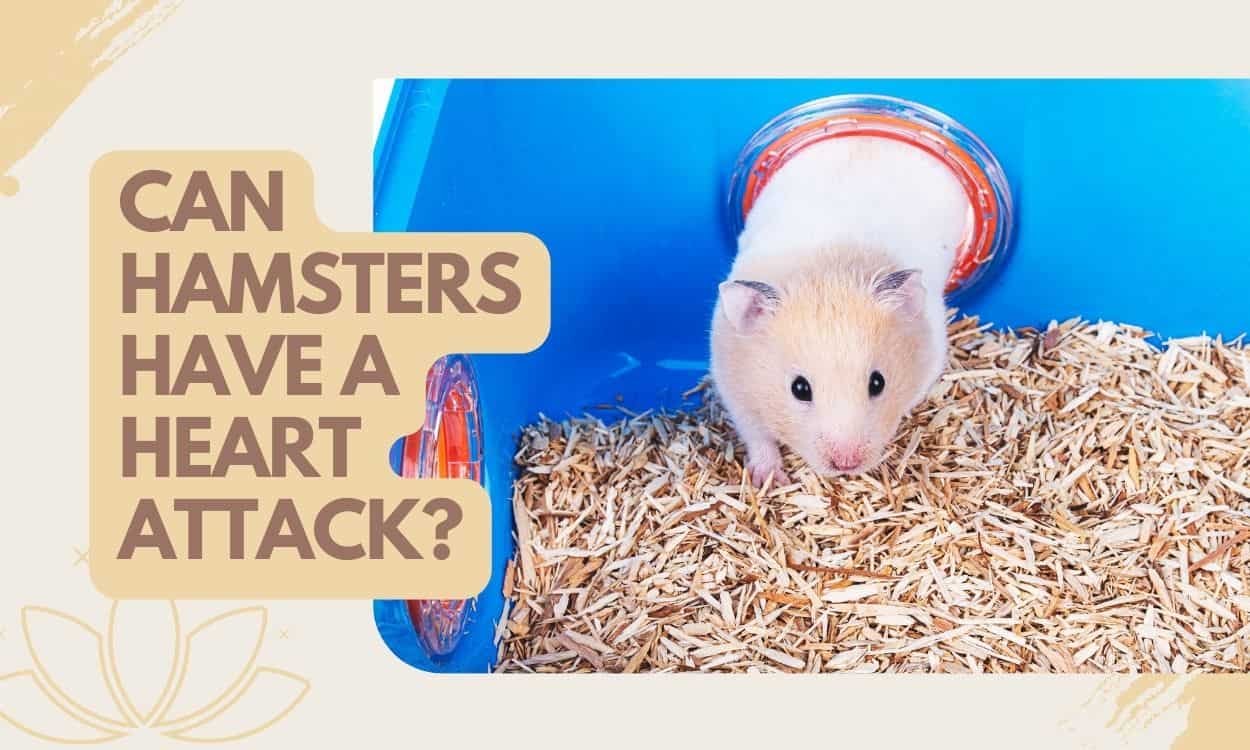 Hamsters may appear tiny, but their hearts work round the clock. Sometimes the elevated heart rate can lead also lead to extreme consequences. So, to answer the question, “Can hamsters have a heart attack?” is yes, they can. Sometimes, they may even occur without warning.

What Causes a Heart Attack Among Hamsters?

Heart attacks typically occur when there’s a hindrance to the blood supply to the heart tissue. There are many underlying causes of heart attacks. Some of them are blood clots, stress, obesity, atherosclerosis, and hidden heart defects.

This condition has to be one of the most common causes of heart failure among hamsters. Since they are super tiny, excess weight places extreme stress on their bodies.

The phenomenon is also called cardiomyopathy. This is when the heart works faster than it should in order to transport oxygen and blood around the body.

A typical cause of obesity is overfeeding. Filling their bodies with fatty nuts, seeds, and sugary fruits is extremely harmful to their health. Due to the gathering of plaque in the arteries, the chances of increased blood pressure and heart attack are quite high.

Not many people consider this factor, but hamsters have strong fear instincts. Since they are habitual in looking out for predators, they’re very sensitive to sounds and lights. As a result, long exposure to such triggers and a lack of a safe environment, in general, can stimulate a heart attack.

Speaking of stress, it’s just as neglected as fear when deciphering heart failure causes among hamsters. While stress isn’t a direct cause of heart attacks, it does trigger underlying issues to assist in the process.

Stress can manifest in many ways. From physical disturbances to mental ones, these factors cause the arteries to get inflamed and unleash harm as a result.

Despite several arguments favoring environmental factors, genetic factors cannot be disregarded. Some hamsters are indeed at a greater risk of having heart attacks than others. Unfortunately, in certain Syrian hamster strains, the condition is often inherited.

A huge chunk of Syrian hamsters suffers from atrial thrombosis. This condition, loosely known as blood clots, is prevalent among old male and female hamsters.

Unfortunately, there is no treatment for it yet. So, all you can do is attempt to make your hamsters comfortable if the condition somehow takes hold.

Chronic heart disease is a well-known cause of heart failure among hamsters. In fact, it can even cause them to die suddenly.

Another lethal cause of heart attacks among hamsters is the accumulation of cholesterol, fat, and other substances in their arteries. When the combination attaches to the artery and becomes thick, there is reduced blood flow. As a result, the blood begins clotting, causing a heart attack.

Muscle spasm is similar to blood clots or atherosclerosis in terms of triggering a heart attack. While it doesn’t often get worse, when it does, the spasm can be strong enough to block the arteries.

How Can You Detect a Heart Attack in a hamster?

If a hamster has a genetic predisposition, it can also experience a heart attack quite abruptly. Unfortunately, in many cases, there is no way to prevent it. In fact, in certain cases, the signs may not even be apparent.

This is because heart attacks typically last between a few seconds and a few minutes. During that time, the owner must be present. However, since hamsters cannot communicate verbally, they often hide any signs of sickness to keep predators away.

Also read: Hamsters and Fleas: A How-To Guide on Getting Rid of the Pesky Pests

What Signs Can You Look Out For?

Sometimes, heart failure symptoms appear after a heart attack has already occurred. Some of them include loss of appetite, irregular breathing, apparent respiratory distress, fast breathing, and a slight blue tint to the gums or skin. If the symptoms aren’t treated in time, hamsters can die within a week of experiencing them.

Is it Possible to Treat a Heart Attack?

In short, No. You must seek a good veterinarian right after noticing heart attack symptoms in your hamster. As with every other lethal medical condition, heart attacks aren’t easy to survive. Those who survive often require extreme care and a decent lifestyle to stay alive following the treatment.

However, make sure to take your hamster to a vet even if you’re slightly unsure about it undergoing a heart attack. Hamsters in pain aren’t easy to handle, and only under professional care can they be dealt with easily.

Give each and every detail about its condition to the vet, and be extra gentle with your hamster during the process. Additional stress will further worsen their condition.

Everything aside, a heart attack is not always a death sentence. In many cases, it is nothing more than a little tissue damage. So, if the vet is able to treat the underlying cause, your furry buddy can live a complete and satisfactory life.

All in all, there is no cure for it. Once a hamster has suffered a heart attack, the impairment will be present for as long as it lives. However, you can take many steps to ensure that it is comfortable.

How Can You Reduce the Risk of a Heart Attack Among Hamsters?

The biggest contribution you can ever make to a hamster’s life is providing them with a clean and comfortable environment. These tiny, sensitive rodents depend on you for their health and well-being.

Here are some steps you can take:

Check out: How Long Do Robo Hamsters Live?

What Food Items Can Elevate their Risk of a Heart Attack?

Now that we have the answer to “Can hamsters have a heart attack? ” it’s imperative that we find ways to avoid the condition.

Contrary to mainstream notions, hamsters hate variety in their daily intake. They prefer simple meals with high nutritional value and often avoid eating anything other than that.

Food is also a leading trigger of certain medical conditions in them. Though it happens indirectly, food can cause obesity which in turn causes heart attacks. Here are the food items you must avoid adding to their diet at all costs.

Let’s start by breaking a myth here. Hamsters are omnivores, but that doesn’t mean they can consume any plant. While celery isn’t toxic, it can cause instances of choking thanks to its string texture.

Yes, potatoes inflict as much harm on a hamster’s body as they do on yours, especially in terms of carbohydrates. Potatoes do not add any nutritional value to a hamster. Instead, they act like fillers and only cause their bodies to chunk up in an unhealthy way.

Who doesn’t love a sugary treat? Hamsters are no different from humans when it comes to craving sugars. However, it is on you to keep the intake limited.

If you have to, try sticking to alternatives such as fruit treats every once in a while. Do not under any circumstance feed them candy or chocolate. Their bodies are way too tiny to process the impact of these synthetic sugars.

Seeds are much more harmful to a hamster’s health than we realize. Not only is there the risk of choking, but seeds are also quite high in their fat content.

Since it’s important to keep their bodies at a good, balanced weight, avoid anything with unnecessary amounts of fat in it. Some of them include pear, cherry, and apple seeds.

So, can hamsters have a heart attack? Yes. Are there ways to avoid a heart attack? Also yes. Raising a hamster isn’t easy. Your tiny furry buddy is much more sensitive to sounds, smells, movement, and change than you realize.

While there isn’t a way to cure heart attacks, you can take steps to eliminate the risk in the first place. However, remember that most hamsters have a short life span, and there’s only so much you can do about it.