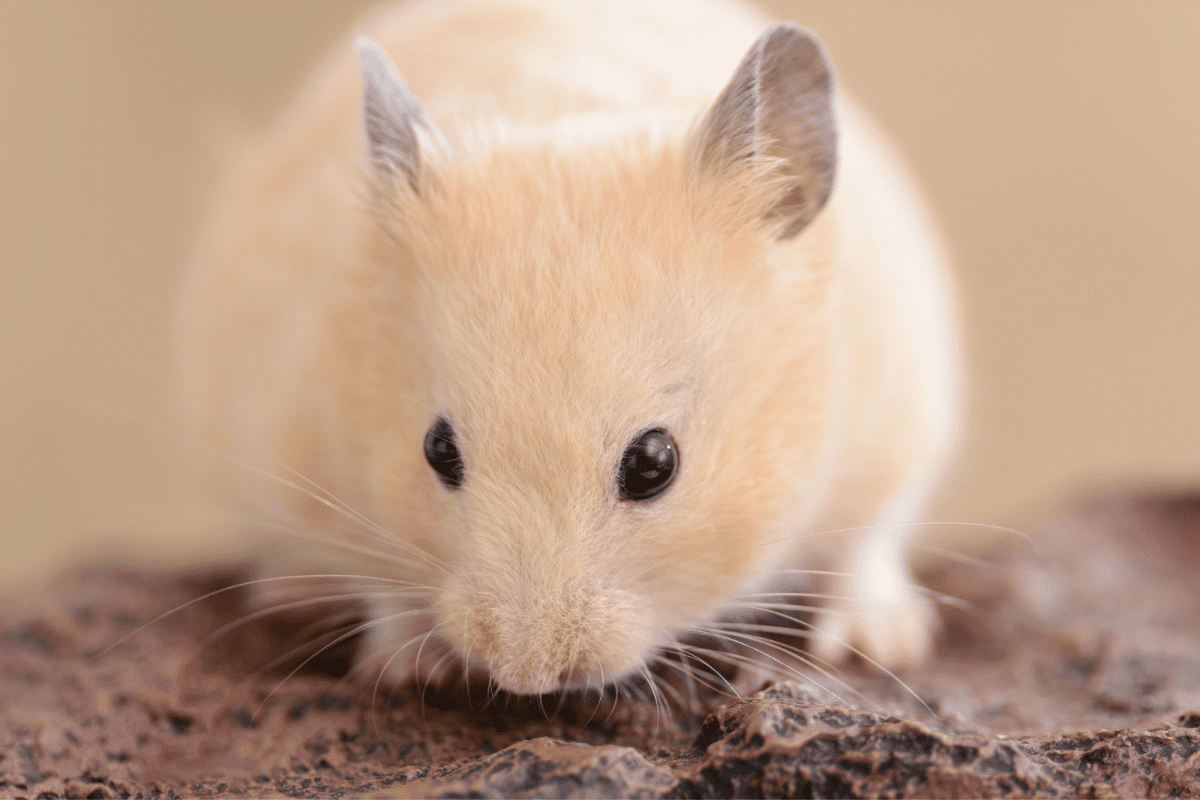 If you have a hamster and have noticed it pulls its poop out, you’re likely confused! It is funny yet odd to witness, and there is a reason for it. So, why do hamsters pull their poop out?

Hamsters pull their poop out so that they can eat it, throw it, or store it somewhere. They primarily pull their poop out to eat it when they want to get the nutrients they may have missed out on before. They do this by placing the poop directly into their mouths after pulling it out.

The rest of this article will discuss why hamsters pull their poop out in greater detail. It will also discuss whether it’s safe or not, whether they enjoy it, and if it’s possible to stop them from doing it.

Is It Normal for Hamsters To Pull Their Poop Out?

Although this is normal for hamsters, many people don’t realize it! This is because people don’t watch their hamsters 24/7, so they may not even know it’s happening.

The official term for eating feces is coprophagy, and there are many animals other than hamsters that practice this technique, including man’s best friend, the dog.

Hamsters can often tell whether their poop is worth eating or not by the texture and smell. If they sense that there are plenty of needed nutrients leftover, they will be happy to eat the poop.

However, they likely won’t eat it if it’s low in nutrients. If this is the case, you may notice them flinging it around rather than eating it.

Although they mostly pull out their poop to eat it, they may pull it out and not eat it. If they do this, they may have realized after pulling it out that they don’t want to eat it due to the lack of nutrients. Alternatively, they may wish to store it for later.

These are all typical actions and shouldn’t be a cause for concern.

Many people assume their hamsters are constipated if they notice them pulling poop out; this assumption is a logical one, but it rarely is the case.

You may be worried that your hamster is uncomfortable and unable to poop if you notice it pulling it out, but luckily, it’s likely fine.

You should only be concerned if you notice poop is stuck halfway out for more than a few minutes, and your hamster doesn’t seem to be pulling it out. In this case, your hamster may be constipated, dehydrated, and is likely uncomfortable.

If you have any significant concerns, you should speak with a vet.

Is It Safe for Hamsters To Pull Their Poop Out?

It’s safe for hamsters to pull their poop out. Since the poop is fresh, your hamster won’t get ill from handling it. However, it isn’t healthy for hamsters to be living with poop for extended periods. You should clean out any leftover poop every few days to keep your hamster clean and healthy.

Of course, it wouldn’t be healthy or safe for humans to do this, but hamsters are different. It may seem gross, but it’s perfectly typical behavior for hamsters to handle and eat their poop.

The most important thing to remember is that many hamsters do this, and it is completely safe and normal!

Pee Is More Unsafe Than Poop

A hamster’s pee is more unsafe than poop, believe it or not! Since pee is wet, it can make your hamster sick more easily than poop. So, if you notice your hamster peeing in its bedding, you should remove the soiled bedding as soon as possible.

Generally, hamsters will choose a specific spot in the cage as a designated ‘toilet.’ This is where they should pee. However, some hamsters may pee in different parts of the cage, so you’ll need to keep an eye on where it’s peeing. If it just pees in one specific cage area, you won’t need to clean it out too often.

However, if it pees in its bed all the time, you should consistently remove any damp bedding.

Read Can You Die From a Hamster Bite?

Is It Healthy for Hamsters To Eat Their Poop?

So, eating poop is quite a nutritious activity for hamsters!

Although it is safe for hamsters to eat their poop when it’s ‘fresh,’ it isn’t as safe to eat if it has been sitting out for a few days or weeks. Poop that has been lying around for days can develop bacteria, which can end up harming your hamster.

If your hamster eats old poop, it can get seriously ill, so you should always ensure that no poop is left in the cage for too long. Hamsters sometimes like to store their poop for later, which is okay if they eat it soon.

However, they may want to eat it a few days or weeks later, which is not okay. You should keep an eye on the cage; some hamsters may decide to hoard poop, which can end up causing diseases like wet tail. It would be best to clean the cage regularly to avoid any illness.

Read Where Do Hamsters Live in the Wild?

Can You Stop Hamsters From Pulling Their Poop Out?

You can’t stop hamsters from pulling their poop out because it’s an instinct. Additionally, you may scare your hamster if you attempt to prevent it from pulling poop out, so you should avoid doing this.

You may be tempted to stop your hamster from pulling its poop out because it seems gross and wrong, but it is entirely normal for hamsters! Since your hamster isn’t doing anything wrong, you shouldn’t try to stop or punish it.

Hamsters enjoy eating poop if it is soft and nutrient-rich. Like humans, hamsters only eat what they find tasty, so they wouldn’t eat it if they didn’t like it. If they have particularly dry poop, they likely won’t eat it because it won’t be as enjoyable or nutrient-rich feces.

So, you could say that hamsters enjoy eating some poop, but not all types. You’ll know whether your hamster enjoys it or not based on if they swallow the poop or not!

If you live anywhere within the United States and are looking for healthy everyday food for your hamster, you should try something like the Wild Harvest Hamster & Gerbil Advanced Nutrition Diet, available now from Amazon.com. There are several sizes to choose from, and they’re all relatively reasonably priced.

Hamsters Will Spit Out Poop if They Don’t Like It

If a hamster places food in its mouth and then realizes it doesn’t like or want it, it will likely spit it out; this is normal and nothing to be concerned about! The same is true of feces.

It simply means that it doesn’t have the nutrients the hamster wants and possibly doesn’t taste nice. Alternatively, the hamster may decide to throw the poop with its hands; this is also normal.

Why Do Hamsters Poop in Their Beds?

Hamsters poop in their beds if they plan on eating their droppings at some point. Unlike humans, hamsters don’t view poop as gross, so they don’t mind keeping it in their beds and sleeping next to it.

It’s normal for hamsters to do this. Not only do they do it because they like to eat it, but it also gives them a sense of comfort. Hamsters have lousy eyesight, so they find their way around primarily through smells.

So, the smells help them and make them feel safe. For that reason, you shouldn’t remove the poop from the bedding every single day. However, if it’s particularly wet, you should remove it soon because this is more likely to cause wet tail.

But if the poop is mostly solid, it’s okay to leave it in the bedding for a while. However, it would be best if you cleaned it out once every few days.

Why Do Hamsters Throw Their Poop?

Hamsters throw their poop around if they’re bored or if they tried to eat the poop but didn’t like it. It is normal for hamsters to do this, and it shouldn’t be a cause for concern.

Many people across the United States experience their hamsters throwing poop around, which you can see from this hamster forum. Luckily, it’s okay to watch and laugh because it’s not harmful to your hamster.

Often, hamsters like to throw their poop around if they are bored and want to play. You need to be careful when you’re near the cage; you certainly don’t want any poop shots headed your way.

Another thing your hamster may do is strategically place or throw its poop somewhere specific in the cage; this could be for a territorial reason. Or, it may be because your hamster wants all its poop in the same spot.

Some hamsters may pick their poop out using their mouths and then throw it away. In this instance, it means they don’t like the poop and want to get rid of it.

If you notice your hamster putting poop in its food bowl, you’re probably worried and wondering whether you should take it out or not. Truthfully, you don’t need to remove it, and it’s normal for some hamsters to place poop directly into their food.

Since hamsters often view their poop as food, it’s normal for them to mix it in with their regular food. It’s healthy for them, so there’s no need to be alarmed.

However, if you notice your hamster keeps poop near its food but never seems to eat it, you should eventually get rid of it.

Read How To Tell If Your Hamster Is Sick?

Healthy hamster poop should look dark. It should also be firm and in the form of small pellets. If your hamster’s poop is wet and lighter in color, it indicates diarrhea. Diarrhea can lead to wet tail, so you should speak with a vet if your hamster has diarrhea.

If your hamster pulls out small, firm pellets, there is nothing to worry about. But if soft poop or liquid poop comes out, that is cause for concern.

Generally, diarrhea is caused by viruses or a diet with too many greens. Try to feed your hamster more pellets if you’re feeding it too many green vegetables; this should solve the issue unless it has a virus or other illness.

If your hamster is pulling out its poop, it’s unlikely that it has diarrhea because it would be too wet for your hamster to pull out; instead, it would fall out by itself.

Here are the most important things to remember:

If your hamster has diarrhea, or if you have any concerns, you should contact a vet.