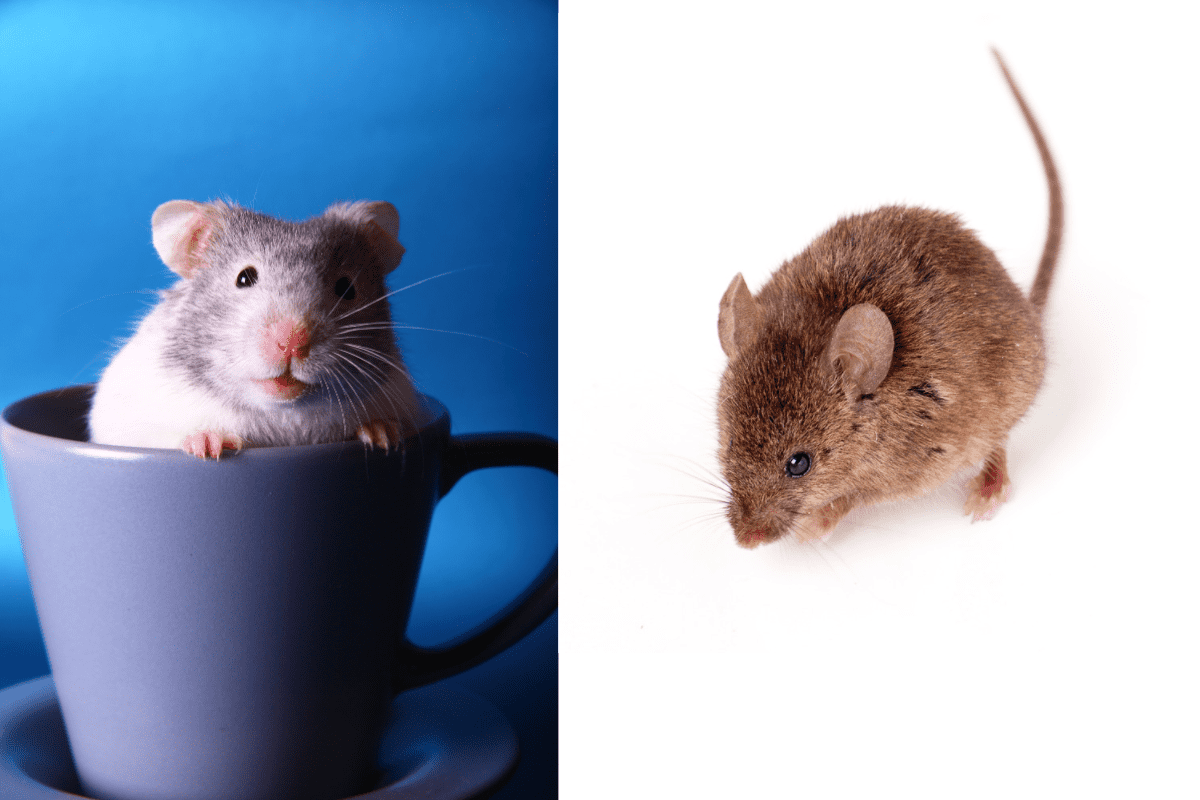 One question “pocket pet” enthusiasts will eventually ask is, “What is the difference between a hamster and a mouse?” While both species are cute, small, and popular as first-time pets all across America, they have many differences that distinguish them as animals.

The word “Muridae” means “mouse,” and the Muridae family only includes “true mice;” meanwhile, the Cricetidae family of rodents includes not only hamsters but also rats, lemmings, and voles.

Caring For a Hamster Vs. Caring for a Mouse

Probably one of the biggest differences between hamsters and mice is their care. While the two animals look similar, they have different dietary needs, ways of socializing, and habitat requirements. Such differences make caring for a hamster versus a mouse quite different!

As with any new pet you intend on welcoming into your home, hamster care has to be taken very seriously. Hamsters are anxious and easily stressed animals, which can lead to health complications and even fatalities down the line.

To keep your hamster happy and healthy, you must understand how to care for it. Here is a quick rundown of the basics to get you started: 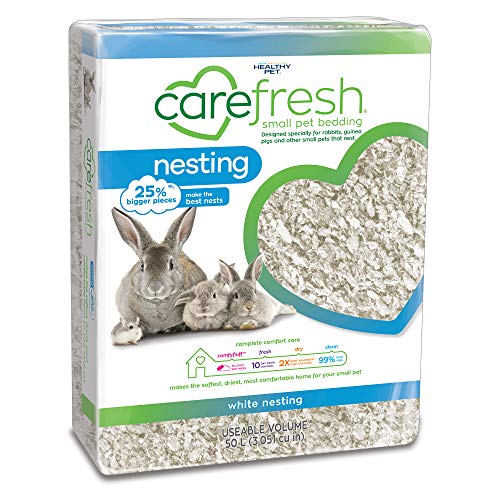 Unlike hamsters, mice are very social and have different needs when it comes to habitat and entertainment (bedding is about the same). Here’s a quick overview:

As you can see, hamsters and mice have similar care needs that are just different enough to warrant consideration when choosing one for a pet.

The hamster is likely going to wind up the more expensive of the two, especially with its penchant for anxiety and anxiety-induced illnesses.

Though hamsters and mice look very similar, they have many physical differences. For example, hamsters are shorter than mice. Hamsters have shorter (and broader) bodies, shorter legs, and shorter bald tails.

Meanwhile, the average mouse’s body is slender and long, with longer legs and a longer tail.

Though hamsters are “fatter” and shorter, mice have more oversized ears and eyes. This is only on average, as some hamsters have very large ears. Hamsters also have poor vision and are colorblind.

While fancy mice (domestic mice) can come in various colors, wild mice are typically one uniform color across their bodies (either brown or gray), as this helps them better blend with their environment and hide from predators, especially since they tend to burrow in the ground.

Hamsters tend to come in brighter colors, though there are some darker variations, like the Black Bear Hamster.

The standard and best-known hamster, the Syrian hamster, is the most commonly kept pet in America and is known for its golden fluffy appearance, with variations including a white body with a gold head or a fully white body.

Read Why Do Hamsters Pull Their Poop Out?

Though I mentioned the differences between the two rodents’ tails up above, there is such a difference between them that it warrants its own section.

As mentioned before, mice have long bald tails while hamsters have short bald tails. A hamster’s tail is so short it’s typically only a few centimeters long!

The reason for the difference in length is the need for balance. While hamsters love scurrying through plastic tubes and running in wheels, mice are actually more active and athletic. So it only makes sense that they would have evolved to grow longer tails.

Given that circus mice are famous for their tricks, it may come as a surprise that hamsters and mice would require different habitats.

After all, hamsters are as clever as mice and also enjoy toys and fun objects to climb. But as mentioned in the last section, mice are more acrobatic and energetic.

The main difference in the habitat needs of a mouse and a hamster comes from the fact that hamsters are almost fully domesticated now, while many wild hamsters are on the endangered species list.

However, wild mice and domestic mice both exist simultaneously and in abundance.

Whether domesticated or in the wild, the average hamster enjoys a nest and a quiet environment. This is why zoologist Aharoni found his hamster and her offspring in the middle of a wheat field!

Mice are similar but more adaptable, meaning they are more willing to nest in noiser areas than a hamster.

The dietary needs of hamsters and mice are one of their fundamental differences and are probably why you are more likely to find a mouse in your garbage than an escaped hamster.

Hamsters have evolved to hide food in their cheeks and store it for later consumption to avoid predators.

The hamster’s evolutionary cheek-stuffing behavior is one of the main reasons the diet of a hamster and a mouse differs so significantly: hamsters could not successfully store dead insects or smaller rodents for later consumption, but fruits and vegetables and seeds are easier to store.

In fact, storing meat would just draw more predators, the exact thing a hamster is looking to avoid!

The average hamster prefers clean, fresh food, such as:

Though hamsters love fruit, you should only give it to them in moderation since they are prone to diabetes, unlike mice, who can thrive on sugar and fruit.

And though domesticated hamsters are vegetarians, wild African hamsters have been observed hunting insects in packs.

The mouse, much like its cousin the rat, will eat a wide variety of foods, including whatever it happens to stumble upon in the wild. Mice are omnivores, meaning they will eat:

Their preference for grains (and electrical wiring) is how mice have gained a reputation as pests. They would target gardens and crops, causing devastating damage.

They are more drawn to chocolate than cheese (their commonly believed “favorite” food) and are likely to eat almost anything they find, including food in the garbage.

During times of desperation, mice have even engaged in cannibalistic behavior, eating their own tails and offspring.

Read Why Is My Hamster Not Eating?

Hamsters and mice have personalities that are practically opposites. For example, hamsters don’t mind being handled and are friendlier, while mice are more cowardly, shy, and nervous.

Hamsters are also solitary, while mice are more social and prefer to live in large groups. You can’t house two hamsters together unless you intend to breed them, given that the hamsters will fight each other for space and resources, no matter how large the cage or abundant the resources.

Hamster fighting likely comes from the fact that hamsters evolved to store food in their cheeks and hide the food in secret places. A hamster stumbling across another hamster’s food cache would trigger a fight if one were caught stealing from the other.

On the other hand, mice tend to eat food as they find it, rather than storing it for later. This means that mice are more prone to sharing with other mice and, as a result, evolved to be more social.

Read Can You Die From a Hamster Bite?

Owning a Hamster Vs. a Mouse

So, now that you know the differences between a hamster and a mouse, you’re probably wondering which one to keep as a pet. Though hamsters can become sick or stressed easily, both hamsters and mice are low-maintenance pets that don’t require much in the way of housing and feeding, and they each have their pros and cons.

A con of keeping hamsters, for instance, is that hamsters are solitary creatures, so if you want to keep more than one, you’ll have to buy multiple cages. Mice, meanwhile, will happily live in groups.

Hamsters are also more welcoming when it comes to physically handling them, whereas mice are shy and more easily frightened. Their willingness to be handled (and the mouse’s reputation as a pest) is one of many reasons hamsters are more popular than mice as pets.

In the end, both pets have their pros and cons, and you should choose one according to your needs. If you want a pet you can touch and handle, then hamster it is. But if you prefer a pet you can observe without handling, then a mouse is ideal. Choose what’s right for you!

So in conclusion, while hamsters and mice are both rodents and have a few similarities, they are actually quite different in dietary needs, social needs, and temperament. Choosing one as a pet relies on your needs as an individual.