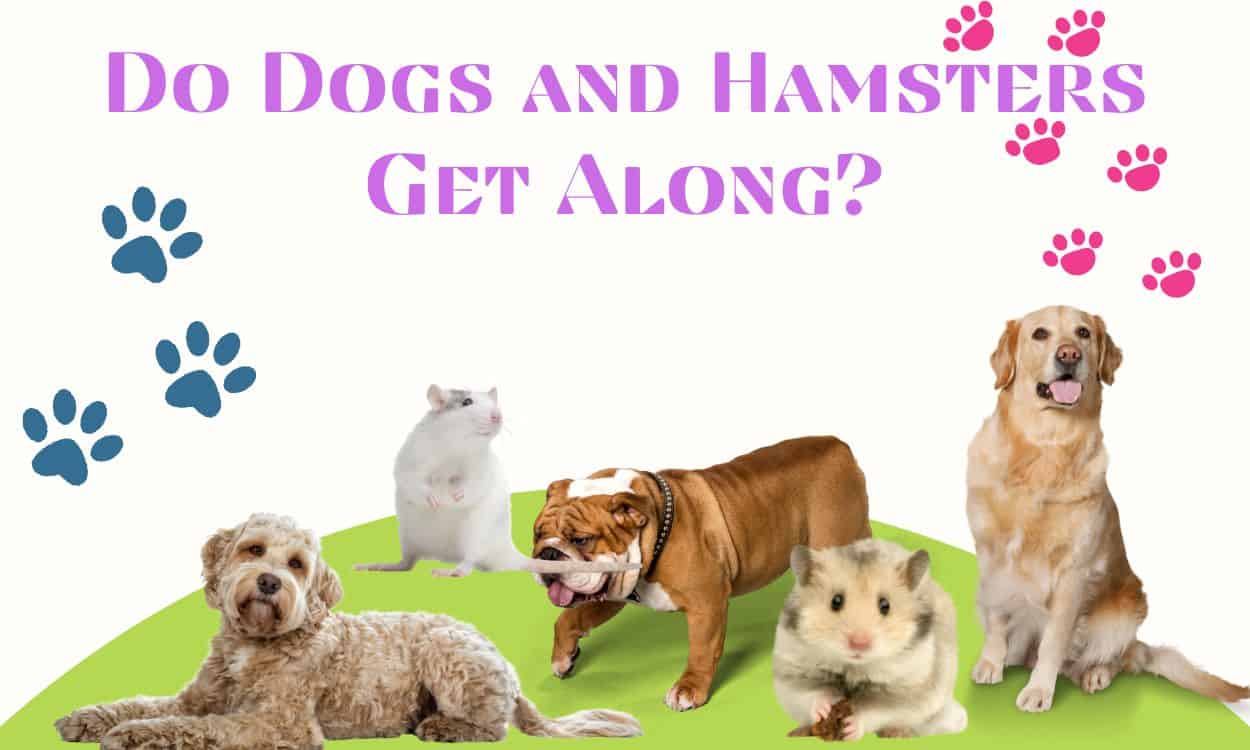 Many homes with dogs also have other pets because they enjoy the companionship of other animals just as much as their canine friends.

It is not uncommon for family members to have the urge to care for and adore their very own pets. In a typical home in the United States, you’ll find both a dog and a hamster.

Why shouldn’t they? They are both so entertaining, and they make fantastic playmates and pets. Our four-legged friends are dedicated, lively, and overflowing with affection.

Where may things possibly go wrong? Who among us doesn’t find it entertaining to watch a hamster go about on his wheel or cross a maze made of tubes?

But this raises the question: would a hamster and a dog get along? Let’s get into it!

Will Your Dog Hurt Your Hamster?

What is it about my hamster that fascinates my dog so much? Dogs have the potential to develop an unhealthy preoccupation with anything, including old socks, grass, rocks, small puddles of water, and, yes, even small creatures. Wolves are the canine ancestors of domesticated dogs.

This indicates that they descended from the most powerful predators that roamed the wild. When hunting in packs, wolves can bring down prey significantly larger than themselves with relatively little effort.

Keeping all these natural factors in mind, it is not difficult to imagine what your hunting dog thinks when confronted with other small prey animals in the house, such as the rabbit or the hamster.

There are indications that your dog may be becoming more vigilant and interested in the hamster or hamsters in your home. It would help if you were wary of any increase in your dog’s interest in your smaller pets, as this could indicate that your dog’s predatory tendencies are intensifying.

Keep a Closer Eye on Your Dog and Hamster

If you’re not careful, your dog may lose control and bite your hamster. If you’ve read anything else, you probably already know that nobody is to blame if something like this occurs.

You, as the owner, have the authority to prevent this from happening. The positioning of your hamster cages should be your first consideration in this regard.

Smaller animal cages should be kept in an area where dogs cannot quickly get them. You can also place them in an area your pets are not supposed to enter.

Stirring is a notion in animal psychology that outlines how suppressed instincts that aren’t usually an issue emerge as a response to stimuli. Imagine yourself as the alpha of the pack, in command of your dog in a situation where there is always food available.

The dog would have no issue following the pack structure with you at the helm. But what if you had to deal with new stimuli? What does it indicate when your dog recognizes a change in his surroundings?

Can the Dog Harm the Hamster?

Dogs who grow interested in hamsters will show indicators of alertness and activity. These dogs will stand up straight, with their ears and tail elevated. Once your dog discovers the smells and noises, it will begin looking for the source of the smells and sounds.

Everything begins to alter at this point. Some dogs will lose interest in hunting prey animals if they are psychologically stable or have been conditioned to do so and if they are satisfied with their current diet.

However, even slight environmental pressures, such as competition with other dogs, can induce a significantly more powerful manifestation of the hunting drive to emerge and take control.

You should also be aware that your dog will be quite excited now that it is taking part in “the hunt.” Not all signs of enthusiasm immediately harm your health, at least not at first.

If your dog’s demeanor expresses delight and enthusiasm, you shouldn’t be concerned about your hamster’s well-being.

The difficulty emerges when the transition occurs, and your dog is no longer content with simply being curious. What should you do if your dog suddenly develops a desire to bite?

Check this: Can Baby Hamsters Survive Without the Mother?

Protecting Your Hamster from Your Dog

There are also some other considerations to be made. Selective breeding has maintained the hunting instinct alive and well in specific dog breeds, which explains why certain canines are more inclined to want to go hunting.

Even in a domestic or home setting, hunting dogs are more likely to engage in predatory behavior since their human masters have educated them to hunt down ducks and other prey.

The second factor to explore is the potential that the dog is benefiting from acting on its natural impulse to hunt. We will never know when this happens because dogs are nonverbal and cannot express their emotions.

The third component is opportunity. Certain breeds of dogs feel an incredible sense of emancipation when they can hunt their prey.

Again, this happens naturally to them since they are predatory animals in the first place, and it is only natural that their brains are wired in this way.

How to Ensure Your Dog and Hamster Get Along

When a hamster and a dog share a home, there are a lot of advantages to be had.  Despite what you may have read about hamsters and dogs getting along well, you shouldn’t keep your hamster in such a home. It is important to teach your dog to be kind and protective of your hamster.

The animals’ veterinarians recommend that you be ready in advance to protect their health and safety. Consider whether your dog’s temperament would be suitable for a little pet. Assessing the other animal’s health is the next step in stopping the spread of disease or fleas.

To ensure the welfare of all the animals involved, it’s preferable to introduce them slowly. Let your dog smell the hamster’s scent first to begin the introduction process.

Please keep your dog on a leash and your hamster safely ensconced in his cage whenever you share a room. Make sure the dog can’t reach the cage!

After a few minutes of keeping the dog at arm’s length from the hamster, you should take him out of the room.

These brief introductions should be done twice daily for three to five minutes, with breaks introduced when the interest level drops between sessions.

Give your dog a treat for being well-behaved around the hamster. Always put your protection first. The hamster’s cage should not be put in a location where it may be knocked over easily.

Hamsters can escape easily, so if yours ever has the urge, you may want to keep the entrance of his cage shut.

Click to read: Sunflower Seeds: Are They Good or Bad for Your Hamster?

Can Dogs Live with Hamsters?

The size of a dog and that of a hamster is extremely different. Accidents can occur even if you have the calmest and most well-behaved dog.

A dog can assume it is just playing when it pounces on a hamster; nevertheless, this would not be beneficial for the hamster in any way. You also need to be conscious that dogs have the instinct to hunt.

Could they form a friendship? Absolutely, but only from a safe distance. On the other hand, a dog and a hamster can share the same home so long as the hamster is kept in a room with a door and a good enclosure.

After this one, one of the most asked questions is will my dog eat my hamster?

Certainly not! The dog can identify the hamster as prey by sight and smell. The dog will therefore pursue the hamster. The dog would probably grab the hamster if it got into its cage and bring it back to you.

As a result of the dog’s size, the hamster certainly sustained lethal injuries. After all, dogs are big compared to hamsters.

Keep your hamster secure by permanently closing the door to its cage and using a high-quality enclosure with enough ventilation. This setup will allow the dog and the hamster to live happily in the same house.

Can Dogs be Jealous of Hamsters?

Yes, dogs can be envious of hamsters and even other dogs. A jealous dog may act aggressively against the competing pet and may exhibit signs of seeking to impose itself on you to receive more affection and attention from you.

This is connected to the social bonding between an owner and their pet, and regardless of the size of other animals, your dog may be hostile toward other species of pets.

The question that needed to be answered was whether hamsters and dogs could coexist. We have found that dogs and hamsters can coexist in the same household, although they are unlikely to become close friends. Because canines have a natural urge to hunt, the hamster may be put in harm’s way.