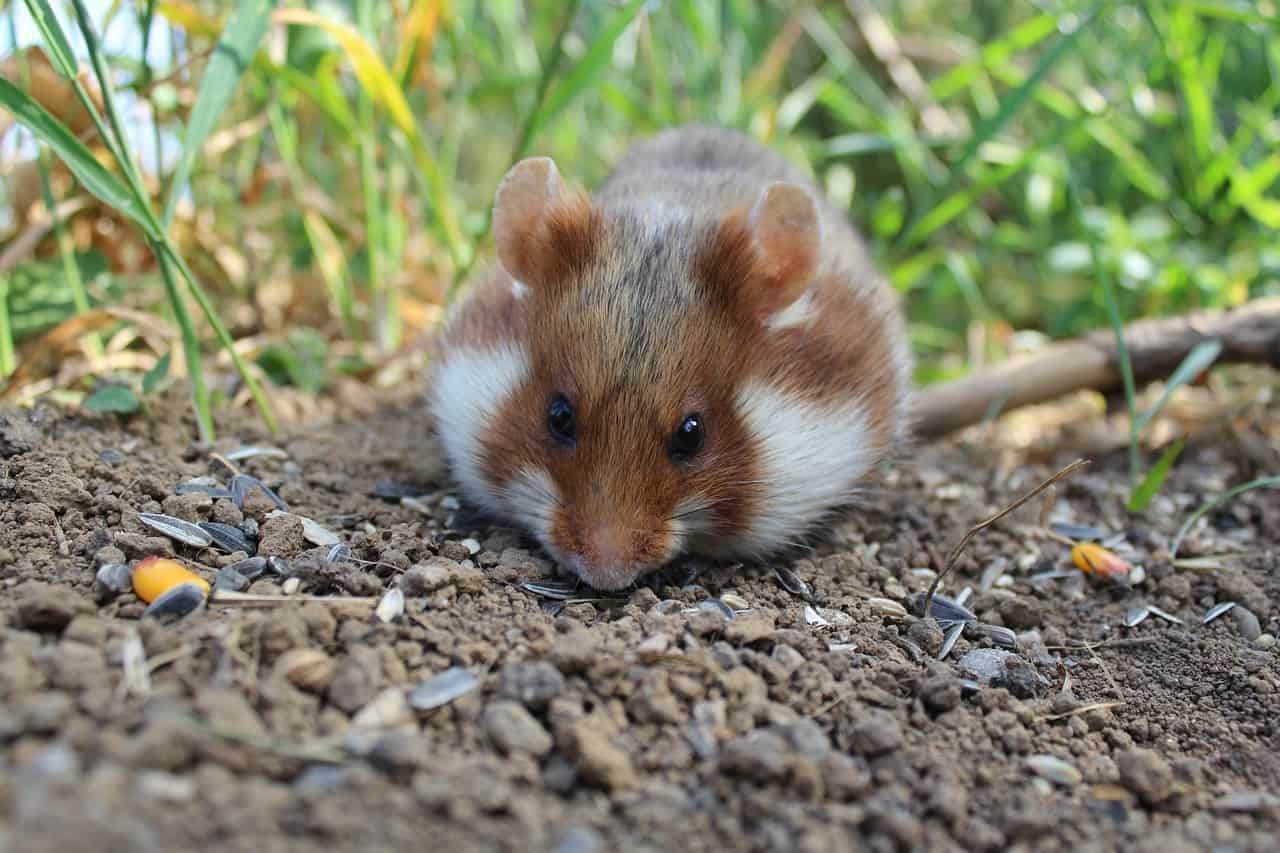 Hamsters are one of the most common family pets in the U.S., and given that they’re playful, small, and relatively low-maintenance, it isn’t difficult to understand why. However, considering they’re such a popular pet choice, it can be crucial for owners to understand the noises their hamsters make and what they might mean. For example, did you know that hamsters hiss?

Hamsters hiss to show aggression and fear. A hiss usually means that something is making them feel scared or threatened, and the noise is their way of attempting to show the emotion they’re feeling or warn off a potential threat.

In this article, I’ll be diving into more detail regarding when and why hamsters hiss, how you can prevent it from happening and what other noises your hamster might make.

When Do Hamsters Hiss?

Hamsters generally hiss when they’re scared or angry, similar to when other animals might growl. This noise indicates that the pet is in the presence of an unpleasant external factor, which should be removed immediately.

In the wild, hamsters are tiny prey animals who live mostly solitary lives.

They don’t have many defense mechanisms to rely on since they’re so small and don’t live in colonies like other similarly-sized animals like prairie dogs or meerkats.

Therefore, hamsters have a keen flight response, making them quick to respond to anything they perceive could be a danger.

To survive, this response has, in some ways, become overactive over time, which means that your pet hamster might perceive even the most harmless phenomenon as a potential danger.

While prolonged feelings of unease and danger are likely to result in a perpetually anxious hamster (as they won’t feel safe enough to relax), they’ll likely hiss at the individual threats they face even if they’re occurring for the first time.

However, hamsters can also hiss when they’re feeling sick.

In these cases, not feeling well will likely make your hamster feel more aggressive and alert to possible dangers because, in the wild, a sick animal is more likely to be hunted.

Some situations that could cause your hamster to hiss include but aren’t limited to:

Read How Much Should I Feed My Hamster

Why Do Hamsters Hiss?

Hamsters hiss because they’re in a stressful or scary situation. However, these situations might just appear scary to your hamster, while the real threat might not exist. This is usually, but not always, due to a hamster’s history of neglect.

Unfortunately, it’s common knowledge that pets are neglected every day by careless or cruel owners, with Delaware being the leading US state in animal cruelty rates.

Though hamsters don’t live that long (typically living up to 4 years at most), you’d be surprised how much mistreatment and neglect they can undergo throughout their short lives.

If a hamster has a history of being neglected or mistreated, this could cause them to develop an easily triggered fear-response and thus hiss more often than your average playful pet.

Though not always the case, if your hamster is particularly anxious, they might have been mistreated or otherwise traumatized before they came into your care.

Not all innate fear responses are due to neglect.

It can be challenging to pinpoint exactly what might have caused your hamster to develop an easily-triggered aggressive response when it comes to trauma.

The reason behind this goes back to the fact that hamsters are naturally preyed upon by multiple other animals and find themselves near the bottom of the food chain.

Since hamsters are innately prone to being alert to danger, they could interpret anything as a threat.

If exposure to this threat is prolonged, the hamster could get used to the “threatening” stimuli, or they could develop long-term anxiety and trauma from it.

For example, if a hamster’s cage is near a washing machine, the sound of the machine turning on could be interpreted as a threat.

If the hamster’s owner doesn’t notice them becoming stressed, they might not move the cage to a quieter location, causing their pet to have long-term exposure to the scary sound.

If the hamster never gets used to the sound, they could develop a stress response to similar noises or situations.

Therefore, even if their cage is moved away from the washing machine eventually, they might hiss at a fan that makes a similar noise, or the sound of a blender, etc.

Unfortunately, not all hamsters are the same, so it can be difficult to predict what a hamster might react negatively to.

You might have had a hamster that was able to tolerate being in a cage near a window overlooking a busy street perfectly.

However, your newest pet may hiss every time a car drives by.

As I previously mentioned, while a history of trauma can facilitate a hamster reacting poorly to stimuli, it isn’t always necessarily the case.

Like humans, some hamsters are just prone to having fear responses, which means they’ll likely be inclined to hiss.

Read Why Is My Hamster Bleeding From Its Bottom?

How To Stop Your Hamster From Hissing

While hissing is a natural sound that hamsters make from time to time, no one wants their pet to be upset or scared.

Fortunately, there are a few measures you can take to help prevent your hamster from hissing or being in a situation where that would be their natural response.

What To Do if Interacting With You Caused the Hissing

As a caring pet owner, if you hear your hamster hissing, you’ll likely want to make them stop.

The first thing to do if you hear your hamster hissing is to determine what it’s hissing at , if possible.

If you were in the room interacting with your hamster when the hissing started, determine if any changes occurred.

Start by trying to revert the external conditions to how they were before the hissing started.

Perhaps they got spooked by something, or you touched them when they weren’t expecting it.

Putting your hamster back in the situation they were in before they started hissing might help them calm down.

It’s also important that, if you are touching your hamster, you do so gently, and you speak to them softly and calmly.

Loud noises might trigger fear in your hamster, particularly because you’re so much larger than they are.

If that doesn’t work, try to put your hamster back in their cage to see if that will calm them down.

Read How To Train Your Hamster To Cuddle

What To Do if Socializing Is Causing the Hissing

If your hamster is used to being alone or with just you, introducing them to other people or animals might be difficult to adjust to, especially if your hamster wasn’t socialized at a young age.

A hamster that has been poorly socialized might hiss at other people or animals because they’re considered strange and threatening.

If you notice this to be the case, when you see your hamster hissing, try to remove them from the stressful situation immediately. You can put them back in their cage or somewhere else they’ll feel safe.

However, while it’s important to remove your hamster from a stressful situation like this, you should also make an effort to socialize your pet.

Luckily, doing so doesn’t have to be too challenging, even if it’s going to take time.

Slowly expose them to other people for small intervals of time.

You can start by putting your hamster in a hamster ball or smaller cage in an area where they’ll be able to see other people and pets while still feeling safe.

You can slowly build up the amount of time your hamster spends around others until they no longer show signs of aggression or fear.

Then, repeat this process while continuously bringing your hamster closer to other people.

With time, your hamster will, eventually, become more socialized and should stop hissing at others.

Read Why Is My Hamster Limping?

What To Do if Your Hamster Is Scared of Something

If you notice that your hamster is hissing at something in its environment, the solution could be simple.

If what they’re scared of is something that you can move or get rid of, then doing that should stop any current or future hissing from occurring.

However, if your hamster is scared of something you can’t get rid of, like the washing machine example I used earlier, then the situation becomes a little more difficult.

Once you’ve determined what your hamster is scared of, you can try to move them away from what’s causing them to hiss.

However, if that still doesn’t work, for example, if there’s a noise your hamster can still hear, try to see if you can minimize your hamster’s exposure to what’s scaring it.

If it’s a sound, look for a way to soundproof the area so they don’t hear it as much.

If your hamster is scared of a particular visual stimulus, try to keep your hamster from being in a situation where they would have to look at what’s scaring them.

Minimizing exposure might still result in some hissing, but it will allow your hamster to relax while also potentially acting as a sort of exposure therapy.

That way, your hamster can acclimate to what’s scaring them.

Read How Long Should a Hamster Be in a Ball?

What To Do if Your Hamster Is Sick

If you can’t find anything that might be scaring your hamster, for example, if nothing in their environment has changed, but they have suddenly started hissing, your hamster might be sick.

If you notice other signs of your hamster feeling ill, for example, if they’re no longer grooming properly, not eating, or sleeping too much, it might be time to talk to a vet.

Taking your hamster to the vet as soon as they show the first signs they might be feeling sick will give them the best chance of getting healthy again, which will make the hissing stop as well.

If you’re planning to be a first-time hamster owner or you’re worried about making sure your pet is comfortable and relaxed, here are the steps you can take to prevent them from hissing in the first place:

What Other Sounds Do Hamsters Make?

Other sounds hamsters make include squeaking, bruxing, crying, and chirping. Each of these noises signifies different emotions and physical states, which is why getting accustomed to them and what they mean is a must for every hamster owner.

Here’s what you’ll want to know about these other sounds your hamster might make:

A hamster hiss is never a good sign. Usually, when a hamster makes this sound, they feel scared or threatened; however, they might also feel sick.

No matter what the case is, if you hear this noise from your hamster, it’s important to determine the cause in an effort to return your pet to its normal, happy-go-lucky state.